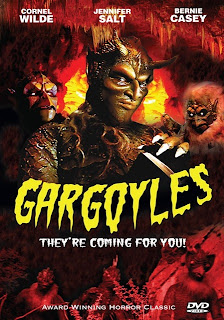 
Over the past few months I’ve watched a number of American TV horror movies from the 1970’s and 1980’s in a bid to bolster the cult television section of the site. On my journey it has become impossible to ignore the most recurrent feature of these old ’movies-of-the-week’; namely that the quality and effect of many of these films have been grossly exaggerated by the nostalgic twittering of writers/reviewers who now seemingly find it impossible to be objective about them. Thus far I have only come across a select handful of these movies that live up to the unhelpful hype and stand up to modern scrutiny; both Duel (1971) and Dark Night of the Scarecrow (1981) remain towering examples of the form, and anything with the name Dan Curtis attached to it offers a seal of quality that was not replicated elsewhere. The latest allegedly brilliant and/or terrifying TV horror movie to cross my desk is Gargoyles, which was broadcast on CBS in November 1972. The most distinguishing feature of this patchy 74 minute effort is the excellent costume design and special make up effects created by Stan Winston; the most impressive of which is rightfully reserved for the lead gargoyle played by Bernie Casey. You can always tell a film is in a spot of bother when the best thing about it is a costume! I had no option to conclude that Steven and Elinor Karpf’s pitiful and laughable screenplay was totally undeserving of Mr. Winston’s inspired efforts. 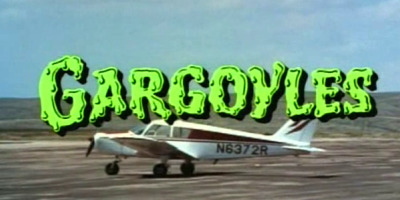 In addition to employing the talents of Stan Winston, another good decision was to shoot entirely on location in Carlsbad, New Mexico and in Laredo, Texas. The dusty and mountainous desert landscape makes for an evocative space, even if the basic premise of a colony of living gargoyles hiding out in the hills is patently absurd. The film opens with an imaginative and apocryphal prologue which charts the history of the winged fiends; it employs voice over narration, and blends a myriad of paintings, illustrations, carvings, and one or two tantalising shots of Winston’s creations to give the audience a sense of their ancient satanic evil, and their ancient struggle for survival. This is a very colourful and distinctive manner in which to begin a TV horror movie, and kudos to the filmmakers for employing an interesting strategy to kick-start the narrative. But things soon go awry with the introduction of Dr. Mercer Boley (Cornel Wilde) an anthropologist, university lecturer, and general boring know it all, and his irritating daughter Diana (Jennifer Salt). A pre Sisters (1973) Salt does at least parade around in a series of revealing outfits which helps too offset her odiousness. I found Dr. Boley to be a fairly repulsive protagonist and the characters cause isn’t helped much by Wilde’s nauseatingly bland and disinterested performance. The writers do try to say something mildly interesting about the nature of publishing, after all Boley is an academic who cynically trades in myth and legend in order to make money. But his insulting sarcasm and mockery of Uncle Willie (Woody Chambliss) tells us all we need to know about this self-indulgent academic asshole. 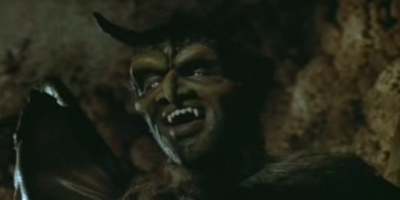 The sequence in Uncle Willie’s hut of curiosities is a case in point of the films failure to draw suspense or interest from promising material. The dialogue is stilted, and the acting wooden and artificial, but we are compensated by the fact that Uncle Willie possesses the skeleton of a felled gargoyle. The only problem for this trio of tits is that the freshly spawned gargoyle colony wants the remains back. The attack on Willie’s tin hut museum is a moment of success, especially with the sight of claws tearing through the corrugated metal roof. So naturally when faced with an ancient and powerful force of evil that wants the bones of its dead returned, Dr. Boley chooses to steal them! In fact so determined is he to get the skull of a gargoyle he leaves Uncle Willie to perish in a fire! In general the scenes in which the gargoyle’s strike are well mounted, a supplementary attack on the Mercer’s car for example is a highlight. But a very damaging error is made by making the creatures too visible. I can understand the filmmakers wanting to show off some of the costumes, but the cost is a total elimination of suspense and tension. Further damage is added by some idiot’s decision to slow the movements of the gargoyle’s down, the resulting scenes of these monsters fleeing in slow motion renders them laughable and harmless. 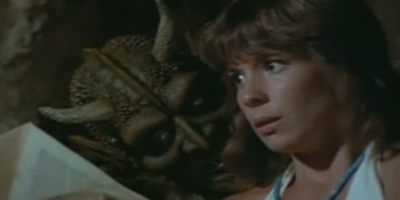 The introduction of a subplot involving a gang of bikers led by Scott Glenn seems like the completely pointless padding it so obviously is. But it does give the filmmakers an opportunity to stage a reasonably exciting chase sequence amongst the dusty scrubland. The final third sees the plot shift from its gargoyle attacks/episodic structure into a race against time to save Diana who has been abducted by the winged abominations. The caverns which house the gargoyles are a reasonably successful setting, but one which singularly lacks the labyrinthine nature the filmmakers wish us to believe is present. But the scenes in which the gargoyle leader studies and touches Diana are made intriguing by the inclusion of a jealous female. It gives further proof to the fact that these creatures think and act a lot like human beings. The incubation chamber makes for an interesting space, as do several scenes in which we see cute little baby gargoyles hatching from eggs. The finale is unforgivably rushed, and the ease with which the monsters are vanquished is equally inexcusable. However we do get to see the leader use his wings, with typically hilarious results! Gargoyles is yet another TV horror movie from the heyday of the 1970’s that has somehow attained a minor cult following. With the exception of Stan Winston’s contribution I’m mystified as to why this is.