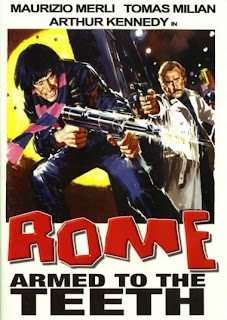 AKA:
Roma a mano armata
Assault with a Deadly Weapon
Brutal Justice
The Tough Ones


In recent months I’ve had the opportunity to scrutinise in more detail the long and varied career of Italian director Umberto Lenzi. My relationship with Lenzi’s films have been fraught and negative at the best of times, but I have to confess to finding myself mellowing towards his work with each passing obscurity that crosses my desk. After all Lenzi has directed over sixty films and only one of them was called Cannibal Ferox (1981). The prevailing consensus has it that Lenzi’s career can be divided into two distinct camps. In the first are his many contributions to the giallo and poliziotesschi cycles, which are fondly recalled, and generally considered half decent. In the second camp is everything else! From what I have seen so far that seems to be a fair assessment. But the overriding problem I have with Lenzi’s films still remains; namely that Lenzi himself is never the best thing about his films. His 1976 poliziotesschi flick Rome: Armed to the Teeth is a very good working example of this. Without a doubt the most distinctive aspect of this production is its cast. The film is led by Maurizio Merli (much maligned in some quarters, but I’ve always found him to be an appealing actor), who by this point was a veteran of the cycle, and could do the tough guy cop routine in his sleep. The supporting cast includes excellent turns from Tomas Milian, Arthur Kennedy, Ivan Rassimov, and Giampiero Albertini and these performances serve to offset Merli’s lack of dimension. The films second most distinctive feature is the superb musical contribution of Franco Micalizzi, and then maybe…and it’s a big maybe, we might put the direction of Lenzi third.

Rome: Armed to the Teeth is an extremely enjoyable and entertaining movie despite a major handicap. Its main weakness lies in a typically abysmal and nonsensically plotted screenplay by Dardano Sachetti. I have even less respect for Mr. Sachetti than I do for Mr. Lenzi; I consider him to be the architect of the some of the worst crimes against the written word in cinematic history. Sachetti has got away with it for far too long in my view. Here is one writer who has benefited tremendously from the attention placed on a director in the wake of the ‘auteur’ theory. I’ve lost count of the number of times that Lucio Fulci for example has got it in the neck for misogony or incompetent narratives, only to see the name Dardano Sachetti on the writing credits. Rome: Armed to the Teeth is almost totally devoid of plot, it’s episodic and contrived; it rambles along from one violent incident to another without any purpose. The basic structure of this film is set piece in arrangement; a violent or an all to frequently sickening crime, followed by Commissioner Tanzi’s (Maurizio Meril) sudden manufactured appearance, followed by a high octane car chase around the streets of Rome, followed by the apprehension/beating up of/ or murder of the culprits, followed by an interrogation depending on whether the criminal has survived Tanzi’s style of policing, followed by an early release for the criminal and Tanzi’s self righteous raging at the system. This would be fine were it not for the fact that this basic structure is repeated at least five times during the film. Running beneath this repetitive cyclical structure is a feud between Tanzi and the psychotic machine gun toting hunchback Vincenzo Moretto (Tomas Milian).

The Moretto/Tanzi feud is in fact the main event that propels the narrative forward, but due to bungled writing it comes across as a subplot. At times the film seems to forget about the fiendish hunchback, he drifts in and out of the narrative at odd intervals, and each time he is more unhinged and sicker than the last time. Milian is on typically exaggerated form as he eats bullets, hijacks ambulances, and machine guns into oblivion innocent bystanders. It has to be noted though that the reason for his vendetta against Tanzi is entirely due to the police brutality that Tanzi metes out at regular intervals. In their first encounter at the abattoir that employs the deformed sadist, Tanzi’s first act is to kick him between the legs, only then does he start to interrogate Moretto! Tanzi is a walking volcano, and the one thing certain to set him off, is to the see the thugs and criminals he has arrested, back on the street within hours. His methods of policing Rome are met by respect from his veteran colleague Commissioner Caputo (Giampiero Albertini), but met with fury and indignation from the media obsessed head of department played by Arthur Kennedy.

Tanzi’s brutality and rebelliousness are highlighted in an episode in which a gang of wealthy bourgeois kids relieve their boredom with a spot of rape, and in an episode featuring Ivan Rassimov as a loathsome playboy/drug pusher who gives a girl an overdose of heroin. The milieu that Lenzi and Sachetti create is totally disgusting and corrupt, women are either whores or victims, and the only women of any substance in the film Tanzi’s psychologist girlfriend Anna is soon left a shivering wreck who must flee the city to safer pastures. The screenplays failure to develop the opposing world views of Tanzi and Anna and to make it the site of an ideological struggle is a huge missed opportunity. But one that isn’t surprising in a film in which a man hefts a tree branch and suggests it is used as a dildo on a recent victim of gang rape! It is in brief moments like these that Lenzi’s films obviously become the trashy and less classy flipside of Fernando Di Leo, and in which Sachetti gets to indulge in his favoured images of violence against women. But somehow Rome: Armed at the Teeth emerges as equally, if not more, entertaining than any of Di Leo’s poliziotesschi pictures. Unfortunately Tanzi lacks humanity, and as such there is little to sympathise with here, instead one must almost entirely accept the vile nihilism of a repulsively corrupt Rome overflowing with human monstrosity.