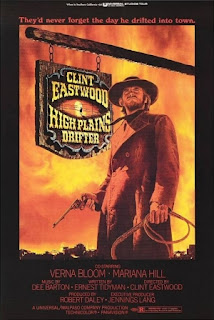 
In the baking heat of the Spanish countryside Clint Eastwood performed his duties as an actor in three spaghetti westerns that had little expectation attached to them; somehow amid the chaos of a Sergio Leone shoot Mr. Eastwood studied the Italian’s technique, absorbed the stylisations, admired the fiery filmmakers work ethic, and filed away the daily lessons he was exposed too for future reference. Eastwood was clearly determined to get more of out his three European vacations than just payment. It’s almost as if Eastwood knew that these formative experiences would be crucial in his later career. But Eastwood was not content with merely following the Sergio Leone curriculum of filmmaking, especially when the opportunity arose later in his career to work with Don Siegel. If Leone’s influence on Eastwood was visual and stylistic, then Siegel’s lay in the simplification of narrative; in a minimalist attitude to the presentation of familiar generic material. Eastwood’s first outing as a director was the atypical and unusual Play Misty for Me (1971); an intense psychological thriller in which Eastwood made his first attempt to subvert audience expectations built on his image as a tough guy action hero. His second film was High Plains Drifter, and it was his first western. It is a more instructive and intriguing film, and was his first clear opportunity to celebrate his influences and develop his own unique outlook.

High Plains Drifter has three key qualities that help to differentiate it from other westerns of the time. The first is the inspirational decision to situate the mining town of Lago on the shores of Lake Mono in California, and to use the stifling scrubland and arid desert landscape of the Sierra Nevada’s. The second was Eastwood’s decision, against the advice of Universal Pictures, to construct the town of Lago from scratch. The film is given an added sense of verisimlitude thanks to the timber framed three dimensional buildings, and this works in stark relief to the third important quality of the film; the incursion of the supernatural into the narrative. I won’t dwell too much on the supernatural qualities inherent to the film, because Ernest Tidyman’s screenplay purposefully maintains a sense of vague ambiguity. The important thing is the way in which an atmosphere of otherworldliness interacts with the dust, sweat, and dirt of the western genre, and helps to foster the revisionist qualities of the movie. A lot of writing on High Plains Drifter makes the error of suggesting that The Stranger (Clint Eastwood) is merely Leone’s ‘Man with No Name’ recycled and slightly re-interpreted. In my view the hazy indistinctness of The Stranger makes him an altogether more troublesome and problematic proposition. One thing that was made abundantly clear in the Leone movies was motivation; here we are left guessing until the end, and even then the film isn’t totally clear. The Stranger completely lacks the sardonic twinkle of ‘The Man with No Name’, he lacks the emotional core; in short The Stranger is almost a complete psychopath. 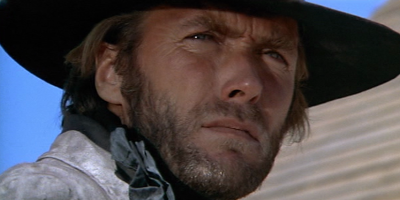 Our first indication of his supernatural skill comes in a barber shop, where he effortlessly eliminates three salty looking dudes. This is a brilliant scene made even more impressive by Eastwood’s decision to use mirrors. But the following scene undermines his uncanny skills with a pistol; he indulges in a base act of rape. If it is The Stranger’s intention to punish the townspeople he miscalculates here; the victim of the violation clearly loves every second of it. It isn’t long before The Stranger has been hired as a gunfighter to defend the town against three men wronged by the Lago Mining Company. The company itself is riddled with corruption and pettiness; the mean avariciousness has bled down into the very fabric of the town, into the very timber of the buildings…what the town needs is a lick of paint! A crack of a whip, a fractured dream in which a man is brutally bullwhipped to death while the townsfolk watch on, all recurrent images which offer hints and clues as to the purpose of this gun toting demon. It gives the film a supreme sense of gothic paranoia which is taken to a symbolic extreme with the decision to paint the town red and rename it hell. 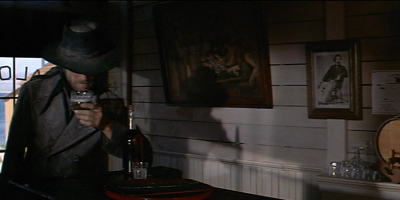 Some might argue that the symbolism employed is a little heavy handed, but there is a wonderfully simplistic and naïve nature to High Plains Drifter that makes it seem entirely appropriate. It works extremely well with Eastwood’s style of direction, which even here in its infancy, is as unobtrusive as to be barely noticeable. One weakness perhaps is the elaborate nature of the citizen’s punishment. The film spends half its running time hitting guilty characters where it hurts, only to have them slaughtered in a swift climax. But without it the film would lack the dark irony at its heart. The screenplay succeeds admirably in setting out a town’s guilty conscious. I did think the length and multitude of the flashbacks was unnecessary, but each one either implicates a different character, or in the case of Mordecai (Billy Curtis) exonerates one. The revisionism of High Plains Drifter lies in it attitude to the morality of the western. This is a strong attack on traditional conceptions of heroism, and not a single character emerges with even the slightest degree of nobility. The film is a both a subversion of traditional western values and a subversion of expectations and generic convention. It’s an extremely ambitious undertaking for a second film; first and foremost Eastwood celebrates his influences, he’s only too happy to credit the men that helped form his filmmaking vision. But the true lasting appeal of High Plains Drifter lies in its ingenious melding of the supernatural, gothic melodramatics, the horror mystery, and the revisionist impulse that united the western genre in the 1970’s.
© Shaun Anderson 2012
Posted by Shaun Anderson [The Celluloid Highway] at 22:06