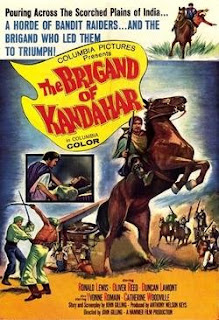 
British director John Gilling holds a curious position within the history of Hammer Film Productions. He was the main creative force behind two of their most successful and fondly remembered titles; The Plague of the Zombies (1966) and The Reptile (1966). Yet the other films he made for the company have become outright obscurities. It is only in the last couple of months that two of his films - The Scarlet Blade (1964) , and The Brigand of Kandahar - made their debut on DVD; whilst The Shadow of the Cat (1961) still awaits a legitimate DVD release. Even his single entry into the ongoing saga of Egypt’s favourite mummified corpse The Mummy’s Shroud (1967) is largely overlooked and ignored despite being very entertaining. When one compares Gilling to other directors Hammer regularly employed such as Terence Fisher, Freddie Francis, or Val Guest, his marginalisation becomes more apparent. Of course an obvious answer for the relative disappearance of these films might be that they’re dreadfully incompetent. Unfortunately The Brigand of Kandahar does little to dispel that reading. 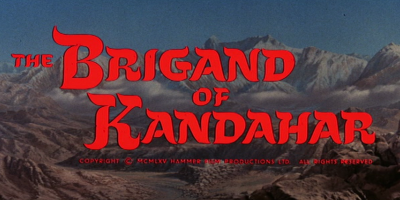 ﻿
Despite its multitude of shortcomings which I shall discuss later the one thing this movie does possess is a sense of thematic unity with other Gilling productions. The Plague of the Zombies, The Reptile, The Mummy’s Shroud, and Kandahar all share an interest in the question of colonialism. In the main it is merely a backdrop, but on occasion such as in Plague or The Reptile it is used symbolically and allegorically; sadly Kandahar is little more than a “Boys Own’ adventure with lots of face painted English actors running around embarrassingly artificial sets that are supposed to represent the exotic climes of India’s northwest frontier. The screenplay by Gilling sets up an intriguing proposition as it establishes the pressures and tensions faced by the British soldiers at the border fort of Kandahar. The fort itself becomes a microcosm of the prejudices and racism at the heart of the military establishment through the case study of Lt. Case (Ronald Lewis). Case is a half caste who is determined to achieve success in the military hierarchy in spite of his racial difference, but he hasn’t bargained on the ignorance, hostility, and suspicion of his superiors; especially the hard nosed Col. Drewe (Duncan Lamont). He is soon faced with trumped up charges of cowardice, is consigned to a hefty prison sentence, and has no option but to flee Kandahar; that he does so into the open arms of the enemy in the shape of Ali Kahn (Oliver Reed) confirms to the British that he was a brigand after all. 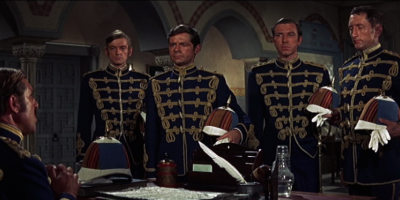 ﻿
There are some complex issues put forward by Gilling’s screenplay, but they are completely undermined by two things. The first being how thinly sketched and archetypal the characters are, the second how unconvincing the performances are. A blacked up Ronald Lewis struggles to bring any kind of emotional range to Lt. Case, despite the fact that he has potentially intriguing material to work with. The character for example decides to fight the evil of Col. Drewe by drawing upon the evil of Ali Kahn. But Lewis is unable to communicate the characters sense of internal struggle or cultural upheaval; the speed with which he shifts from loyal soldier to bandit fails to convince. The film never really recovers from the miscasting of Ronald Lewis. The casting of his adversary however is spot on. Duncan Lamont is excellent as Col. Drewe, and he arguably puts in his best shift for Hammer. It’s just a shame that it was in such an inconsistent and insipid production. His conception of the character is delightful as he effortlessly embodies both the nobility and the hypocrisy of the higher ranks. The dark and brooding intensity of Oliver Reed is nowhere in sight as he totally indulges in over-the-top theatrics. The fact that Ali Kahn is described as slightly mad is all the invitation Reed requires to overact; the result is the character becomes little more than a sadistic clown. 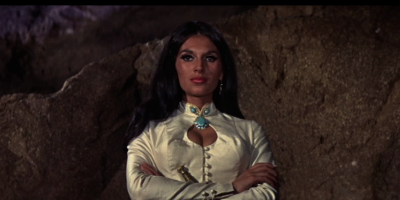 The usually outstanding production design of Bernard Robinson is so poor here that it seriously undermines the picture. The film was actually shot at Elstree Studios which perhaps accounts for the flat blandness of the sets; for some reason Bray Studios always possessed warmth that Hammer struggled to replicate elsewhere. In addition to plastic rocks, and the countryside of Hertfordshire doubling for India, there is some very clumsily inserted battle footage, and some laughably poor side projection shots. Even the music of Don Banks gets in on the act, with the British forces given a comical fanfare, which confirms, should confirmation be required at this stage, of the films anti-militarist principles. The only two aspects of the film that make it worth viewing are Duncan Lamont’s performance and Yvonne Romain who is rather fetching as Kahn’s sadistic sister Ratina. It comes as no surprise really to discover that The Brigand of Kandahar was the final film in Hammer’s contract with Columbia Pictures. The whole production has a slip-shod feel, with cost-cutting at every corner utilised to save on a budget that must have been slight to begin with. On the evidence of this Columbia must have been grateful that their relationship with Hammer was at an end.
© Shaun Anderson 2012
Posted by Shaun Anderson [The Celluloid Highway] at 18:33