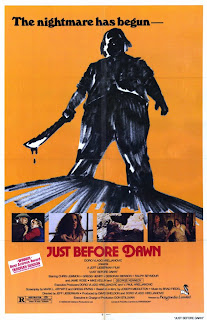 
Just Before Dawn is a solid, and on occasion, very effective backwoods rural slasher film in the mould of John Boorman’s Deliverance (1972). Brooklyn born writer/director Jeff Lieberman came into it off the back of Squirm (1976) and Blue Sunshine (1978). The former was a worm infested ‘Revolt of Nature’ flick which showed evidence of an eccentric and off kilter sense of humour, and an intelligent use of space and landscape. The latter, arguably Lieberman’s finest film, proposed a novel outcome for counter-cultural experimentation with mind expanding narcotics; in this case baldness followed by an unsociable tendency for mass murder! But what really made Blue Sunshine effective was the decision to delay the effects by ten years, thus allowing Lieberman to explore the hypocrisies of individuals now desperate to be a part of the establishment. Just Before Dawn is probably Lieberman’s most derivative film, and the director himself is happy to admit his influences, but that doesn’t mean it is any less important than his previous efforts. From Squirm Lieberman learnt the importance of setting and location, and one of Just Before Dawn’s most important features is the evocative use of Silver Falls State Park in Oregon as the principal location. From Blue Sunshine he learnt how to create plausible characters which developed in a believable and credible way, and Just Before Dawn is infused with a rare interest in characterisation that helps to make it one of the better slasher films to emerge in the wake of Halloween (1978). 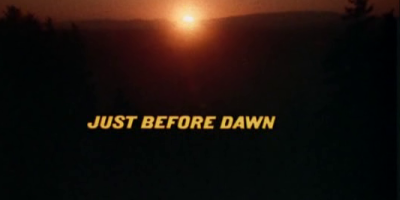 Although Just Before Dawn speaks of the differences between modern city folk and the rural mountain dwellers it isn’t the be all and end all of the plot. In this way it differs from Deliverance, even if an early shot of a pair of grubby twins playing in the rusting wreck of a car could have been lifted from Boorman’s film. The first thing it needs too establish is its credentials as a slasher film and it does so with an excellent opening sequence in an overgrown and abandoned church. The use of camera and editing in this sequence is exemplary, especially when one of the hunting party looks up at a hole in the roof and sees an unwelcome face glaring down at him. It’s a face only a mother could love, and one that has possession of a rather large machete. But like the majority of early 1980’s slasher films a disturbing sense of unease and disquiet is almost single-handedly created by the music. The composer was Brad Fiedel who punctuates his plaintive keyboard theme with eerie sounds and ethereal whistles; in addition to creating a ghostly and unnatural atmosphere the music also serves to emphasise the seclusion of the mountainous woodlands. Fiedel would go on to score a number of genre favourites including The Terminator (1984), Fright Night (1985), and The Serpent and the Rainbow (1989) thus confirming the promise showed here. 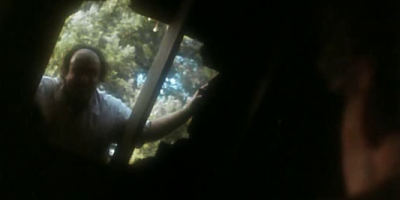 The city folk are represented by the ubiquitous practical joker Jonathan (Chris Lemmon), who slips into cliché when he drops litter and cracks jokes about inbreeding; the veteran climber Warren (Gregg Henry) who has inherited the stretch of land in the mountains they are camping in; the studious and sexually frustrated photographer Daniel (Ralph Seymour); the sexually precocious Merry Cat (Katie Powell) and the surprisingly resourceful Connie (Deborah Benson), who knows how to pitch a tent and possesses basic survival skills. With the exception of Daniel and Merry Cat the characters are sharply drawn. The trajectories of Warren and Connie for example are very interesting, and Jonathan’s long drawn out torment at the hands of the mysterious assailant illustrates the seriousness beneath the façade of stupidity. All the youngsters are competently written and are a surprisingly sympathetic bunch; I didn’t spend the entire film hoping for the death of characters that the writers intend to irritate. The abandoned church makes a most welcome return later in the film in another standout sequence. The camera uses the poor vision of Daniel to create mounting tension, his point-of-view shot a mere blur as a figure strolls determinedly closer. This sequence also reveals a major plot twist, but one that can be telegraphed through a series of hints early on. 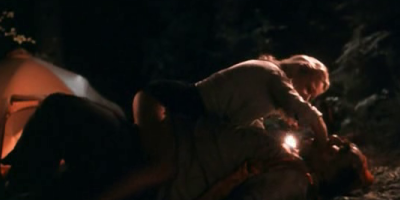 The presence of the ever dependable George Kennedy as forest ranger Roy McLean is a welcome addition, even if his appearances are brief and sporadic. His subplot doesn’t feel like the padding it so clearly is, mostly because of Kennedy’s charisma. As the narrative develops it becomes clear that the plot is coalescing around the strong feminine authority of Connie. However she is far from a conventional ’Final Girl’ due in no small part to her reliance on Warren and his position as the most experienced member of the party. But when faced with the grotesque obesity of a retarded inbred mountain man he turns into a blubbering wreck. His act of surprise cowardice is one the most innovative aspects of the screenplay, and it leads to an astonishingly physical confrontation between the slight Connie and the flabby psychopath. For these very small reasons Just Before Dawn manages to transcend the limitations of its very low budget, and its occasional moments of amateurishness. In the highly imitative landscape of the slasher film such little tweaks of convention are enough to separate it from the pack.
© Shaun Anderson 2012
Posted by Shaun Anderson [The Celluloid Highway] at 22:05