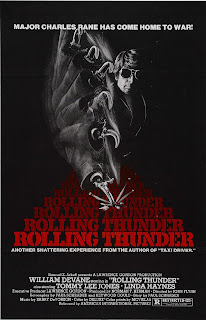 
With the recent blu-ray release of Rolling Thunder courtesy of Studio Canal I thought it was high time I reacquainted myself with Major Charles Rane and his hook-handed vigilantism in the bordellos and bars of Mexico. For the last ten to fifteen years the film has been languishing in the sulphur pits of distribution hell, and in that time it has steadily built itself a cult reputation. This is in no small part due to Quentin Tarantino and his gushing masturbatory praise for the film. The fact that Tarantino is a big fan is just one indication of the films simplistic juvenilia. The second is a screenplay by Paul Schrader which completely recycles the themes and preoccupations of his earlier effort Taxi Driver (1976), but chooses to omit questions of social and political fragmentation in favour of a highly personalised odyssey of violence and revenge. Although both films share a number of themes and plot points (for example both films conclude with a blood drenched finale in a whorehouse) Taxi Driver possesses an awareness and intelligence that is entirely lacking in Rolling Thunder. If the two films were relatives then Rolling Thunder would be the immature and irritating younger brother. The film has the feel of a quick exercise for Mr. Schrader, certain aspects feel underdeveloped, and certain aspects just make no sense at all. For example why on earth would a quartet of hard nosed bastards torture Charles Rane, and then shoot his wife and kid before his very eyes, all for a lousy $2,000? It all seems a little over the top and unnecessary; the plot hinges on a number of absurd contrivances, the most ridiculous of which sees Rane end up with a hook instead of a hand! 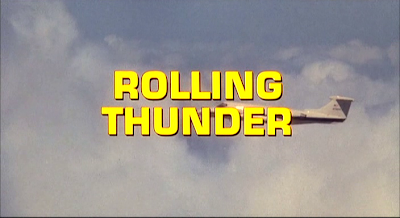 It’s very unusual for me to say this about a vigilante/revenge narrative, but the weakest part of Rolling Thunder is the second half in which Rane hunts down his assailants. Until the action shifts to Mexico the film is a very effective examination of the way in which Rane (William Devane) attempts to readjust to civilian life. His monochrome dreams are constantly haunted by the memories of his imprisonment, his mind and body struggle to understand his new found sense of liberty, and behavioural patterns so ingrained after years of hardship and brutality rebel against his desire for a sense of normality. Rane will soon be fighting a war on two fronts; a physical war against the thugs who rob him of his family and his hand, and a psychological war in which his state of mental anguish does battle with the tedium of  modernity. However some spice is provided by the fact that his wife has had an affair in his absence and his set to remarry, but like everything else Rane accepts this news with a cold hard stare. William Devane does rather a lot of this; in some quarters Devane’s performance is hailed as exemplary, but my question is what performance? Devane shows off a repertoire of two expressions; grim faced, and even grimmer faced. The man could certainly win a staring competition, but awards for acting? On the evidence of this, not very likely. 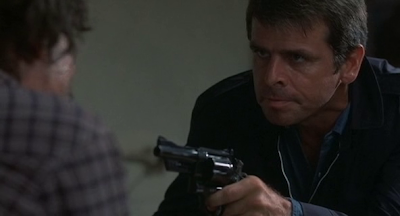 However what Devane does do very well is communicate to the audience that Rane is a walking volcano, just waiting to explode; some of the most memorable and awkward scenes in Rolling Thunder follow Rane as he is forced to attend civic meetings and accept well meaning gifts from the townspeople. These gifts include the $2,000 worth of silver dollars that cause all the problems later, and a red Cadillac, made all the more striking as it kicks up the dust in the borderlands. They are tense moments because the screenplay has coiled the spring and the audience is not sure until later how it will unwind. That it unwinds within the predictable and clichéd territory of the vigilante/revenge flick has to rate as a major disappointment. The film soon heads into the rampant machismo of the western as Rane is forced to cross the border to mete out his own personal brand of justice. The moment he does this the good work of the first half is pretty much undone and we are into routine shoot-em-up territory, the like of which was ten-a-penny in the Grindhouse’s and drive-in’s of the 1970’s. It is worth noting the contribution of  Tommy Lee Jones who offers strong support as another disenfranchised and alienated soldier. He has the best moment in the film when Rane comes to his house, and tells him he has located the evildoers that wronged him;  with a smile he simply says “I’ll just get my gear”. It’s a smile of relief, the two men have renewed purpose, they are empty and hollow shells without the promise of violence. 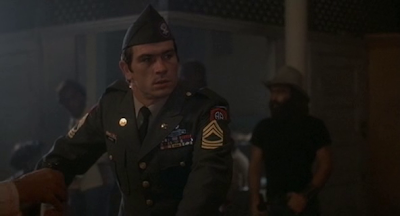 A subplot involving Rane’s relationship with Linda (Linda Haynes) doesn’t really go anywhere, apart from to indicate that it’s possible to be alienated and alone without having suffered the traumas of war. The final shootout in a Mexican whorehouse doesn’t work anywhere near as well as Travis Bickle’s one man bloodbath at the conclusion of Taxi Driver, and this is largely due to indistinctive and uninspired direction from John Flynn. The first half of Rolling Thunder works incredibly well as an intense character study and really gets to grips with the problems Rane faces in society; but the descent into the murky world of stereotype and racism in the second half is damaging to the film. The Mexican people we encounter are never anything other than sleazy and vile, and the locations serve to emphasise the murky and disgusting cesspool that Rane must wade through in order to exact his revenge. The film lacks an emotional core; even when Rane his having his hand destroyed in the waste disposal chute we don’t feel any sympathy for him. Rolling Thunder is an empty and heartless exercise, but it operates on a base level that means it is extremely enjoyable to watch; vigilante films are always very entertaining and I like them, but I like them against my better judgement.
© Shaun Anderson 2012
Posted by Shaun Anderson [The Celluloid Highway] at 19:08