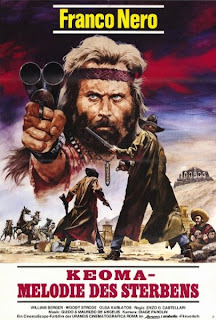 
By the late 1970’s the landscape of the Euro-Western was limp and lifeless, the generic terrain parched and infertile. The occasional production little more than tumbleweed in a dusty and decaying town. The Spaghetti Western Database lists a paltry eight productions for 1976 and it would be fair to say that Enzo G. Castellari’s entry Keoma stands head and shoulders above the rest. Some argue that Keoma was not only the last important spaghetti western, but also one of the best ever made. Whilst I find the former possesses a nugget of truth, the latter is a lot harder to substantiate. However one fact that is undeniable is that out of the eight westerns that Castellari directed, Keoma is probably the most accomplished. I’ve argued elsewhere that although Castellari worked in a multitude of genres, his films, structurally at least, adhered very closely to the conventions of the western. So it’s something of a surprise to discover that until Keoma, he hadn’t directed a truly important or genre defining example. One of the major ingredients lacking in previous Castellari westerns is the sort of barnstorming and forceful performance that Franco Nero puts in as the beleaguered half-breed Keoma. With his wild and unkempt beard, penetrating blue eyes and long hair (actually a wig) Nero makes an indelible impression the likes of which audiences hadn’t enjoyed since Django (1966). Nero has his critics, but you won’t hear any negativity from me. Nero is at his charismatic best here and so dominates proceedings that the films director becomes totally overshadowed.

Few spaghetti westerns cultivate the sense of apocalyptic doom that runs throughout Keoma. It’s almost as though the writers (Castellari, Nicco Ducci, and George Eastman) had a remit to make the western to end all westerns. In retrospect it’s a great shame that Keoma wasn’t the final film in the cycle, because I can’t think of a more fitting conclusion. The civil war forms the backdrop of the narrative; a devastating and overwhelming event that haunts the landscape, and has led to such social fragmentation that a town decimated by plague can be run by a gang of leering racist ex-confederates. Keoma is rootless and itinerant, a man desperately needing to find himself, or at the very least perform a duty that will give his life meaning amid the chaos. In the shape of the heavily pregnant Lisa (Olga Karlatos) Keoma finds his calling. Both Lisa and Keoma are outsiders - the former has been tarred with the brush of disease, and the latter has had to endure the prevailing prejudices of the day. Their status as outcasts is important, because Keoma is a force of vengeance, and he immediately allies himself with the plight of the stricken townspeople who struggle for freedom under the dictatorial heel of Caldwell (Donald O’Brien) and his band of vile cutthroats.

The screenplay efficiently develops a set of themes common to the spaghetti western cycle; oppression, inequality, tyranny, and the fight for freedom. The film is on the side of the repressed minorities - Keoma the half-breed, and George (Woody Strode) the once dignified and proud caretaker of the Shannon family, now reduced to poverty and drunkenness because of the colour of his skin, and William Shannon (William Berger) the patriarch who is no longer of use because of his advanced years. The films principles are leftist, but any major political statement or allegorical dimension are subsumed within the highly personal family dynamic of the Shannon’s. The screenplay very adroitly concocts a very small and private tale of sibling rivalry, jealousy, and bullying within the broader canvas of the narrative. It is the relationship between the Shannon’s legitimate sons Sam (Joshua Sinclair), Butch (Orso Maria Guerrini), and Lenny (Antonio Marsina) and their half brother Keoma that forms the true heart of the film. The background to the seething hatred and resentment between the four is provided by a series of astonishingly well crafted flashbacks. The relationship between father and son and the question of legitimacy is one that seems to run through a number of Franco Nero westerns - similar themes can be found in Massacre Time (1966) and Texas Adios (1966) to name but two. Perhaps this is what attracted Nero to the project.

Stylistically at least the most telling influence on Castellari is Sam Peckinpah. Keoma overflows with slow motion shootouts, fistfights, and the by now requisite scenes of grisly sadism. But the elliptical editing patterns, especially those preceding the flashback sequences, are peculiar to this film. There are two other things worth mentioning that are also peculiar to Keoma. The first is a very bizarre mystical and supernatural undertone. On every leg of Keoma’s journey a mysterious woman dogs his movements, her appearances coinciding with violent death. The symbolism of this hag amid an atmosphere of plague and destruction is obvious, and her reaction to being left with Lisa’s newborn child at the films conclusion is telling - like Keoma she is better equipped to deal with death. The second peculiarity (and that’s putting it mildly) is the soundtrack. The music was composed by the dependable De Angelis brothers, and is in the main very good. But the decision to have a repetitive song narrate the action is a disastrous misstep. Not only does it state what is patently obvious (thus insulting the audience) but the vocals are delivered in a fashion which can only be described as abominable. But this isn’t an uncommon reaction. I haven’t met or spoken to anyone who has a good thing to say about the Keoma soundtrack. If its possible to put this to one side (a major challenge because the songs are so damn intrusive) then Keoma emerges as a highly distinctive, beautifully constructed, and wonderfully entertaining western.