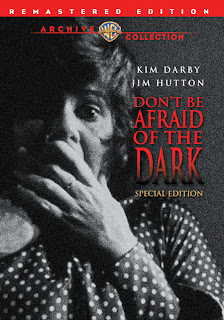 
Don’t Be Afraid of the Dark is a humble ABC movie-of-the-week that was first televised on the 10th October 1973. Almost forty years on Guillermo Del Toro is still so impressed by this spine chilling 74 minute TV movie that he produced a remake. I’ve opted to do the sensible and intelligent thing; I’ve totally avoided the pointless remake, and instead watched the original again. To be fair to Mr. Del Toro remaking Don’t Be Afraid of the Dark makes a lot more sense than many of the other films that have been remade in recent years. Although it has cultivated a cult following over the years the original has been a particularly elusive item; its reputation being fed by the nostalgic memories of a generation traumatised by the diminutive demons that emerge from a bricked up fireplace. To coincide with the release of the remake Warner’s put the original out on DVD as part of its Archive Collection; excellent news for the America market, but disappointing for everyone else. Hopefully one day Warner’s will extend this fine service beyond the borders of America. Nevertheless there are still a myriad of ways to view this piece if you know where to look. One thing that The Celluloid Highway totally eschews is allowing nostalgia to colour an appraisal of a film. I find it an entirely unhelpful avenue, and one that defeats the object of criticism; so the question is without the rose tinted spectacles of childhood does Don’t Be Afraid of the Dark stand up to an objective critical scrutiny? 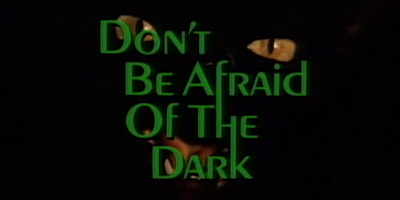 Whatever way you look at it Don’t Be Afraid of the Dark is quite an impressive achievement. The film was apparently completed (from script approval to post-production) in just two weeks! That the filmmakers manage to imbue the slight premise with such a creepy ambience is a testament to their ingenuity. This is another case of the restricted limitations of a low budget, and the limitations of network television, being used as an advantage rather than as an excuse. The film opens amid howling winds, with leaves blowing in the cool autumnal climate, and a long establishing shot of a wonderfully gothic two-story Victorian mansion. The shot length indicates the importance that the house will play in the unfolding events. But then something unexpected occurs; an eerie sickly green glow begins to emanate from a basement window, and the sound effects are replaced by the fevered inhuman voices of creatures indelibly linked to the diseased green light. Unfortunately one is able to pick out enough words in the babble, and the dialogue serves to actually give away the entire film! It’s a pretty clumsy piece of writing from Nigel McKeand. Although we are not yet privy to the identity of the voices, their intentions are provided to us. Within five minutes the only thing we have to look forward too is finding out who or what they are, and how they plan to go about their business. 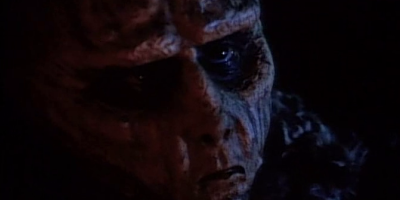 Fortunately these revelations are presented in a way that still manages to pack a punch. It seems to me that most of these 1970’s TV horror movies have an inbuilt soap opera element. There is always a dull and distracting subplot and in this case it revolves around questions of upward mobility, the lonely wasteland of domesticity, and career obsession. Sally Farnham (Kim Darby) is the young woman who has sacrificed the perceived liberties embodied by the prevailing feminist theory of the day for a life of financial security and social progression. The downside to this is that she begins to feel a sense of alienation and loneliness. Her husband Alex (Jim Hutton) seems almost completely oblivious to this, so concerned is he with securing a promotion within the firm of accountants he works for. Sally is surrounded by well meaning but very controlling men. This might explain why she ignores the cliché ridden advice of Mr. Harris (William Demarest) and decides to open up the sealed fireplace in the dark basement study. This is one of the few occasions in the film that Sally goes against the grain of patriarchal advice and she is severely punished for it. Sally is desperate to feel needed and wanted, and not to feel like a social cog in her husband’s career ambitions. The irony of course is that the demons she unleashes desperately need and want her. 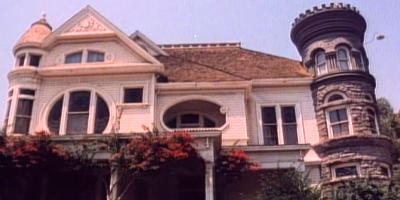 The filmmakers do an excellent job of creating a concealed underworld within the house. The creatures constantly spring up from unexpected sources, and have access to a network of secret doors and panels, the result of which gives them a frightening omniscience. This reaches a moment of terrifying intensity when Sally takes a shower. The most effective moment though comes during a dinner party, when Sally peers beneath a tablecloth to be greeted by a visage of sheer malevolence. This is the first time we see the face of one of the creatures and it’s an excellent shock sequence. The default position of Jim is that his wife is going insane, and it eventually takes her friend Joan (Barbara Anderson) to convince him, illustrating what little faith he has in his wife. The swiftness with which Joan believes Sally doesn’t ring true, but by this point the film is rushing towards an incredibly downbeat conclusion. Another character that doesn’t ring true is Mr. Harris, who in one scene actually communicates with, and is attacked by, the creatures, but yet is comfortable to sit back and allow Sally to endure nights of terror, without a word of assistance. It seems as though her ignoring his advice was a personal affront, and he’s content to let her suffer. The myriad weaknesses and limitations of Don’t Be Afraid of the Dark would seem to have been forced on it (the effects, the poor performances etc) but it manages to survive these detractions because of a total commitment to an atmosphere of dread and menace.