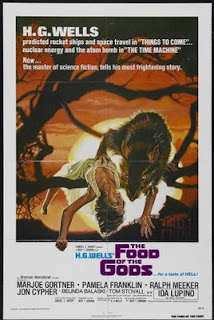 
Writer/director/producer/visual effects designer Bert I Gordon is living proof that one can be a jack of all trades and master of none. Despite Gordon’s obvious shortcomings there is a certain infectious enthusiasm to many of his films - especially his science-fiction efforts of the 1950’s. How can one not enjoy the absurd prospect of giant grasshoppers in the ludicrous Beginning of the End (1957), the odd poignancy of The Amazing Colossal Man (1957) and the expectation of poorly realised mutant spiders in Earth vs. the Spider (1958)? As with many science-fiction films of the 1950’s the best thing about Gordon’s films were the titles. Nevertheless he managed to deliver distraction and entertainment, that is until Village of the Giants (1965) when his brand of gigantism (he also did a little people film - the awful Attack of the Puppet People [1958]) reached an apex of stupidity and boredom. Against the run of technology Gordon persisted with his visual effects, and more importantly persisted with the themes inherent in the subject of mutation. His science-fiction/horror efforts forming an interesting self-contained universe that might respond well to the auteur theory. In the late 1970’s he returned to his favoured landscape with The Food of the Gods (1976) and Empire of the Ants (1977), two films which took advantage of the ‘Revolt of Nature’ impulse that had been re-popularised in the wake of Jaws (1975). 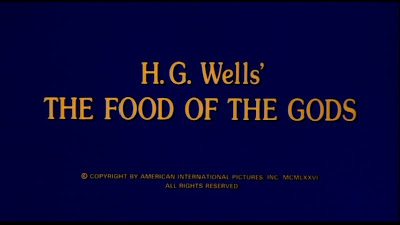 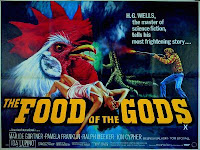 Unfortunately one of the major problems of The Food of the Gods is that the visual effects are largely produced with techniques Gordon was using in the 1950’s. The chief visual effect here is simply the repetition of oversized reproductions. A film like this lives and dies by the realisation of its spectacle - simply put the laughable effects do a great deal of damage to any serious point Gordon’s screenplay is attempting to communicate. The film was based on a minor aspect of the H. G. Wells novel The Food of the Gods and How it Came to Earth which was first published in 1904. Naturally Wells’ scientific romance had lofty and allegoric ambitions, in this case to push forward a socialist agenda that can be mapped out in most of his literary work. Gordon naturally opted for the sensationalist elements of the novel, but curiously his film is totally devoid of the ecological sting common to 1970’s ‘Revolt of Nature’ pictures. The substance that creates gigantism is puked up by the Earth itself. This is not a case of mankind misusing technology or mistreating nature. ‘The Food of the Gods’ is a seemingly natural secretion which a select number of human beings react to. Mr and Mrs Skinner can be forgiven for mixing the material in with their feed, because ultimately they have no knowledge of its effect. Their actions are certainly reckless for it might well have been poisonous to their chickens. But this must surely be one of the few ‘Revolt of Nature’ films in which the natural world truly is the villain. 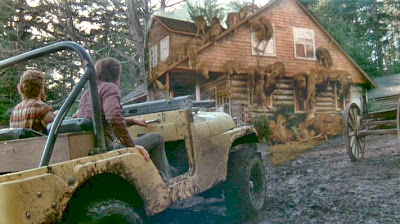 Of course we do get the obligatory caricature of capitalist greed in the shape of Bensington (Ralph Meeker), but thank god Meeker is on hand to provide the only interesting performance in a wasteland of bad acting. Our hero Morgan (Marjoe Gortner) is blandness personified (except when he’s killing things) but he handles the demanding action sequences efficiently. These include an attack by giant wasps (transparent ones at that!) and an encounter with an oversized chicken that has to be seen to be believed. Despite these events Morgan and his colleague return to the island setting after an utterly pointless return to the mainland. The location was Bowen Island in British Columbia, Canada and the photography by Reginald Morris of the wooded landscape is probably the highlight of the film. To be fair some moments in The Food of the Gods work quite well. The giant worms that attack Ida Lupino in her farmhouse kitchen are particularly effective. The surprisingly gory close up shots of giant rodents devouring their pray are made more impressive by the judicious use of mechanised heads. But in general these moments are exceptions rather than the norm. 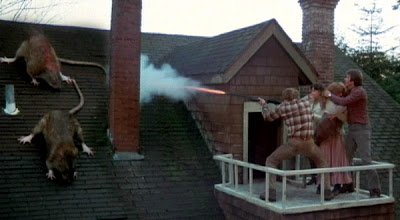 At times the incompetence and stupidity of the film is baffling. Why include voice over narration from the lead character? He bookends the film with two statements, the first of which promptly gives the entire film a way! Was Gordon unsure that his audience would understand the complexities of his movie? What on earth is a dam doing on an isolated island surrounded by water? Why do the rats suddenly forget to swim just because of their increased weight? Where on earth does that convenient second story balcony come from on the Skinner’s farmhouse? And what is the point of the subplot involving a pregnant couple? This is in addition to the profligate lapses in plot and continuity. Furthermore The Food of the Gods leaves a sour taste in the mouth of anyone who wishes to bleat about animal rights. This film might have worked as a nostalgic throwback to Gordon’s efforts of yesteryear, but it is just too mean and unsavoury to work. The prevailing consensus on this film is that it’s a celluloid disaster, I saw nothing in its 90 minute running time to challenge that viewpoint.
© Shaun Anderson 2011
Posted by Shaun Anderson [The Celluloid Highway] at 17:25