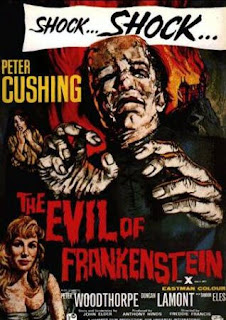 
The Evil of Frankenstein is the third instalment in Hammer’s tremendously successful reinterpretation of the Mary Shelley novel. The previous two films The Curse of Frankenstein (1957) and Revenge of Frankenstein (1958) delighted audiences and shocked stuffy critics with their baroque settings, violence, colour, and the unnervingly mannered and icy central performance from the brilliant Peter Cushing. These two films were both directed by Terence Fisher and maintained a sense of continuity thematically and visually. Fisher’s direction in these films is striking without being obvious a lesson that Freddie Francis should have took note of. By 1964 Fisher however was out of favour with Hammer. The reason for this is unclear but the lukewarm reception of The Phantom of the Opera (1964) is thought to have had something to do with it. In his stead was a man who would become a regular at rivals Amicus, the noted cinematographer Freddie Francis. This wasn’t his first foray for Hammer having previously directed the undistinguished Psycho (1960) inspired thrillers Paranoiac (1963) and Nightmare (1964). The results of allowing Francis his opportunity to work on the Frankenstein series are largely unsatisfying and lacklustre and mark an unfortunate break in the continuity set up in the first two films. 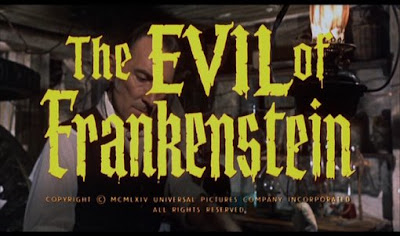 There is quite a difference between Freddie Francis the DOP and Francis the director. It is a paradox of his career that he was able to excel himself visually in the films of others and produce such indifferent results in his own films. The low budgets didn’t help of course, nor the interference of know it all producers. The only horror film he made that can compare to the visual brilliance of The Innocents (1961), The Elephant Man (1980) and The Straight Story (1999) is the Amicus production The Skull (1965). He had a very low budget then, so really there is no excuse for the flat, drab, unadventurous and unattractive horror films he made. Perhaps it was a case of contempt for the genre, or perhaps ineptitude? The Evil of Frankenstein does suffer from this drabness and paucity of visual enjoyment, but it is also a failure at a narrative level. A pointless flashback sequence which questions the continuity and thus the veracity of the first two films is one such blunder. A blunder on this occasion that can be attributed to the screenwriter Anthony Hinds. The film isn’t a total aesthetic failure though. The Baron’s laboratory in the flashback is the most impressive seen in the cycle, but this is mere decoration that fails to cover up for the stupidity of the sequence in the first place. 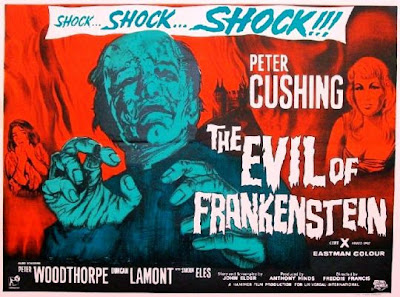 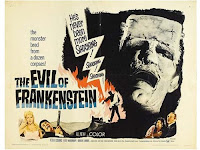 Any film featuring Peter Cushing has some redeeming qualities, but even the ever dependable Cushing struggles with the liberties taken with the Frankenstein character. He comes across as a petty crybaby, his quest this time merely a childish vendetta against those that destroyed his work and drove him into exile. On this occasion the Baron seems as much if not more concerned with the theft of his possessions than he does with discovering the secret of life. His relationship with the hedonistic hypnotist Zoltan is an interesting angle that remains unfulfilled. The make up for the creature isn’t a patch on The Curse of Frankenstein, but its not a disaster. It affords the film a very striking moment when we see the Creature entombed in a glacier (a plot development that is however utterly ludicrous). The inclusion of a feral deaf mute girl intended to function as a double for the Creature is also another half baked avenue. All these elements could have provided the film with interesting themes, but when left to limply hang as they do, they function more as pointless baggage. Even the usually reliable set design and art direction feels dated and tired adding little to the proceedings. In 1967 Terence Fisher would return to helm the fourth film in the series Frankenstein Created Woman, a far more successful and rewarding venture all round and The Evil of Frankenstein would begin its slow drift into the semi-obscurity it deserved. However its status as an ill conceived aberration makes it worth viewing.
The Celluloid Highway's 50th Film Review.﻿
﻿© Shaun Anderson 2010
Posted by Shaun Anderson [The Celluloid Highway] at 16:33