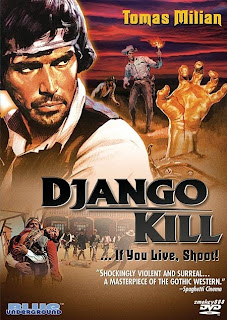 
This is a very unconventional and bizarre spaghetti western that has scant resemblance to Sergio Corbucci’s Django (1966), the film series it was promoted as being part of. This is a complete stand alone western, and although both films share a certain amount of cynicism and pessimism Django Kill’s bitter vision of an irredeemable hell on earth (with the requisite Grand Guignol imagery to support that vision) is something unique to Italian westerns. The sort of bleakness explored in Django Kill would become something of a mainstay in westerns throughout the 1970’s (see Eastwood’s High Plains Drifter (1972)), but for 1966 it was incredibly daring and audacious, and few, if any films, in the genre have achieved such a dislocated and alienated atmosphere. Writer/director Giulio Questi was never happy with the title (and no doubt even less happy about the scissor happy butchery the film endured at the hands of various censors) preferring simply If You Live…Shoot! which is a far more accurate representation for the trigger happy events of the film. However its fair to say that without the prefix of the Django series this might have, along with a hundred other spaghetti westerns, disappeared into obscurity. 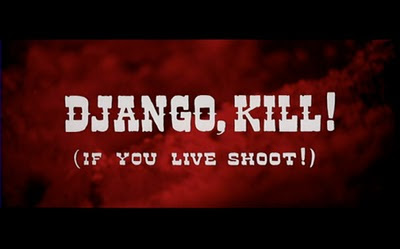 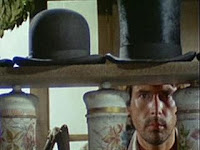 The film opens with the distinctive and unsettling image of a hand clawing its way out of a mass grave and an editing strategy that is little short of avant-garde. We are introduced to the bullet riddled body of The Stranger (Tomas Milian - he remains nameless throughout, and in typical spaghetti western fashion has no past or back story). What follows is a highly disjointed flashback illustrating exactly how this luckless bandit found himself left for dead. After robbing an army convoy of its gold he finds himself betrayed by Oaks (Piero Lulli) and his gang of cutthroats. The casual and sadistic way in which Oaks and his gang order The Stranger and his band of hapless Mexican’s to dig their own graves before mercilessly opening fire on them is disturbing due to the nonchalant attitude towards the value of human lives. Quite simply everything pales into insignificance when put next to gold and wealth. This theme continues throughout the film as a series of characters are introduced to reinforce the message that people will do anything (even sacrifice their own children) for profit. What is distinctive about this passage though is the editing courtesy of the films co-writer Franco Arcelli. The cuts are so rapid (one of which is upside down!) and the white heat of the desert setting (a building site in Madrid!) so blinding that this montage of images leaves a strong and disquieting aura that haunts the rest of the picture.

If this isn’t enough things really take a turn for the weird when the gang of murderers led by Oaks find themselves in a desolate and inhospitable town. Our first image of this town is the disturbing sight of a naked child, the second a child being abused by an adult. This is so brief however that it can easily slip through the net of consciousness. In no time at all this bunch of hard men find themselves shot to pieces and hung, the townsfolk got wind of the gold, and in this world that means death. Into this tense milieu rides The Stranger with his Indian assistants - the first thing he does is to gain revenge over Oaks, firing half a dozen golden bullets into his body. This leads to one of the most controversial and heavily cut scenes from the film - in order to save Oaks a doctor is ordered by the local cattle baron Zorro (Roberto Carmadiel) to remove the bullets (cue graphic close ups of knife entering flesh), on discovering the bullets are golden however those watching are unable to stop themselves leaping on the screaming man and tearing at his flesh to find the rest. We also get a very graphic scalping scene later in the film to keep gore hounds more than pleased.

Questi and his collaborators take every opportunity to abuse innocence and debase conceptions of morality. The purity of Evan (Ray Lovelock) is destroyed by Zorro’s black clad fascistic henchmen. His implied sexual molestation and eventual suicide is one of the films more distressing moments. Even in death Evan isn’t free from the abuses of avaricious men - his father buries the gold with him! Zorro himself is a brilliant caricature - he has a torture chamber, plays with toy soldiers, has a very talkative parrot, and could easily have strolled out of a Sergio Leone western. In the end every major character, with the exception of The Stranger, is a corpse - the fate of Hagerman (Francisco Sanz) ranks alongside Oaks’ demise - he unwittingly suffers a molten gold facial! The bleakness is somewhat alleviated by the beautiful music of Ivan Vandor (the main theme ranks alongside anything of Ennio Morricone’s), but this is a spiteful, angry, and inhuman vision of the west…I loved every minute!