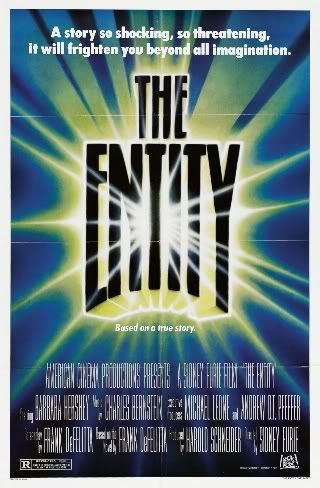 
In the wake of The Amityville Horror (1979) a ridiculous clunky haunted house film which purported to be based on true events, a number of horror films tried to use the same trick to sell tickets and add legitimacy to the sadistic events played out in the film. The Entity is one of the more sadistic poltergeist/haunted house films to see the light of day, but this hasn’t stopped its descent into cinematic obscurity. Unlike Poltergeist (1982) which revelled in and celebrated its fantasy elements (and is all the more enjoyable for it) The Entity is solemn and takes itself way to seriously - especially when you consider that the premise is simply suburban single mum gets raped and sexually molested by an invisible demon/poltergeist/spirit (the film is unclear as to what it actually is). The film is pretty unclear on just about everything, and the final message is confused. Unusually the film offers no clear cut answers to the paranormal events, but its position is clearly with that of the parapsychologists who emerge as unlikely heroes in the face of academic snobbery.

Carla Moran (played with grace and dignity by Barbara Hershey) is a hardworking single mother of three children, one of whom is grown up. By day she works and by night she studies at college. She struggles to make the payments on the house and spends her spare time pining for her lover, who is away on business most of the time. In other words Carla appears to be totally undeserving of the molestations she endures. The first attack is shocking, simply because it is so unexpected and so vicious and violent with the filmmakers leave nothing to the imagination. This entity is an abusive and violent rapist. The film never quite lives up to this opening, which establishes both Carla’s innocent and hardworking nature and her sudden status as victim. The screenplay is unable to resist the clichés of the form and we get plenty of shaking mirrors, broken ornaments and slamming doors. Unfortunately the impact of this imagery is destroyed by a thumping soundtrack which strikes up every time the entity is up to no good. 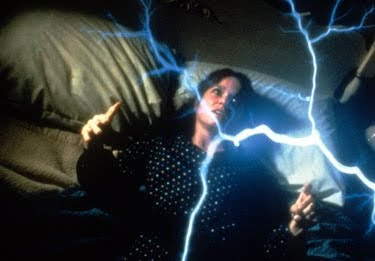 Naturally Carla is soon at the end of her tether and turns to the psychologists of a college in downtown Los Angeles to solve her problems. As with most films of this type the forces of rationality are totally sceptical of the events that Carla recounts and after some digging become convinced that she is merely exorcising a deep seated fear of sex she has repressed since childhood. The implications of a sexually abusive and deeply religious father is too much for the Freudian psychoanalysts to resist. The chief perpetrator of this scepticism is the bearded Dr. Sneiderman (Ron Silver) who takes an unhealthy and almost obsessive interest in Carla and dismisses the paranormal experts as little more than geeks. The divisions and snobbery within an academic environment offers an interesting layer to the proceedings, and shows that campus politics are a vital element of the running of such an institution. Carla is pretty much used as a pawn on this academic battleground, its quite clear that both sides are seeking to discredit the other to aid their own legitimacy.
The scepticism of the psychologists becomes wearying and tiresome and they are unwilling to believe even when numerous witnesses step forward. Even more stupidly they are unwilling to believe when they witness the phenomena themselves. The film revels in the failure of psychoanalysis, but indicates ultimately that the pig headed hypocrisy of self serving academic disciplines will result in the status quo being maintained. The finale is one of the silliest aspects of the film, as the parapsychologists create a mock up of Carla’s home and attempt to isolate the entity in liquid helium. But this is just one in a long line of absurdities. The special effects at the end are very unconvincing and crude, which is somewhat surprising considering a major studio was behind the film. In conclusion this is a mean spirited film and instead of offering explanation it uses the events to create more division. The human cost is quickly swept aside but a special mention must go to Barbara Hershey for a powerful portrayal of a pressured and fragmenting feminine presence that is able to absorb the slings and arrows of patriarchal ignorance.
© Shaun Anderson 2010
Posted by Shaun Anderson [The Celluloid Highway] at 21:04