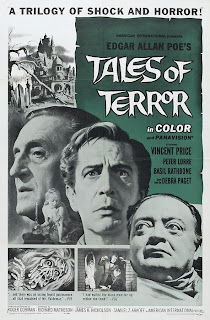 
It seems only appropriate after stretching the Edgar Allan Poe short stories The Fall of the House of Usher, The Pit and the Pendulum, and The Premature Burial to feature length that Roger Corman for his fourth trip into Poe’s feverish universe should choose the form of the anthology film. By this point the Poe team under the auspices of Corman and production company American International Pictures was familiar and tight nit. Richard Matheson was on hand to contribute his third screenplay to the series, and Floyd Crosby completed a Poe quartet in the department of cinematography, maintaining a lighting scheme that gave the Poe films a uniformity in their visual style. In front of the camera Vincent Price contributes four performances to the anthology, appearing in each segment, and using his silken tones as the narrator. Like any anthology the results are patchy and uneven, with some segments clearly better than others. But Corman and his collaborators once again achieve a delicate and hallucinatory climate of gothic phantasmagoria and hysterical melodrama.

The first tale which is an adaptation of the obscure Morella (first published in 1835) is the weakest of the three. It is the story of reclusive alcoholic Locke (Vincent Price) who is haunted by the death of his wife Morella. He is a disturbed man not averse to a bit of bodysnatching - the corpse of his wife lies in a state of decay and putrefaction in the master bedroom. Her body might be in unworkable condition, but her soul is very much alive, and on the arrival of their daughter (whom Locke blames for Morella’s death) it springs into life and possesses the unfortunate girl. All this is handled in a rather rushed and half-baked manner, and Matheson’s screenplay includes far too much character complexity for a twenty minute story. The art direction of Daniel Haller however is excellent, this is by far the best looking of the three stories - a suitably austere gothic mansion by the sea creates a mood of doom, which is continued within the decaying interior which acts as a metaphor for Morella’s state. Price is on autopilot here, and the fiery conclusion is dull and predictable.

For the second tale Matheson deftly combines elements of two of Poe’s most celebrated stories - The Black Cat and The Cask of Amontillado. The tone is considerably lighter as Peter Lorre and Vincent Price attempt to outdo each other in the comedy stakes, the comedy however is very black, but both actors rise to the challenge to make this particularly memorable. The wine tasting competition is a delight just for Price’s facial expressions and Lorre relishes the opportunity to deliver great lines such as “Pardon me, ladies, but could you spare a coin for a moral cripple?” and “Haven’t I convinced you of my sincerity yet? I’m genuinely dedicated to your destruction.”. Aside from a weird dream sequence in which the image becomes stretched in a strange hall of mirrors type effect elements of the supernatural are almost non-existent here. The cat itself plays a very small role, and is likewise invested with none of the supernatural overtones of the original text. Instead emphasis is placed on dialogue and performance, which is after all, the strong suit of the Poe films. Lorre is so dominant and the comic relief so effective that its easy to forget how abusive his character is, and this is testament to the sympathy he elicits from his peculiar appearance and accent. The success of this segment undoubtedly formed the basis for the tone of The Raven which followed in 1963. 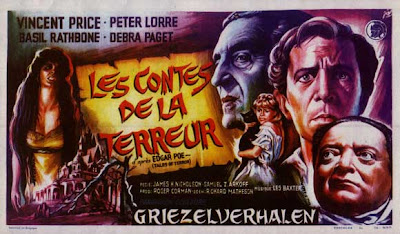 The final ‘tale of terror’ is a faithful adaptation of The Facts in the Case of M. Valdemar. It is a solid enough gothic tale, which is once again improved by excellent performances by Price as the dying Valdemar and Basil Rathbone as the sinister mesmerist Carmichael. As usual for Corman’s Poe films the female leads are bland, and the token romantic lead is wooden, but Corman gets to show off some weird colours with Carmichael‘s mesmerism device, and the quavering tortured voice of the dead Valdemar is suitably creepy. As one would expect Tales of Terror is visually impressive, the art direction is of a high standard, and Matheson’s screenplay is tight, and in the middle story, ambitious and inspirational. A memorable anthology horror film, which struggles in places against the restrictions of its format, but is essentially a lot of fun.
© Shaun Anderson 2010
Posted by Shaun Anderson [The Celluloid Highway] at 15:59