Although British horror spent most of its time in the sublime gothic landscapes of Hammer and its imitators or the tacky modern milieu of Amicus, every now and then some enterprising producer would decide that a holiday from these cliché ridden settings was needed. These horror holidays were largely set on islands off the coast of Britain, and enough of these films were made to form something of a subset within British horror/science-fiction. The most famous island excursion was the fateful investigation of Sgt. Howie on Summerisle. The apples are delicious but some of their customs might disagree with you. Other famous entries in addition to The Wicker Man (1973) include Doomwatch (1972), Island of Terror (1967) and Tower of Evil (1972). One of the more interesting and a personal favourite of mine is Night of the Big Heat. Its daft and its silly, but in the best tradition of British genre filmmaking it possesses a strange charm distinctly lacking in modern science-fiction/horror films. This particular film was also a holiday for director Terence Fisher who was on a temporary hiatus from his normal paymasters Hammer. Here he is working for producer Tom Blakely and his outfit Planet Film Productions (see also Island of Terror and Devils of Darkness (1965)). He was also swapping the genre of gothic horror for science-fiction, a change he wasn’t particularly well suited too - one only has to look at his earlier sci-fi flick The Earth Dies Screaming (1962) to see that Fisher didn’t hold science-fiction in the highest of regard. 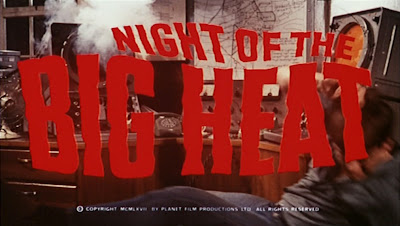 The three sci-fi films Fisher made in the 1960’s are extremely similar. All three explore the idea of a small and isolated community facing an external alien threat. They also spend large swathes of their running time showing the principal characters sat around talking in a pub. The message of this trilogy seems to be that if there is an alien threat on the doorstep just get your ass down to the pub, talk about it a lot, and then get pissed. As this is exactly what I would do in the event of an alien blob invading my town I have to admit to enjoying these pub scenes. In this film we even get to see the brilliant Peter Cushing swigging a half pint of lager! Unfortunately though it doesn’t make for the most exciting cinematic experience. The island in this case is called Fara (more importantly the pub is called The Black Swan) and despite the mainland enduring a harsh snowy winter, Fara is experiencing an unprecedented heat wave. Does the nearby meteorological centre have something to do with it? Perhaps the strange comings and goings of the brusque Hanson (Christopher Lee) is responsible for the series of strange events that are ultimately leading to death? 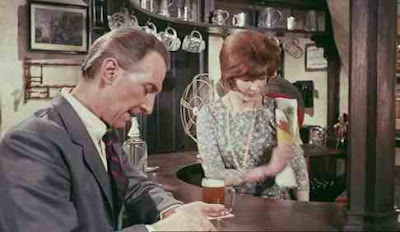 What makes Night of the Big Heat slightly better than the average British sci-fi movie is that the title is both literal and metaphorical, and the film works on two levels. Author and pub owner Jeff Callum (Patrick Allen) has to suffer the tormenting advances of Angela Roberts (Jane Merrow) a stunning babe with whom he had an affair with when living on the mainland. She assumes the identity of a secretary and the temperature begins to soar. Callum isn’t the only on affected, he is ultimately unable to resist the temptation and the film spends some time exploring a tense love triangle. The film is much better in this territory than it is with the sci-fi aspects. It is common in Fisher’s films for sexual promiscuity to be punished, and the attempted rape of Angela ultimately leads to her character being mere baggage when the alien invaders are finally faced. Christopher Lee puts in a rare sympathetic role as a scientist convinced of the alien invasion, even if his explanation is utter gobbledygook, and Peter Cushing is as charming as ever as a village doctor - but both Lee and Cushing perish in this film, which is a shame. For the large part the creatures remain unseen, instead we are alerted to their presence by a high pitched whining - when they are finally revealed they are an expected let down, but by this point the total absurdity of the whole enterprise makes their appearance an irrelevance. When it comes to modern settings Fisher seems like a fish out of water, and the assured touch he shows in his gothic horrors is lost here. The contempt Fisher had for sci-fi filters through on occasion and the whole project is undermined by a lack of commitment both in front of and behind the camera. Nevertheless this remains an interesting but totally nonsensical departure for all involved.
© Shaun Anderson 2010
Posted by Shaun Anderson [The Celluloid Highway] at 21:02