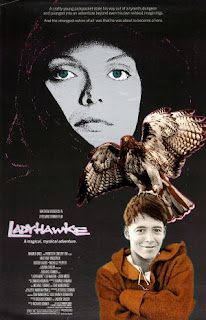 
With the success of such films as Hawk the Slayer (1980), Conan the Barbarian (1982), The Sword and the Sorcerer (1982), and Krull (1983) fantastical and mythical movies of sword and sorcery enjoyed an hitherto unseen commercial success in the early 1980’s. The cycle wasn’t to last long, but proof of its appeal was confirmed when the Italian’s got in on the act with a series of low budget rip offs such as the Ator series (1982, 84, 86, and 1990), Lucio Fulci’s dreadful Conquest (1983), and almost unwatchable crap like Throne of Fire (1983). As an index of box office appeal and success there was none greater in the 1970’s and 1980’s than the inevitable cycle of cheap Italian imitations. In many ways Ladyhawke (which strolled to No 1 in last month’s film review poll) is one of the most atypical of the cycle. There is no doubt in my mind that it would not have been made, were it not for some of the films previously mentioned, yet in an act of craven gutted cowardice, the filmmakers behind it chose to jettison the violence, and the special effects in favour of a soporific, sickly-sweet, saccharine, gag-inducing romance aimed at teenage girls. This is low calorie sword and sorcery (the sorcery element is also non-existent), but the filmmakers and producers are not beyond drawing from the genre (or should that be jumping onto the bandwagon) in order for their sugar coated medieval yarn to appeal to the widest audience. I can only imagine how mystified and disgusted male sword and sorcery fans were when they went to see this in theatres back in 1985.

The director was Richard Donner, he of such solid and entertaining, but ultimately uninspired fare such as The Omen (1976), Superman (1978) and the interminably dull Lethal Weapon series of films (1987, 89, 92, 98). It comes as no surprise that he brings his bloated and turgid style to Ladyhawke which takes 120 minutes to tell its ‘B’ movie story. The few action sequences that there are in Ladyhawke are directed in such a constipated fashion by Donner, that it quickly becomes apparent that we need to look elsewhere for inspiration and enjoyment. Donner even manages to bungle the long awaited battle between Captain Etienne Navarre (Rutger Hauer) and the evil captain of the guard that has replaced him; it goes on and on and on…! But not in the satirical fashion of Roddy Piper’s legendary fight with Keith David in They Live (1989); much to its cost Ladyhawke is an entirely po-faced venture in which talented people get to look stupid for two hours. Fortunately though we do have acclaimed cinematographer Vittorio Storaro (who won Oscars for Apocalypse Now [1979], Reds [1981], and The Last Emperor [1987]) on hand to capture some genuinely beautiful imagery of the Italian countryside. A sequence in which Alfred Molina’s swarthy and cruel hunter Cezar tracks Navarre in his wolf form in dark and eerie woodland is beautifully lit, and wonderfully evocative. Likewise a sequence in an iced over lake which sees Navarre and Isabeau (Michelle Pfeiffer), gaze lovingly into each others eyes, and stretch out for each other, only to have the rising sun cruelly snatch away their opportunity, is magnificently filmed, and is the most notable index of the torture and torment tearing the young lovers asunder. 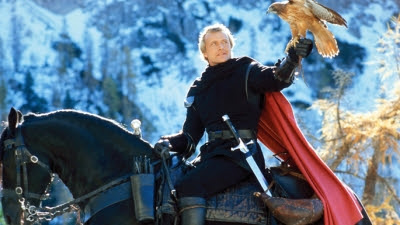 The main acting plaudits in this misguided aberration go to Matthew Broderick who plays thief and artful dodger archetype Philippe “The Mouse” Gaston. Broderick was fresh off the success of WarGames (1983) and somewhat surprisingly gets top billing here. Broderick is both the best and worst thing about Ladyhawke. Gaston is the only character in the film that develops; whilst Navarre’s journey is an odyssey of vengeance that culminates in the lifting of the Bishop’s (John Wood) curse, Gaston undertakes a moral odyssey, which sees him progress from a self centred and petty thief, to a much more rounded human being who stands on the threshold of adulthood. In many ways Gaston’s journey is a rites of passage, and the heartbreaking tragedy and mystery of Navarre/Isabeau awakens a need him to do something that is not entirely in service to himself. Unfortunately though Gaston is also incredibly irritating, his incessant one way monologue with God is especially grating, and the scene in which he and reformed padre Father Imperius (Leo McKern) hug each other, kiss each other, and cry in each others arms when the evil curse is lifted, makes you wish that the Bishop had claimed victory.

Most people who read this site will know that Rutger Hauer is my favourite actor, but on this occasion the brilliant Dutchman is hopelessly miscast. He visibly struggles with the dreadful dialogue, and doesn’t quite bring the depth of emotion required; though his skills with the sword and his obvious ability on horseback make him a very convincing former Captain of the guard. Equally bland and lifeless is the abysmal Michelle Pfeiffer and the two actors make for a very mismatched couple. It just doesn’t quite ring true, though the depths of the Bishop’s obsession, and his casual cruelty and sadism, makes him a convincingly odious villain, but one that is denied the screen time he deserves. Anyone familiar with Ladyhawke will know that it’s almost impossible not to mention the highly controversial and divisive soundtrack, which was produced by Alan Parsons and orchestrated by Andrew Powell. Parson’s stock-in trade of layered keyboards, drum machines, and overly polished production is entirely inappropriate for a medieval adventure set in 13th century France. That said, the music actually isn’t that bad at all, and I have to admit my sympathies here, because I own most of the albums put out by the Alan Parson‘s Project. Almost every aspect of this $20,000,000 turkey feels jarring and misplaced, from the casting, to the direction, to the soundtrack. The only person who could be said to have enhanced his CV with this film is cinematographer Vittorio Storaro.