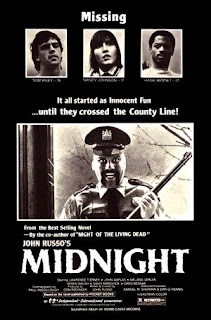 
John Russo will be a familiar name to any self respecting enthusiast of cult horror cinema. He co-wrote the screenplay for Night of the Living Dead (1968), a film that turned out to be a clarion call for a new and vital form of modern horror expression. His contribution to this film and its resulting influence on the wider landscape of the horror genre affords Mr. Russo generic immortality; but what of his other contributions to cinematic history? I have to confess seeing the name John Russo attached to a film would not inspire me to watch it, in much the same way that George A. Romero’s wouldn’t either. For me this is a seal of mediocrity rather than excellence. I’ve always recognised the importance of Night of the Living Dead within its genre, and it is within the terms of generic discourse (or theory if you like) that the film signals its innovation and radicalism. But I don’t like the film - instead of going into the reasons here, check out my review. In Romero’s defence he has at least gone on to make a number of important additions to the horror genre; Mr. Russo has done nothing of consequence. His follow up (if you will) to Night of the Living Dead marked his directorial debut, and the movie was called The Booby Hatch (1976). I think the title alone tells you all you need to know about Russo’s post Night of the Living Dead credentials. In addition to a career as a screenwriter (sixteen credits to date), and director (nine credits to date) Russo was also something of a novelist, and one of his novels Midnight made it to the screen in 1982. 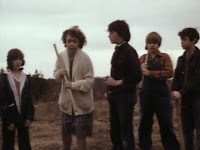 As anyone who has followed this site will know, I’m not particularly enthusiastic about slasher films. In fact I think they are moronic, infantile, largely boring, and only of interest to imbeciles. However I do have a certain amount of charity for rural set slasher films. But my charity can only extend so far, and on the evidence of this celluloid offal Mr. Russo isn’t deserving of any. Russo wrote the novel, he wrote the screenplay, and he directed, and had the unenviable task of working with a paltry $70,000 budget (he’d certainly come a long way since Night of the Living Dead!), so I suppose I must credit Russo for actually completing the movie. I also must credit Russo for being the one responsible for the films myriad weaknesses, and for its overall air of student film amateurishness. The low budget isn’t an excuse, though Russo would undoubtedly like to tell you it was. Film history is littered with exceptional films made for the same amount, or even less. Midnight opens in a very promising fashion with the chilling attack on a young girl caught in a trap, battered into unconsciousness by other children no less. This psychotic family of violent delinquents are controlled by an evil matriarch who has indoctrinated them in to worshipping Satan. This prologue concludes with the sacrificial slaughter of the young girl, much to the delight of the fascinated spectators. These are extremely arresting images, and the rural backdrop, with its skeletal trees, and dull autumnal colours, creates a palpable atmosphere of dislocation and alienation. Unfortunately though this is as good as Midnight gets! 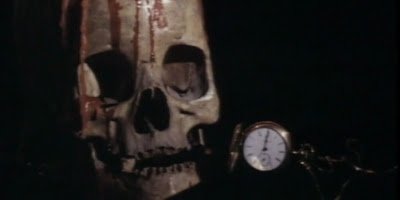 There are certain themes that Russo is overly preoccupied with, and like his one time collaborator George A. Romero, he is determined to express them obviously and repetitively. Every family we see in the film is dysfunctional. Every parent is ineffectual, corrupt or evil. The nature of religious belief is explored through a lens of shame, especially for the butch tomboy Nancy (Melanie Verlin) who is torn between faith and sexual desire. She gives in to the latter, confesses her sins, and must offer a penance to be absolved of her crimes against the faith she serves. Later on when she is caged like a dog by the family of redneck misfits, in readiness for the sacrificial altar, she believes she is being punished for the sins confessed at the start of the film. Her desperate prayers are a pitiable sight and one feels sorry for her. She finds herself in the backwoods of rural Pittsburgh because of the drunken lechery of her cop stepfather Burt (Lawrence Tierney – clearly short of a shilling!), a grotesque overweight pervert who ends the film as unlikely hero. Unfortunately the film invests so little in the characters that Burt’s resurrection from paedophile to saviour is as absurd as it sounds. 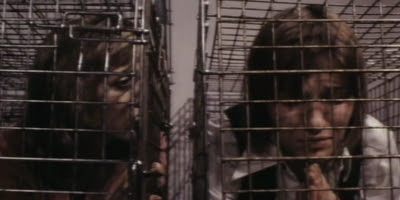 For Nancy a road trip to California ends in a cage, but on the way we are treated to endless and interminable scenes of driving; it wouldn’t be so bad, were it not for the fact that their journey is regularly accompanied by a hilariously inappropriate song on the soundtrack. A subplot involving a morbidly obese killer, who giggles and sweats his way to the murder of a black priest and his daughter, seems to make little sense, until we discover this gross mound of cellulite is part of the Satanic cult. Perhaps the most unsavoury moment in the film comes when the trio of roadsters encounter a posse of racist rednecks in a hick town. To add a little colour to the dour and grey Pennsylvanian sky we have a pissed up John Amplas trying in vain to stay awake, a reasonably impressive beheading credited to Tom Savini, and the mummified corpse of the evil mother, who sits in a rocker chair, in an insulting tribute to Psycho (1960) and The Texas Chainsaw Massacre (1974). Russo’s attack on a variety of ‘sacred’ social institutions may have had more bite if Midnight didn’t continually compromise itself with technical shortcomings, and dreadful performances, check out the bald guy for example. The only performance in the film I liked was by the distinctive Robin Walsh as Cynthia, the high priestess of the backward cult. The film successfully conjures up an atmosphere of dreary and sleazy desolation, but this isn’t enough to save such a stupid film from the trash compactor.