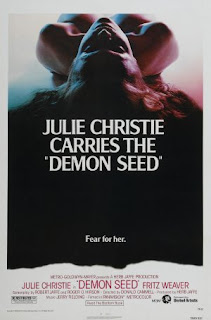 
With the success of 2001: A Space Odyssey (1968), Colossus: The Forbin Project (1970), and Westworld (1973) technophobia became one of the major ‘meta-narratives’ of 1970’s American cinema. It sat comfortably alongside the ‘Revolt of Nature’ movie, the conspiracy thriller, the disaster movie, and movies set in post apocalyptic wastelands. All of these thematic strands functioned in very similar ways, and all of them sought to punish mankind for its hubris and arrogance. Other interesting examples of the ‘Revolt of Technology’ narrative include The Terminal Man (1973), Killdozer (1974), Futureworld (1976), The Car (1977), Android (1982), The Lift (1983), and Runaway (1984 - any more nominations please feel free to leave a comment!). But arguably the most absurd extension of this thematic pulse came in 1977 with Donald Cammell’s film of the Dean R. Koontz novel Demon Seed. Unlike his contemporary Stephen King, Koontz has largely been overlooked by Hollywood producers, and now churns out novels with such alarming regularity that each feels as inconsequential as the previous one. Whilst cinema screens have proved resistant to Koontz’ brand of fantasy, he has found a more receptive environment on television. A cursory glance at Koontz’ filmography however indicates that Demon Seed is easily the most prestigious and important film to be based on his work.

Although the central premise of a fully automated computer system siring a child through forced insemination is completely barmy, Demon Seed manages to somehow pull it off. It becomes a very troubling film because the filmmakers take a more philosophical and ambivalent approach to the question of what it is to be human. I found myself rooting for the super computer Proteus IV because it/he represents a force of radicalism and transgression within the orthodoxy of capitalism. The decision to give him the power of thought is entirely due to the vanity and egotism of lead scientist Alex Harris (the bearded Fritz Weaver), as a result of this decision, is it so incredible that Proteus’ ultimate ambition would be to leave the computerised prison he finds himself in and evolve into a new form that can physically interact with the world? His initial attempts to have freedom through a computer terminal are arrogantly snubbed, Proteus has no option but to revolt against his masters. His revulsion at being ordered to think up new and efficient ways to plunder the natural resources of the earth makes him something of an environmental and ecological champion, and his refusal to bow to the orders of the corporation that funded him suggest he has leftist credentials!

Whatever anyone might say in justifying the motivations and desires of Proteus, one undeniable fact of Demon Seed is that Susan Harris (Julie Christie) doesn’t deserve the torment she endures. She is a child psychologist, and is particularly sensitive to the notion of birth/children thanks to the untimely death of her daughter from leukaemia. Alex is able to totally absorb himself in the realisation of Proteus (to his credit one of the first results of the computers creation is a cure for leukaemia), but Susan must endure seeing the dehuminsation of both her husband, and the environment she lives in. Their home is entirely automated and run by a computer called Alfred. The marital problems suffered by the couple are odd, because they hinge entirely on opposing philosophical viewpoints about the nature and extent of computerised automation. One error that Proteus makes when he takes control is forcing Susan to do what he wants. One would expect him to have some sympathy for her situation, considering it was his own lack of control that has led him to take the action he has. But with the exception of the nerdy and harmless Walter (Gerrit Graham) Demon Seed is completely lacking in compassionate and understanding male characters. It comes as no surprise that Walter fails to survive the film, and his bizarre decapitation is something of a grisly highlight. With the cold, clipped, and precise vocal delivery of an uncredited Robert Vaughan as Proteus IV, he is a total reflection of the conceited male pride that has fostered him.

Demon Seed works extremely well as both a science-fiction film and a horror movie. The central premise is truly horrifying, but to get to that stage Proteus must invade the Harris’ home, and subsequently the film functions for much of its running time as a ‘Home Invasion’ narrative. There is also an odd surrealist layer to the film; the physical manifestation of Proteus is a completely strange structure that resembles a 3D puzzle, and the insemination of Susan is represented on screen by a psychedelic and kaleidoscopic sequence that evokes memories of the Star Gate in 2001: A Space Odyssey (1968) and is as equally trippy. Other highlights include an armed wheelchair, and the astonishing sight of Proteus in his physical form exploding through the floor. These elements coalesce into a whole that can only be described as weird, and is made even more unusual by the fact that a major Hollywood studio produced the film. I think the director Donald Cammell, who had previous experience in the peculiar and bizarre with Performance (1970) is largely responsible for this. But what is equally noticeable is the stylish way in which the narrative unfolds with patience, and how the film avoids pandering to lurid exploitation. On paper Demon Seed should’ve been a dismal failure, but in retrospect it is easily one of the most transgressive, challenging, and radical Hollywood pictures of the 1970’s.
© Shaun Anderson 2011
Posted by Shaun Anderson [The Celluloid Highway] at 21:01