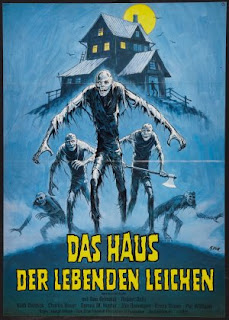 
This dreary and depressing slasher flick was the inspiration of writer/director Joseph Ellison. I use the word inspiration cautiously in this case, because it would be fairly clear to anyone who has watched this film that Ellison was very familiar with Alfred Hitchcock’s Psycho (1960). Elements borrowed include a socially inept alienated psychopathic protagonist, a monstrous matriarch who also rots away in a chair and who also taunts the protagonist from beyond the grave, and a suitably creepy and gothic house on the hill. However there are also some key differences which enable the film to just about stand on its own two feet. The psycho in question Donny Kohler (Dan Grimaldi) stalks his victims whereas Norman Bates waited for them to come to him. Kohler also has a fetish for dressing up the charred corpses of his female victims and creates a kind of macabre family for himself. Norman Bates meanwhile collected stuffed animals rather than dead people. Don’t Go in the House also has a highly subjective attitude to narration. From the outset we are placed inside the head of Donny Kohler. We are given access to his motivations by virtue of flashbacks and by the disembodied voices that haunt and torment his waking moments. The result is that the film manages to explain away Kohler’s psychosis far more successfully than Hitchcock’s movie which resorts to a hackneyed summing up by a psychologist at the end. 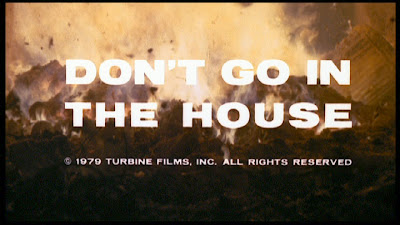 The screenplay by Ellison, Ellen Hammill and Joe Masefield invests a lot of time in developing Kohler’s character, and while he never becomes sympathetic (largely due to Grimaldi’s slimy performance) his behaviour is consistent with a childhood marked by terrible abuse. Another successful aspect of the screenplay is the way in which fire is developed as a symbolic motif. The accident that opens the film in Kohler’s place of employment offers the first indication of his obsession and is a precursor to both the method of execution he chooses for his victims, and the nature of the abuse he suffered at the hands of a domineering and sadistic mother. Kohler is a child in a man’s body and this is highlighted when he discovers his mother has quietly passed away in her bedroom. Kohler indulges in all the things that would have resulted in punishment in the past; he plays his music loud, jumps all over the furniture, and smokes in the house. More disturbingly he mocks his mother, slaps her cadaverous face, teases her lifeless corpse with a lit match, and ultimately leaves her blackening carcass to ripen. Another thing he can do is bring women back home, but his reason for doing so is unconventional to say the least! 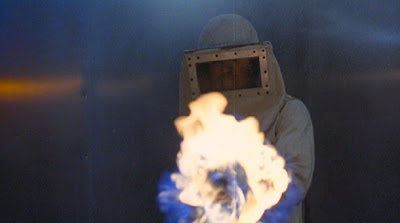 One of the more perplexing aspects of Don’t Go in the House is how a limp and uncharismatic slime ball like Donny Kohler manages to pick so many women up. Furthermore he needs to convince each one of them to return home with him, mere minutes after meeting them. Very few slasher films rely on such a contrivance, and the subsequent stretch in credulity is quite damaging to this film. Furthermore it leads to a number of repetitive sequences involving Kohler patrolling the roads in his van, the cumulative effect of which is a reduction of pace and a certain amount of audience tedium. However we are compensated for this with one of the most audacious and astonishing killings to ever grace a slasher film. Kohler’s first victim awakens from her unconscious stupor to find herself chained up in a stainless steel encased fireproof room. The psychopath appears bedecked in a flame proof suit and proceeds to immolate his screaming victim with a flamethrower. What makes this sequence so powerful and disturbing is the directors refusal to cut away, and its appropriateness within the context of the films depressing tone, and Kohler’s own history of abuse.  Such was the power of this moment that the UK censor consigned Don’t Go in the House to the status of a ‘Video Nasty’ in the early 1980’s. 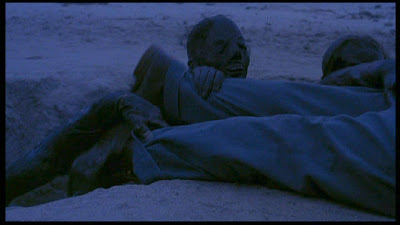 Other moments are less successful; Kohler’s friendship with Bobby (Robert Osth) comes across as rather absurd, and culminates in an incredibly daft and unnecessary sequence in a downtown nightclub. It further illustrates Kohler’s social ineptitude, but do we actually need any more evidence of this? It does however provide the film with one moment of genuine warmth when Kohler visit’s a local boutique in order to find suitably trendy clothes for the occasion. The subplot involving Kohler’s relationship to the Church and specifically Father Gerrity (Ralph D. Bowman) is also a non-starter, and Bowman is incredibly unconvincing as the parish priest. A prophetic nightmare in which Kohler is tormented by his victims is far more successful, and offers a nice little subjective echo to the films finale. Don’t Go in the House has more than a few similarities to William Lustig’s Maniac (1980), and it seems unthinkable to assume that Lustig hadn’t seen this film before he started work on his own. The film ends on an ambivalent note, one that is open to interpretation, but confirms the films stance on the cyclical nature of abuse. This is an incredibly dour, grim, and gloomy little film. But Don’t Go in the House deserves credit for not pulling any punches and for its adherence to a contextually suitable tone.
© Shaun Anderson 2011
Posted by Shaun Anderson [The Celluloid Highway] at 19:08