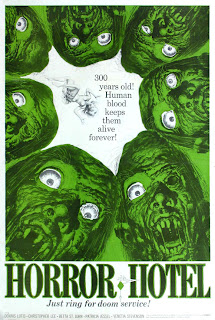 The City of the Dead belongs to a subset in British horror cinema that explores the relationship between the arcane beliefs of witchcraft and the occult and contemporary modernity. Other notable examples include Night of the Demon (1957), Night of the Eagle (1962), Witchcraft (1964), and The Witches (1966). Although The City of the Dead was produced under the banner of Vulcan Productions, in many ways it can be considered the first production of Amicus. Max J. Rosenberg  was an uncredited producer here, with Milton Subotsky taking the role of executive producer as well as contributing the story upon which the screenplay by George Baxt was based. In its own way then The City of the Dead is an historically important film, though you wouldn’t think so thanks to its descent into relative obscurity. This was a situation that was remedied somewhat by the DVD release courtesy of VCI in 2001. What makes the film particularly striking and unusual was the decision by the filmmakers to recreate the town of Whitewood, situated deep in the heart of the Massachusetts countryside, on a soundstage at Nettlefold studios, which was situated deep in the heart of the Surrey countryside in England. This gives the film a unique look, and a slightly surreal vibe, which is heightened significantly by Desmond Dickinson’s lustrous monochrome cinematography. 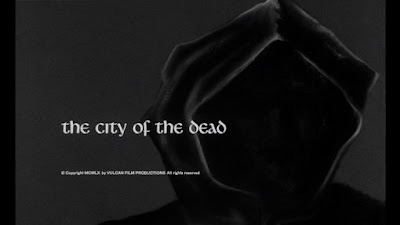 The majority of reviews for this film endlessly wax lyrical about the mist wreathed setting, the supposedly Lovecraftian atmosphere, and a less is more approach that inevitably evokes the 1940’s chillers of Val Lewton. The filmmakers certainly accomplish a feeling of time having stood still, of a town (to call it a city is a joke) that has been unable to join modernity because of a past event which saw the witch Elizabeth Selwyn (Patricia Jessel) burned at the stake. The obligatory curse spat forth from her lips ensuring that this is the sort of town that you are warned not to stay in, and in which the citizens (all five or six of them) stare at newcomers with ill disguised hatred and contempt. Unfortunately though the modern world itself, which is supposed to act as a counterpoint to the inbred curse riddled backwater, is very poorly conveyed. The University setting which follows the prologue consists of little more than a single room, and the office of Prof. Driscoll (Christopher Lee), and our only other indication of contemporary life is a brief sequence at a house party. So while the filmmakers can be commended for bringing Whitewood to life on a soundstage, the lack of location shooting for sequences outside of the cursed town is quite damaging. 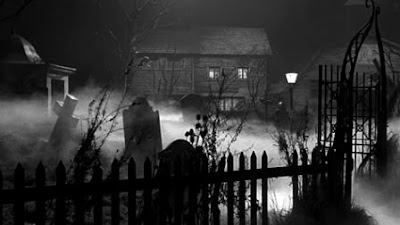 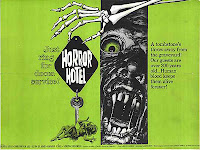 The result of this makes The City of the Dead a thematically hollow experience, one that is almost entirely saved by its visual presentation. It is the least interesting of the British witchcraft/occult pictures for that reason, but is effortlessly the most atmospheric. The plot unwinds with a ridiculous amount of inevitability, the predictability made even more stodgy with a series of obvious clues. The most glaring one being the presence of Christopher Lee, the second being the name of the hotel; The Raven’s Inn, and the third being the physical resemblance between Selwyn and the proprietor of the hotel Mrs. Newless. Nevertheless Nan Barlow (Venetia Stevenson) is still unwittingly drawn ever nearer the sacrificial altar, her thesis on witchcraft to remain unwritten. The demise of Nan is the only real surprise in the movie, a plot device which offers numerous moments that connect it to Alfred Hitchcock’s Psycho (1960). Unfortunately the destruction of Nan by the Satanists robs the film of an engaging and likeable protagonist. She is all too soon replaced by the ultra bland Dennis Lotis who plays her brother Richard. 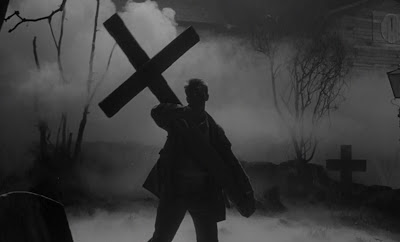 The final twenty minutes sees the film shift into more interesting terrain as the necromancers prepare to offer another sacrifice to their evil master. We are privy to hidden tunnels, the perpetual sound of chanting, the obligatory flashes of lightning, and an overpowering sense of claustrophobia. The sense of evil at work is brilliantly conveyed in the graveyard, as is the desperation of the coven to fulfil their duties to the unseen forces of darkness. It is the invisible nature of a palpable evil which necessarily evokes Lovecraft, and the manner in which the villains are despatched, ends the film on a disquietingly cosmic note. In a somewhat surprising turn of events Christopher Lee is entirely dull in this film, and his efforts are totally overshadowed by Patricia Jessel who dominates the film with her icy presence. It is her conviction, knowing glances, and steely resolve -  resolve that has survived the centuries, that most impresses. Anybody who can count Valentine Dyall as a subservient sidekick is terrifying in my book. The City of the Dead is an intriguing production, but works far better as an exercise in stylistics than as a thematically rich or generically rewarding experience.
© Shaun Anderson 2011
Posted by Shaun Anderson [The Celluloid Highway] at 21:12