I make no apologies for the fact that the legendary Italian composer Ennio Morricone will figure prominently in the landscape of Celluloid Sounds. I have been a great admirer (who isn’t?) of Mr. Morricone’s film music for many years and am excited at the opportunity to pay fulsome tribute to him on The Celluloid Highway. In the first of this two part series I will be casting my eye and ear over Morricone’s often wonderful contributions to the Italian giallo cycle. In the 1960’s Morricone rose to international prominence with his unique and often imitated compositions for Sergio Leone’s trilogy of ‘Dollars’ westerns featuring Clint Eastwood as the implacable unnamed anti-hero. Many more superb soundtracks for the so called ‘spaghetti’ westerns followed. Some of my personal favourites are Navajo Joe (1966), Face to Face (1967), Death Rides a Horse (1967), The Great Silence (1968) and Companeros (1970). Although public perception strongly associated the maestro with this genre, the 1960’s were in reality a decade of diversity for the prolific composer, as he hopped effortlessly from one genre to another. In 1970 Morricone was invited to compose the music for Dario Argento’s directorial debut The Bird with the Crystal Plumage, thus beginning a relationship with the giallo cycle that would encompass fourteen films. This opening instalment will investigate the first seven. 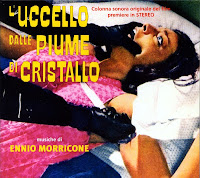 Dario Argento’s filmmaking debut has assumed a position of unparalleled prominence in discussions of the gialli cycle. It’s a position which I believe to be somewhat questionable. Between the release of Mario Bava’s The Girl Who Knew Too Much in 1963 and Argento’s film in 1970 well over twenty giallo films had seen the light of day. The difference of course was that none of these had set the international box office alight. Argento’s film was also more self-consciously indebted to the West German ‘Krimi’ cycle, which founds its inspiration from the pages of Edgar Wallace. Argento certainly had some refreshing stylistic tricks up his sleeve, and his playful attitude to gender maintained a sense of mystery that concluded in a fine twist. But the true importance of this films lies in the fact that it made the giallo a commercially viable genre. The soundtrack by Ennio Morricone has been released in a variety of editions over the years, the most prized of which perhaps is the Capital Records US LP released in 1970. My copy is the Cinevox CD release from October 2008 that includes a number of bonus tracks, the cover of which can be seen here.  This appears to be the most widely available edition of the soundtrack. The extract I have chosen is Piume di cristallo. 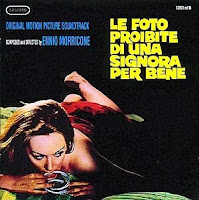 Morricone’s second gialli soundtrack of 1970 was for Luciano Ercoli’s distinctive tale of sordid blackmail and murder Forbidden Photos of a Lady Above Suspicion. Ercoli would go on to helm two more interesting gialli - Death Walks on High Heels (1971) and Death Walks at Midnight (1972) featuring the statuesque talents of Nieves Navarro aka Susan Scott. Forbidden Photos… was co-written by Ernesto Gastaldi whose numerous contributions to the cycle remain underappreciated and under researched. Morricone provides a much a jazzier score than The Bird with the Crystal Plumage, with a number of lounge music numbers that compliment the sleazy nature of the plot. This is not the easiest soundtrack to get hold of. The most complete edition would appear to be the Verita Note Japanese release from Oct 2006. The last time the soundtrack was issued on CD in Europe was Dagored’s 1999 edition. The extract I have chosen is Intermezzino Pop. 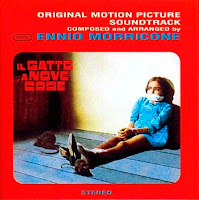 In 1971 Morricone would go on to compose the scores for no less than seven giallo productions. After the success of The Bird with the Crystal Plumage and the centrality of its music, it was only logical that Morricone should be invited to score Dario Argento’s second film The Cat O’ Nine Tails. In almost all key filmmaking departments Argento’s second gialli was less successful than his debut film, with the honourable exception of the music. Here Morricone develops nuanced and textured compositions which compliment themes of lost childhood innocence. Originally released on the Dagored label on LP in 1971 this is a very visible soundtrack thanks in part to the issuing of the single Ninna nanna in blu in Feb 1971. Dagored’s CD release in 2000 runs for 59:30 and contains three bonus tracks. This was trumped for completeness by the GDM CD Club October 2006 edition which runs for 1:13:33. The extract I have chosen is the title them Ninna nanna in blu. 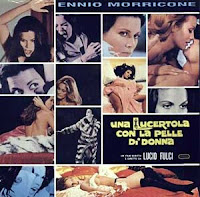 Lucio Fulci only set foot within the gialli landscape on three occasions. The first of these was his distinctive London set thriller A Lizard in a Woman’s Skin, featuring the acting talents of Florinda Bolkan, Stanley Baker and Jean Sorel. With its fragmented and illusory structure and unreliable protagonist, Fulci’s film has a number of impressive moments of surreal dream-like beauty. The music compliments this mood excellently as Morricone utilises a more experimental and chaotic tone to reflect the subjective hysteria of the central character. The soundtrack first emerged on CD in 1996 and was issued by Screen Trax and contained fifteen tracks running to 1:01:18. This was trumped in 2000 by by Dagored who issued both a limited edition thirteen track LP and a nineteen track expanded CD, the latter of which runs for 1:13:40. The extract I have chosen is La Lucertola. 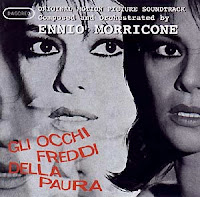 Cold Eyes of Fear marked the only occasion that director Enzo G. Castellari entered the realm of the giallo. Castellari was more famed for his westerns at this point and as the 1970’s wore on would become strongly associated with the poliziotesschi cycle with a series of high octane action movies such as Street Law (1974) and The Big Racket (1975). This is another London set gialli, and that is perhaps the most distinctive thing about it. This is a tired and uninspired film, with a host of tepid performances, and a strange lack of energy uncommon for Castellari. The soundtrack is likewise highly divisive. Morricone opts for a more avant-garde approach and the film lacks a strong central theme. I don’t mind admitting this is my least favourite Morricone giallo score. Like the previous soundtrack Dagored released this on both a limited edition LP and CD in November 2000. The difference here being that both LP and CD are identical, featuring sixteen tracks running to 45:04. Music from Cold Eyes of Fear had appeared earlier on Point Records 1996 CD which paired it with selections from The Fifth Cord (1971). The extract I have chosen is Seguita. 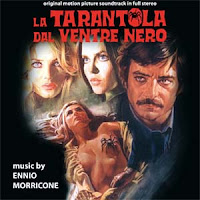 The beautifully titled Black Belly of the Tarantula was writer/director Paolo Cavara’s only giallo entry. Cavara achieved notoriety in the early 1960’s as one of the co-directors of Mondo Cane (1962), but in Black Belly… he creates a stylish and tense film that benefits tremendously from the fine performance of Giancarlo Giannini, and a profusion of gorgeous actresses that include Claudine Auger, Barbara Bouchet and Barbara Bach. All of whom would achieve fame as Bond girls. The killers novel approach which involves paralysing the victims with a poisoned needle inserted in their necks, before stabbing them to death, gives the film a unique feel which Morricone’s music easily matches. This is a very stylish score and one of Morricone’s best. For many years the soundtrack was only available as part of the CAM labels 1992 release which paired it up with I Malamondo (1964). The CD was weighted in the latter’s favour, with Black Belly only managing eight tracks to I Malamondo’s nineteen. This was readdressed in June 2007 with Digitmovies fifteen track CD which ran for 57:36. The extract I have chosen is Un uomo si e'dimesso. 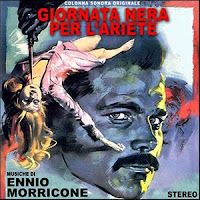 The Fifth Cord marked the only occasion that Franco Nero would appear in a giallo. He plays alcoholic journalist Andrea Bild who is forced to begin his own murder investigation in order to both clear his name and save his life. The director was Luigi Bazzoni who would go on to make the offbeat and peculiar gialli Footprints (1975) with Florinda Bolkan. The Fifth Cord is a much more conventional offering, though it achieves moments of beauty thanks to the exceptional cinematography of Vittorio Storaro and of course the wonderfully sleazy lounge music of Mr. Morricone. Music from this film first saw the light of day on Point Records 1996 CD which paired it with Cold Eyes of Fear. In September 2001 the film got a singular release by Dagored who put out a 24 track CD which ran for 58:07. An enhanced version featuring 31 tracks and running for 1:14:01 was released in Japan on the Verita Note label. The extract I have chosen is Trafelato.

Posted by Shaun Anderson [The Celluloid Highway] at 17:09