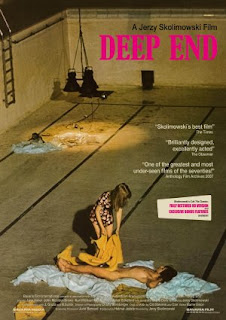 
I am a firm supporter and collector of the BFI’s Flipside imprint. With a remit to release obscure British cinematic rarities in dual format edition packages, already such wonderful treasures as The Bed Sitting Room (1969), Herostratus (1967), The Party’s Over (1965), and Bronco Bullfrog (1971) have been unearthed for an unsuspecting audience. The BFI’s excellent and important work continued with the issuing of Polish director Jerzy Skolimowski’s criminally under distributed tale of sexual obsession Deep End. My previous experience with this audacious art film came as an undergraduate, when I was fortunate enough to watch an off air recording on VHS. However as this was recorded off television sometime in the mid 1980’s the delicate textures and symbolic use of colour was all but lost amid the washed out and faded video image. In some strange way though the dilapidated and worn out vision of a London that had done all its swinging a couple of years before was somehow enhanced by the worn out VHS visuals. Although the rundown and decrepit London we see is still very much in evidence on the gorgeous HD transfer, it is the primacy of the colours, and their strikingly figurative role which takes centre stage. 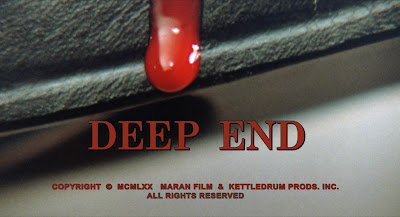 Time and again we see in cinema that the perspective of the outsider can often illuminate a certain truth about a society. Skolimowski was an émigré filmmaker who like his colleague and countryman Roman Polanski found himself in London at a time when it was the cultural capital of the world. While Polanski crafted a horrifying, highly disturbed and paranoid vision of ‘swinging’ London in his nightmarish psychological horror film Repulsion (1965) Skolimowski’s attitude to British society was embellished with a certain absurdist and surrealist sensibility. The first triumph of Deep End lies in the success of the filmmakers in recreating a clapped out municipal baths in Munich. Although there was some location shooting in Fulham, the vast majority of the film was shot with a West German crew in Bavaria. On no single occasion does the illusion falter due to an attention to production design and art direction that is nothing short of inspired. 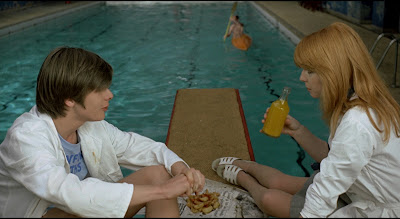 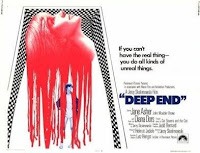 The film opens with fifteen year old Mike (John Moulder-Brown) cycling excitedly to his first job accompanied by the strains of Cat Stevens. Moulder-Brown conveys an effortless innocence, and a shy introversion that comes with the self-conscious awkwardness of the virgin. His main difficulty at work does not lie with the physicality of the job, but with the strong feminine presence in attendance. The first of these is the stunning Susan (Jane Asher) a sexually promiscuous young lady who delights in Mike’s discomfort and takes every opportunity to tease and torment him. Bedecked in her day-glow yellow coat, white boots, and swishing her flame red hair, Susan is merciless in leading Mike on and regularly stokes his burgeoning sexual obsession. With its peeling sickly green painted walls the building mirrors the sexual iniquity of its customers. Mike experiences this first hand in a standout sequence featuring Diana Dors. You’ll never view football the same after Ms. Dors’ breathless antics. All the while the director is introducing certain colour schemes that offer a prophecy of future events. The keynote colour here is red. The film opens with a drop of blood, later a painter and decorator randomly starts painting the walls red, and perhaps most importantly of all is Susan’s red hair. 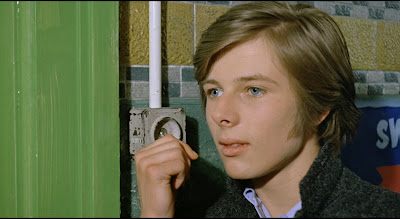 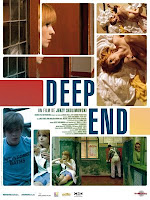 Perhaps a weakness of the film is that it sets up an atmosphere in which a tragic outcome is easily telegraphed by the audience. One knows that Mike’s increasing obsession which eventually leads to him stalking Susan and actively attempting to destroy her relationship can only end in disaster. Susan is engaged to Chris (Christopher Sandford) a loathsome individual whose idea of a romantic date is taking her to a nearby porn cinema. The other principal male character is a randy swimming instructor played by Karl Michael Vogler. He uses his position of authority to fondle the underage girls in his care and embarks on an affair with Susan. All of the male characters are damaged by their need for sex, and are extremely vulnerable when faced with someone as mercenary as the permissive Susan. But despite the ominous tone that steadily develops, Skolimowski enthuses his film with such an offbeat and quirky sense of humour that the film never becomes oppressive. Take for an example the recurrent joke between Mike and the hot dog vendor, Mike’s encounter with a crippled hooker, and most farcically of all Mike and Susan’s feverish search for a diamond in the snow. 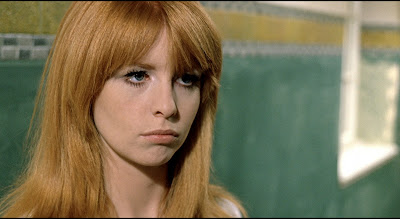 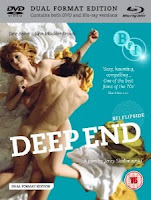 At a certain point in the extended sequence in Soho the film shifts into a space which might well be Mike’s fantasy. The repetitive pulsing rhythms of the German progressive rock band Can feeds into this sense of disconnectedness. A fragmentary state develops which culminates in Mike’s discovery of a nude cut out which may or may not be Susan. His fantasy of swimming with the lifeless cut out is our most notable signpost yet to the fate that will befall the characters. Deep End is both a coming of age comedy and a dark psycho-sexual thriller. It balances these two approaches with aplomb and these two forms are linked by the director’s peculiar and eccentric view of sexual permissiveness in early 1970’s London. Much credit must go to the writers (Skolimowski himself, Jerzy Gruza and Boleslaw Sulik) for maintaining a non-judgemental and morally ambiguous stance toward the principal characters.
© Shaun Anderson 2011
Posted by Shaun Anderson [The Celluloid Highway] at 17:39