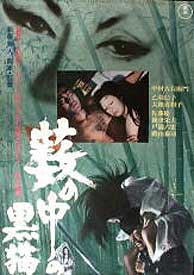 
Japanese filmmaker Kaneto Shindo is best known to western audiences for his shattering and moving tribute to the survivors of atomic destruction in the drama Children of Hiroshima (1952) and his sultry and sensual historical horror film Onibaba (1964). The latter is an evocative and oppressive allegory of Japanese class and social divisions and the tragic effects of a corrosive sexual jealousy. For Kuroneko Shindo recycled the basic premise of Onibaba (in which two resourceful women lure samurai to their death for material gain) and retained the same historical setting, war torn landscape and aesthetics of hunger. Kuroneko is a more conventional horror film in the sense that it foregrounds aspects of the supernatural, demon curses, and the quasi-mythical image of the cat. It makes use of the Kaidan or avenging spirit motif which unites much traditional Japanese horror and is brought to atmospheric life by beautiful monochrome cinematography and a formal eloquence that marks it out as one of Shindo’s most visually elegant productions. Despite these familiar signifiers however the film is still strange and otherworldly, and in its attention to traditional theatrical modes of narrative address possesses an inherently alien quality which is eminently fascinating. The film opens with static medium shot of a solitary farm on the outskirts of a woodland. The length of the shot brings attention to the stillness and tranquillity of this rural idyll. It is only when this peacefulness has fully seeped in do we notice figures stealthily creeping out of the woods. A bedraggled and exhausted troop of samurai wearily make their way towards the small hut - on discovering two woman inside, it becomes clear that any code of ethics these starving men have are about to go out of the window. Shindo cuts away from the barbaric gang rape the women endure and returns to the establishing shot which opened the film. The women lie dead in the hut, and one final insult sees the samurai leader set their home on fire. In the ashes a cat explores the ruins and sets up a solidarity with the dead peasant women, and passes on a supernatural curse that will see them punish all samurai. This opening is so beautifully shot that it merit’s a paragraph to itself. It illustrates how tenuous existence is in this period, and how violence and death can literally walk out of the woods one bright sunny morning. Importantly it is extremely tastefully done, which somehow makes the indignity of the events even more harrowing. This harshness of life leaves an imprint throughout the film as it moves into a very stately and formally sophisticated nocturnal realm of the supernatural.

Shindo reveals his strategy with the repetition of scenes which illustrate the manner in which the two cursed women lure samurai to their suitably eerie residence. These sequences are infused with the traditions of both Noh and Kabuki theatre. The former is signified by the Mother (Nobuko Otowa) and her elaborate and slow dance moves, and the latter by the impressively staged scenes in which the ghostly women spin and weave in mid-air, held up by invisible wires. The beauty of the daughter in law (Kiwako Taichi) and the promise of sake begins the supernatural ritual which climaxes with an act of shocking vampirism. At this point the film appears to be meandering to a dead end, but Shindo pulls of an excellent plot twist when the two cursed ghost women must contend with the return of their prodigal son and husband - a man who left them years before as an impoverished farmer and returns as a samurai war hero -  his proof, the decapitated head of a warrior he defeats in combat. Gintoki (Kichiemon Nakamura) embodies the essential statement of the film which suggests that elevation in social status to the rank of samurai leads to emotional hollowness and the artificiality of material gain. This is contrasted with a simple life of the peasant farmer which connotes integrity, moral strength and honour. In this sense Kuroneko has a leftist message, and calls for a form of social revolution - in this society upheaval is required to displace the flabby and self satisfied social leaders.

This attitude is given symbolic resonance by the image of the cat. The film is loosely based on a Japanese folktale entitled The Cat’s Revenge. The cat both possesses a fascination from a supernatural perspective, and also signifies low social status. The two women are given feline features, and one great moment sees the hair of the daughter in law move to and fro like a cat’s tail. The final reckoning between Gintoki and his loved ones sees the samurai choose duty and honour, despite the fact that his wife sacrifices herself to consummate her love. Gintoki’s loss of identity is completed by the vanquishing of the spirits, a loss which began the moment he left the safety of the farm for the landscape of war. Rarely seen in the west, Eureka’s Masters of Cinema DVD is a rare treat for enthusiasts of Japanese cinema.
© Shaun Anderson - 2010
Posted by Shaun Anderson [The Celluloid Highway] at 21:42