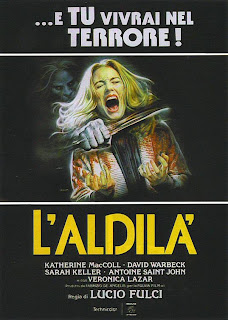 Country: ITALY
aka:
E tu vivrai nel terrore - L'aldila
Seven Doors of Death
Lucio Fulci’s The Beyond is a frustratingly divisive horror movie. It represents everything that is both good and bad about the horror genre. Part of the appeal of horror movies (to less talented writers at least) is that the plotting and characterisation can take a back seat to the stylistic creation of terror and suspense. It is perhaps the only genre that can entirely do away with linearity, cause and effect, logical character arcs, and still make some kind of sense. The purpose may not necessarily be to tell a story, but to create a physical and emotional response. If a horror film can achieve this (depressingly few do), then it has at least succeeded on one level. The Beyond works extremely well on this level. Critics of the film are right to dismiss it as senseless, irrational, and absurd. But it is vital that those who attack the film recognise that, partially at least, this film is a roaring success. But The Beyond is also not the masterpiece some horror fans would have you believe. The Beyond is one of several films appropriated by those with an agenda too acclaim Lucio Fulci is an auteur, something that is truly absurd. The reality is that this movie is both a great horror film and meaningless trash. 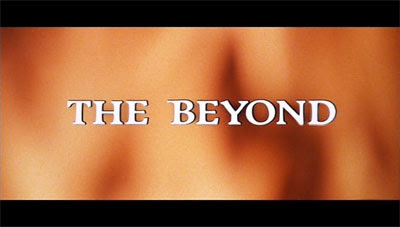 The film opens with a strikingly mounted prologue atmospherically shot in saturated sepia tones. The setting is an eerie and fog enshrouded hotel in late 1920’s Louisiana. A hollow eyed artist by the name of Schweik (Antoine-Saint John) works with feverish intensity on a portrait of an inhospitable and hellish wasteland in Room 36 of the Seven Doors Hotel. Unbeknownst to the obsessed artisan a posse of hard faced superstitious locals believe him to be a warlock and are on the way to mete out their own brand of brutal vigilantism. What follows is the type of harrowing torture set piece for which Fulci would become notorious. Schweik is chain whipped, nailed to the wall, and eventually doused in corrosive quick lime. This vicious and unexpected sequence echoes a similar chain whipping in Fulci’s earlier Don’t Torture a Duckling (1972) and is made all the more distressing by the lack of explanation offered by the artists tormentors. It sets the film on an unrelentingly grisly path and is a fitting way for Fulci to set out his stall. Although the model work is highly unconvincing, the lingering and unflinching gaze of the camera as it picks out torturous details is both nauseating and compelling.

The plot inconsistencies really begin to build when the action switches to the same locale in 1981. We are swiftly introduced to Liza Merril (Catriona MacColl) a New Yorker who has inherited the dilapidated hotel from an obscure relative. In her attempts to renovate the decaying building a number of perplexing tragedies occur; a painter falls to his death from a scaffold, and a plumber vanishes in the flooded basement. It turns out the basement is inconveniently situated on one of the seven gateways to hell - a fact that assassinated artist Schweik was only too aware of. As the film lumbers along, this outlandish dimension begins to bleed into Liza’s reality. One particularly notable side effect of this is that the recently dead return to life. Aided by a resourceful doctor (David Warbeck) and with portentous proclamations from a mysterious blind girl (Cinzia Monreale) Liza watches on with impotent horror as her world unravels.

By the time we finally get to the secret at the black heart of the Seven Doors Hotel, the bonkers screenplay by Dardano Sacchetti, Giorgio Maurizio and Lucio Fulci has generated an hallucinogenic atmosphere from the nightmare depths of a twisted soul. Events lack any kind of discernible logic (this sometimes works, and sometimes doesn’t), and characters behave in inconsistent ways and deliver bizarre lines of dialogue that make no sense. The editing by Vincenzo Tomassi progressively distorts time and Fulci’s compositions constrict space. This creates a palpable sense of dislocation and confusion, which is exacerbated by a number of wholly exaggerated set pieces that exist far beyond their narrative justification. The most eccentric a scene in a library in which an architect discovers the secret of the hotel and is devoured by a hungry troupe of tarantula’s who appear out of nowhere and vanish in the same way. The scene would be laughable were it not for the revolting sound effects.

Other elements of the film are more predictable - scenes of eye trauma (one character has her eye poked out by a rusty nail in a chilling echo of the notorious splinter in the eye scene from the far superior Zombi 2), the rampant clichés of gothic horror, and the hackneyed but still impressive synthesised soundscapes of Fabio Frizzi. Other layers of atmosphere are borrowed from the feverish cosmic horrors of H. P. Lovecraft - the Book of Eibon is a clear stand in for the fabled Necronomicon - and a parallel dimension to our own harbouring unspeakable abominated monsters resonates with the Cthulu Mythos stories. Endless shots of zombies shuffling around hospital corridors waiting to be picked off feel tacked on and are directed with such a singular lack of inspiration that they feel as though they have been spliced in from another movie. Fulci is on much firmer ground when his camera prowls menacingly though the rooms of the Seven Doors Hotel. The Beyond’s challenge lies in its seamless marriage of gothic horror conventions and the surreal. It is not the horror masterpiece supporters of Fulci may have you believe, but it is an excellent example of how unique and idiosyncratic Italian horror could be.
© Shaun Anderson 2010
Posted by Shaun Anderson [The Celluloid Highway] at 20:13