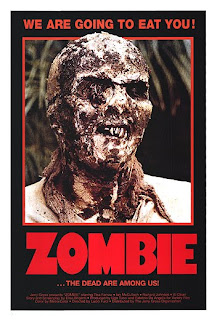 Country: ITALY
aka:
Zombie Flesh Eaters
Island of the Flesh Eaters
Island of the Living Dead
Woodoo
Zombie
Zombie 2: The Dead are Among Us
Over the years a lot of extraneous and superfluous baggage has attached itself to this low budget Italian horror production. It is a film that has always had a whiff of the taboo about it, its murky position in horror history assured as much by extra-textual events surrounding the film as it is by the merits of the film (of which there are many). Its production and release in Italy in 1979 was marred by legal controversy due to the efforts of producers Fabrizio De Angelis and Ugo Tucci’s to market the film as a sequel to George A. Romero’s hugely successful Dawn of the Dead (1978 - released under the title Zombi in Italy and certain other European countries). This was something which particularly aggravated Dario Argento who as co-producer of Romero’s film oversaw its dissemination in Europe. The film managed to overcome this first obstacle and went on to become an enormous commercial success in Europe and America.

A few years later however Zombi 2 would once again find itself the subject of unwanted attention - this time in the United Kingdom, when it was released on video under the title Zombie Flesh Eaters. After becoming one of the first video rental hit’s the film was soon castigated and demonised by a right wing and conservative press and hung out to dry as a Video Nasty. These two events have often led to the films dismissal - either as a cheap imitation of Dawn of the Dead or as an irredeemable example of everything morally wrong with the horror genre. Fortunately in more enlightened times Zombi 2 has slowly begun to recuperate its position within the generic fold (thanks in large part to the rise of Lucio Fulci as a director of some prominence in the field). It can now be enjoyed as a taut and tightly paced grisly shocker which supersedes and improves upon Romero’s ponderous and flabby Dawn of the Dead. Instead of the juvenile and pompous allegorising of Romero’s film Zombi 2 is a rip roaring bloodbath that is economically plotted and devoid of the dull social pretensions that makes Romero’s Dead series seem increasingly po-faced.

The fact that veteran filmmaker Lucio Fulci was hired to direct the film is indication enough that the producers were after a man adept at churning out generic product. The film steeps itself in the history and traditions of zombie folklore at a time when it was quite unpopular to do so. Voodoo is a critical element as are the faint sounds of the tribal drums that haunt the westerners on the barren island - in this respect the film is a much closer cousin to I Walked with a Zombie (1943) than Dawn of the Dead (a film totally dismissive of zombie traditions). It also manages to distil within its form a number of the exploitation currents that were popular in 70’s Italian cinema. It has more than a dash of the exotic travelogue/tourism theme seen in gialli, it has scenes of cannibalism, of course zombies, but also the imperious and scientific gaze of the mondo movie. Believe it or not this was Fulci’s first out and out horror film and we see a director who is respectful of generic conventions, but also willing to offer some experimentation and fun. One only need to look at the astonishing scene featuring an underwater battle between zombie and shark to see the bizarre touches of the surreal invested in the film. The film overflows with a black and sardonic humour as the indelible stamp of Fulci is placed on certain scenes. 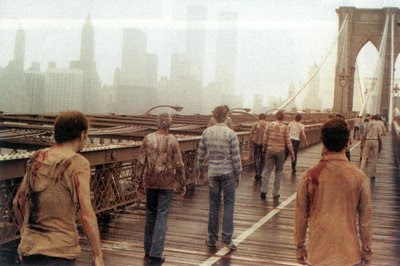 The opening sequence is a textbook example of low budget film making Fulci style. Illegally shot around Staten Island, Fulci uses handheld cameras to a create a sense of imbalance and nausea which is then fully realised by the appearance of a truly monstrous zombie who clearly still has an appetite. This is one in a long line of brilliant set pieces that make the film extremely memorable. Much of the atmospheric resonance is created through a plodding synthesised score by Fabio Frizzi (among his best work). The deep electronic notes of the main theme (a theme which becomes a leitmotif) captures both a sense of the primordial and of the slow shuffling march of the undead. Only on occasion does Frizzi fumble the ball musically (a dreadful reggae calypso theme for example) in a film which sees the soundtrack work unusually well with the images. The real marvel of the film of course (and the reason for its Video Nasty status) are the incredible special make up effects. Effects achieved on a tenth of the budge of Dawn of the Dead (itself a very low budget film). 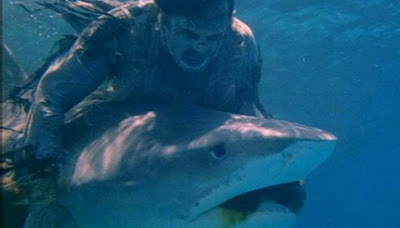 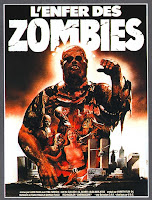 The sickly blue and grey faces of Romero’s zombies give way here to a cadaverous vision of suppurating flesh, of partially rotting and skeletal corpses, of maggot infested eye sockets and shattered limbs. In the films stand out moment (though it is very hard to choose just one) we even get a subjective shot from a zombie as it claws its way out of the earth! The gory effects set a new precedent for the horror genre and in the films most notorious moment are quite literally eye popping. On the back of this film Fulci would embark on a fractious but creatively successful partnership with De Angelis and contribute some of the most surreal, challenging, and unique films to the horror genre. Here Fulci shows what he could do with a straightforward and linear narrative and the result represents a high watermark in Italian horror cinema.
© Shaun Anderson 2010
Posted by Shaun Anderson [The Celluloid Highway] at 20:34