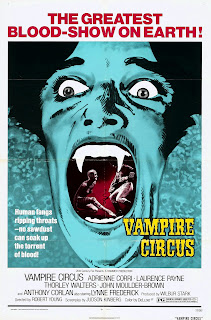 
Thanks to the efforts of the DVD distributor Synapse Films Vampire Circus (1972) became the second Hammer film to be released in the High Definition Blu Ray format. It joins Paranoiac (1963) which was released on Blu Ray last year by Eureka Entertainment. These are unlikely titles perhaps, but Vampire Circus has over the years built itself a steady cult following, largely based on its unusual and offbeat approach to the clichés of gothic horror. By 1972 Hammer were willing to take greater risks in order to reverse their fading fortunes, and although Vampire Circus has plenty of conventional and predictable moments, it also possesses a sensibility, structure, and tone that makes it a unique entry in Hammer’s vampire lore. It is not an experimental film as such - but perhaps the relative inexperience of key personnel such as the director Robert Young (this was his second film) and the screenwriter Judson Kinberg (this was his first screenplay) and the producer Wilbur Stark (who had never produced a horror film before) led to a freshness of approach that accidentally created moments of peculiarity that at times border the modes of art cinema narration. However this isn’t entirely a fresh slate - the name of George Baxt as an uncredited contributor to the story is an important one. Baxt had a long history in the genre - providing uncredited additional dialogue for The Revenge of Frankenstein (1958), and screenplays for City of the Dead (1960), and Circus of Horrors (1960). In front of the camera we do at least have Thorley Walters and Dave Prowse to offer a link to past Hammer's. 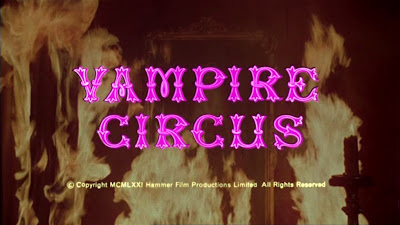 Vampire Circus opens with a highly unconventional pre-title sequence that lasts an impressive twelve minutes. Within this prologue is enough detail for a film in itself. This sequence which depicts the fall of the vampire aristocrat Count Mitterhaus (Robert Tayman) at the hands of the patriarchs of the village of Schtetel would normally conclude a Hammer film. Instead we have an unsettling imbalance to the standard progress of a gothic horror film, and some disturbingly original touches. Mitterhaus first lays claim to an infant girl, the manner in which his eyes gaze upon her, and the way he lovingly fondles her hair adds a surprising undertone of paedophilia. A sex scene soon follows which seems to confirm the aberrance of Mitterhaus, and makes the connection between sex and death explicit. Hammer had always traditionally implied this, but Vampire Circus is a film that dispenses with implications in favour of direct confrontation. Mitterhaus is also brilliantly agile and physical and effortlessly despatches numerous villagers before he is blindsided with a stake by Professor Mueller (Laurence Payne) a cuckold who has endured the humiliation of seeing his wife Anna fall at the Count’s feet. The prologue concludes with a laughably delivered curse and the promise of vengeance, and the brutal whipping of Anna who appears to perish in the flames of the Mitterhaus estate. The whipping is a key scene here, because it suggests that Anna’s infidelity is the greatest crime (the dead child is rapidly forgotten) as the men salve the blow to their combined masculinity by punishing Mueller’s wife. The remainder of the film details the manner in which Mitterhaus exacts his revenge. Having rid their village of the pestilence of vampirism, Schtetel is now breaking under the devastating strain of a virulent plague. The surrounding villages offer no support, but instead patrol the borders ready to fire on any inhabitants who try to escape the quarantine zone. This gives the film an odd and eerie atmosphere, which is soon enhanced by the miraculous arrival of the ‘Circus of Night’s’. The atmosphere of plague and desperation, the looming spectre of death, contrasted with the frivolity of carnivalesque performance is oddly reminiscent of Ingmar Bergman’s The Seventh Seal (1957). I don’t think this is accidental at all, the story is enthused with modes of address more common in art films. The film lacks a lead protagonist, motivations are shrouded in mystery and secrecy, and a gallery of grotesque characters flit in and out of what is an hallucinatory and dream-like narrative. The circus benefits tremendously from its highly charged and pervasive mood of supernatural eroticism. A particular highlight is the tiger woman who battles her whip wielding trainer and achieves an orgasmic epiphany that leaves the watching patriarchs hot under the collar. The connection between beast and man is fruitfully explored, and the transformation sequences while cheaply done are effective in their simplicity. The circus possesses a sensuality of evil which is brought wonderfully to live by the dark sexuality of Emil (Anthony Higgins) and the controlling matriarch played by Adrienne Corri. 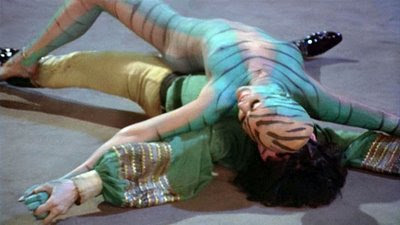 The revelation that the ‘Circus of Night’s’ is the tool by which Mitterhaus will enact his vengeance is not a surprise to the audience. The result is that Vampire Circus has absolutely no suspense at all. But it makes up for this with an unsettling interest in the destruction of childhood innocence. The hall of mirrors acts as a conduit into the realm of the vampire and several children are lured to their deaths by the teasing acrobatic twins (one of which is played by the gorgeous Lalla Ward). The film does suffer from a sense of incompleteness - some of the visual effects are very poor, and the story reaches a point where it loses patience and rushes headlong into a bloodbath in the Mitterhaus crypt. This finale is surprisingly nihilistic with corpses strewn hither and thither, and Mitterhaus himself only enjoys a few seconds of resurrected life before he is decapitated. The oddness of Vampire Circus will always assure it a certain amount of curiosity value, and while it is not a personal favourite of this reviewer, one has to admire the unique approach to the material from the filmmakers involved.
© Shaun Anderson 2011
Posted by Shaun Anderson [The Celluloid Highway] at 16:39