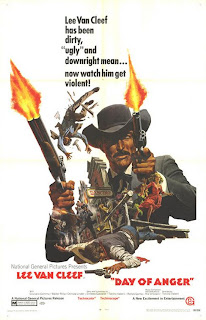 
With his cold steely eyes, predatory angular features, and icy determinism Lee Van Cleef cuts an apocalyptic swathe through the dust and disharmony of the Euro-Western. Van Cleef possesses an aura and a smile that would have coffin makers rubbing their hands in glee. More than any other actor Van Cleef embodied the feral cynicism of this distinctly European vision of the American west. It is only appropriate that the breakdown in distinctions of good and evil should coalesce around an actor that was adept at playing both roles and everything in between. In the remarkable and quite brilliant Day of Anger Van Cleef is given the opportunity to explore the full range of this territory. His expert gunslinger Frank Talby is slick and ruthless and possessed of a burning intelligence and ambition. Talby represents a kind of justice, but the justice he metes out to the corrupt leaders of Clifton, Arizona is poetic, and not at all motivated by an innate sense of moral justice. In reality Talby is entirely interested in feathering his own nest, making plenty of money, and eventually taking control of Clifton. He does this through a combination of guile, gunfire and blackmail. When Talby takes Scott Mary (Giuliano Gemma) under his wing early in the film we are deceived into believing Talby is a good man outraged by the disrespect and injustice Scott endures, but this is a spaghetti western and Talby’s motives turn out to be selfish and self serving. 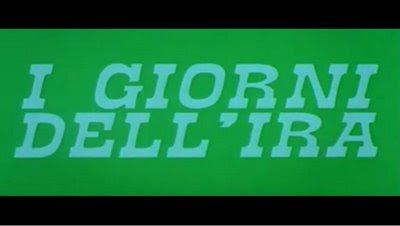 In contrast to the implacable and calculating Van Cleef, Giuliano Gemma wears his heart on his sleeve. Every slight and humiliation his character Scott endures his written over his face. We first see Scott on his daily rounds; cleaning out toilets, sweeping floors, having the fact that he is fatherless rubbed continuously in his face. Certain members of the Clifton community delight in reminding him of his bastard status and treat him like the shit he collects in his buckets every morning. Gemma is the emotional core of this film, and he brings with him an energy and athleticism that would serve him well in numerous spaghetti westerns. Talby is the only character to show him kindness and respect (in fact Talby shoots a man dead for objecting to Scott drinking with him in the saloon) and soon after Day of Anger takes on the familiar theme of the teacher/student relationship. The material is handled differently because of Scott’s childish naivety. Talby delivers harsh lessons, which includes allowing a scumbag to beat Scott to a pulp. But beneath an idiotic and comedic exterior Scott is filing away every lesson. There is a tension here because Talby is not a conventional teacher. Instead of offering a lesson or piece of advice to avoid a mistake, Talby delights in watching Scott make his errors, before offering his precious pearls of wisdom. Even at moments of intense gratitude there is the sense that this is a friendship based on mutual convenience, and when one of them becomes inconvenient it will soon be dissolved. 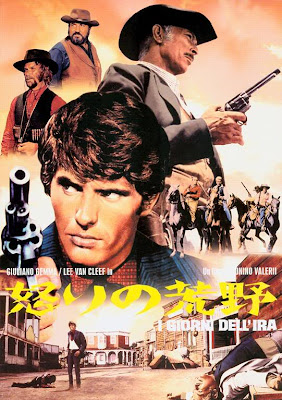 When Talby begins blackmailing his way to control of Clifton, Scott is allowed his opportunity to return some of the vitriol he experienced. His skill with a gun makes him an exceptional member of the community, and grudging respect is afforded him because of his ability to draw fast and kill those who threaten Talby’s bids for dominion. The ultimate lesson that Scott learns is that he is nothing without a gun, the moment a spectre of death and violence clings to him his standing in the community increases. Only those without the power to make life and death decisions are exploited in this world. One of the highlights of the film is the arrival of a mysterious assassin who challenges Talby to a duel on horseback with front loading rifles. This moment of operatic excess is directed sublimely by Tonino Valerii whose use of the close, medium, and long shot in this set piece is alongside anything achieved in Sergio Leone’s westerns. Talby is never less than sadistic when dealing with those that threaten his plans. Perhaps the most shocking example is when he leaves the corrupt owner of a saloon to perish in a fire, only to then build a new saloon on the ashes of the old one. 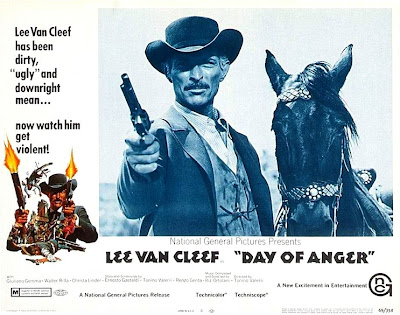 The relationship between Scott and Talby never reaches that of surrogate father and son. Talby’s best laid plans are undone by a series of errors made due to his own vanity and his own greed for power and material gain. The film is clear in its statement about the corrupting nature of power, even those who are innocent are dragged into its whirlpool of deceit and skulduggery. It is inevitable that Talby and Scott will face each other in a duel, and what makes Day of Anger particularly intriguing is that the outcome of this standoff is not predictable or assured. This Italian/West German co-production was shot in the arid climes of Spain and DOP Enzo Serafin captures the stifling heat and unremitting brutality of the choking landscape in a way which shows the negative effects such a bleak backdrop could have on the minds of men. This wouldn’t be a great spaghetti western if it didn’t have an awesome soundtrack, and Riz Ortolani is on hand to provide one of the best scores of his career. Day of Anger remains in the perplexing position of a distribution limbo (it was legitimately released on DVD in 2002, but has since been deleted) and this is a travesty that needs addressing because Valerii’s film is among the twenty best spaghetti westerns ever released.