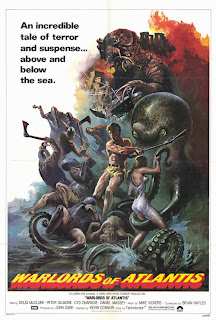 AKA:
Warlords of the Deep


The inconsistent and uneven Warlords of Atlantis was the fourth and final collaboration between producer John Dark, director Kevin Connor, and square jawed actor Doug McClure. The first three period set fantasy adventures The Land that Time Forgot (1975), At the Earth’s Core (1976) and The People that Time Forgot (1977) were all produced under the auspices of Amicus Productions and were based on works by Edgar Rice Burroughs. Warlords of Atlantis broke with this tradition in both its means of production and its writing. The screenplay was concocted by Brian Hayles who spent most of his career writing for British television. He contributed six serials to Doctor Who (The Celestial Toymaker, The Smugglers, The Ice Warriors, The Seeds of Death, The Curse of Peladon and The Monster of Peladon) and many of these adventures had strong socio-political allegorical undertones, this narrative dimension bleeds into the screenplay for this film. Hayles’ screenplay emphasises action over plotting and character development, and the result is energy and excitement at the cost of effective storytelling. The film also differs in its stress on science-fictional elements and in its interest in the future of mankind. However Warlords of Atlantis still celebrates unlikely feats of engineering and places its trust and support in the unshakeable symbol of the eccentric Victorian scientist. The result is a film that maintains the iconography of the Amicus pictures, but develops a series of themes that offer an altogether darker vision than that presented in the earlier films. 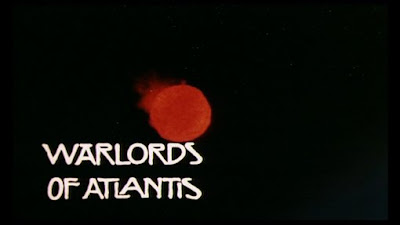 One of the major themes of Warlords of Atlantis is deception. The crew and captain of the ship The Texas Rose have been chartered by the aged Professor Aitken (Donald Bissett), his son Charles (Peter Gilmore) and engineer Greg Collinson (Doug McClure) on an expedition to dangerous waters. The crew are left totally in the dark as to the true intentions of the scientists, and more surprisingly so has Collinson, who has no idea that the truth behind the venture is the discovery of the lost city of Atlantis. The search involves plumbing the depths of the ocean in a rather unconvincing diving bell. The arrival of a giant squid intent on reclaiming a golden statue spins the intrepid adventures into a whirlpool that leads to the fabled underwater world. Once in Atlantis we discover a clearly demarcated social order led by the super intelligent Atlanteans (in reality an alien race) and the slaves that toil in the heat (some of which are the crew from the Marie Celeste). The Atlanteans in the finery of their robes and silly haircuts are only interested in intellect and are determined to convince Charles that his intelligence can be used to alter the future of mankind. Those whose brains are less than worthy are little more than irritations and are fit only for slavery and death. It goes without saying that Mr. McClure is among this category. The social implications of this set up from Hayles are impossible to miss, and if we hadn’t already got it, his screenplay elects to literalise his fascist allegory with a vision of the future under the rule of the Atlanteans. 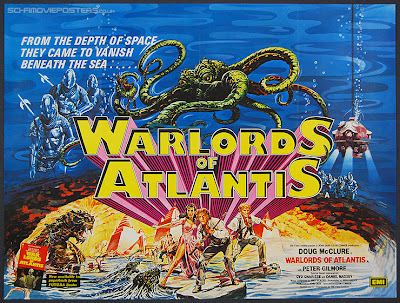 This layer of prophecy and precognition expands the temporal remit of the film in a way which the others did not. Warlords of Atlantis looks to the future, and the world we see is one of jackbooted Nazi’s and the devastation of World War Two. But the motives of these alien fascists is somewhat obscured by this imagery. It would seem they wish to both escape the Earth, and to map out its future for posterity. What is interesting is that when Charles witnesses this future vision he is not initially repulsed by the impending rise of a totalitarian regime, in fact he is open to discussion. His hubris and vanity has been piqued by the Atlanteans’ assessment of his intellect, and with them he sees an opportunity to express his will for what he believes would be the good of mankind. For just the briefest moment we get a hint of how pride can cloud morality. The no nonsense practicality and fists of McClure are fortunately at hand to sweep aside these dilemma’s as the men attempt to make their escape from the walls of Atlantis. The manner in which they do is rather easy. Apart from a few unimpressive and stodgy monsters which can barely move, their main threat is the preposterously attired Atmir played by a very embarrassed looking Michael Gothard. Gothard’s descent into low class and low budget mediocrity in the wake of his startling performance in Herostratus (1970)remains one of the most perplexing misuses of a career in film history. 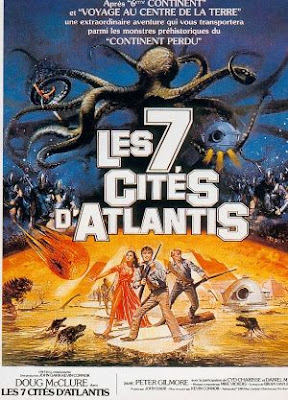 The film allows one more moment of totally unnecessary deception aboard The Texas Rose, a final coda that drags the film on for ten more minutes than it needs. The film benefits from a series of solid and charming performances which become all the more important in light of the unusually poor matte painted backdrops and model work. The four McClure/Connors British fantasy films are never less than fun, even if this particular entry feels like the slightest of the lot. Warlords of Atlantis deserves a little more credit because it is an original screenplay concept that manages to retain the spirit of Burroughs’s adventures whilst developing some original touches of its own.
© Shaun Anderson 2011
Posted by Shaun Anderson [The Celluloid Highway] at 17:03