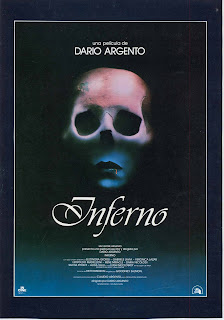 Country: ITALY
If Dario Argento’s hyperbolic and hallucinatory shocker Suspiria (1977) was the Italian’s attempt to represent on screen the sensation and atmosphere of a nightmare then his second film too explore the mythical Three Mothers Inferno is an eccentric enigma wrapped inside a nightmare. Although the storyline of Inferno can be followed reasonably enough the film itself has an illogical internal structure that makes it unique in the filmography of Argento. It is the only horror film of Argento’s that at times drifts into the experimental territory of the avant-garde. It could be argued that Inferno is a nonsensical muddle, an example of how Argento’s writing became increasingly fragmented and prone to trite and stilted dialogue, but as a visual experience the film is a fascinating journey into a different sphere of understanding. Argento attempts to expand the baleful and malignant influence of the Three Mothers by locating the action in both Rome and New York. One visual error Argento makes is to represent both locations with a similar colour palette. He succeeds along with his DOP Romano Albini in making both settings suitably mysterious and frightening but the similarity of Rome and New York and the frequent cross-cutting between the two can create a sense of temporal and spatial confusion. The startling use of reds, greens, blues and yellows is carried over from Suspiria, but without the depth and richness that came with the Technicolor cinematography of the previous film. Although Argento is clearly aiming for temporal and spatial imbalance to aid his nightmare aesthetic for an audience it can be a little frustrating. At times Inferno is an irritating film. 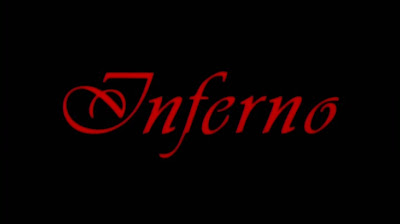 However one must commend Argento’s bravery in his total commitment to the irrationality of his vision. It must be remembered that there were significant commercial ambitions for Inferno in the US with 20th Century Fox themselves handling its distribution in the States. Therefore Argento’s unwillingness to follow a strictly commercial path deserves credit. This irrationality includes a number of striking (but senseless) set pieces that in the best Italian horror fashion last far beyond their narrative justification. The two that spring most readily to mind are an encounter between a wide eyed female student and a demonic alchemist in the basement of a Rome library - a brilliant scene but the plot contrivances that have to build up to make this scene possible beggars belief. The other and even more impressive sequence features Irene Miracle (fresh from Midnight Express (1979)) searching for a key in a flooded ballroom full of mouldering corpses. These two sequences offer an insight into the pervasive and global threat of the Three Mothers, but also a link between the modernity of our world (a world admittedly that is fairly unrecognisable) and a mediaeval world of witchcraft and superstition. Alchemy emerges as a major thematic and symbolic motif of Inferno. It is also symbolic of the filmmaking experience itself - after all isn’t Argento and his team of gifted technicians creating a kind of visual alchemy - turning the stuff of nightmares into the celluloid gold of cinematic history.

So visually Inferno is stunning, arguably Argento’s visual masterpiece. The graphic violence of the film (multiple stabbings, eye gouging, and decapitation) provide the requisite thrills for hardcore horror fans (and helped the film get banned in the UK as a Video Nasty). But from the perspective of plot construction the film is a disaster. Everything serves what I term the internal illogic of the film (it could of course just be lousy writing, but I’m willing to give Argento the benefit of the doubt) even the soundtrack which was composed by veteran progressive rocker Keith Emerson. The music lacks synchronisation, is prone to bizarre and awkward tempos, and at times a wildly offbeat time signature. Only during the brilliant scene at the end (which Mario Bava worked on) when we discover the true identity of the creepy nurse do we get the type of rousing music we are accustomed too in Argento’s cinema. The feeling I got whilst watching is that there is scant opportunity for the audience to take things in and to ponder the deeper mysteries and layers of the film. To fully explore the myriad connections (both character and narrative based) that were established in Suspiria and concluded so shabbily in the desultory Mother of Tears (2007) (a film that makes Inferno seem like Citizen Kane) one has to view Inferno multiple times. There is much to admire here, but if you want a single example of where Argento began to give his writing secondary importance to visual presentation then here it is.
﻿© Shaun Anderson 2010
Posted by Shaun Anderson [The Celluloid Highway] at 20:22