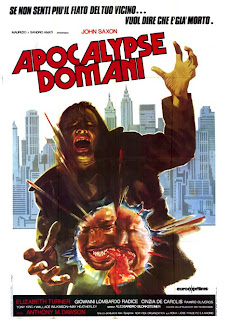 Country: ITALY/SPAIN
AKA:
Cannibals in the Streets
Cannibals in the City
Cannibal Massacre
Invasion of the Flesh Hunters
Italian journeyman filmmaker Antonio Margheriti certainly knows how to churn out a decent genre B movie. Like the majority of directors working in popular Italian cinema during the 1960’s, 70’s and 80’s Margheriti (who often used the nom de plume Anthony M. Dawson) had a high degree of skill in switching genres. He’s pretty much done it all - from Mario Bava inspired gothic horror like Horror Castle (1963) and Castle of Blood (1964) to gialli like Naked You Die (1968) and Seven Deaths in the Cats Eye (1973). Outside the horror genre Margheriti has directed science-fiction, spy adventures, sword and sandal peplum adventures, and war films. It is no surprise then that Cannibal Apocalypse which blends several sub-genres is a very enjoyable, confident, efficient, if somewhat mindless B movie that gives the director the opportunity to hone his skills at shooting action sequences.

The flashback sequence which opens the film immediately highlights that this particular cannibal film is going to be radically different to the jungle adventures of Cannibal Holocaust (1980) and Cannibal Ferox (1981). This sequence is set in Vietnam as Captain Norman Hopper (John Saxon) and his platoon scour the jungle for their imprisoned comrades. The two POW’s Charlie Bukowski (Giovanni Lombarde Radice) and Tom Thompson (Tony King) are so thankful to be released that one of them takes a big bite out of Hoppers arm. Unfortunately their time as Vietnamese POW’s has resulted in them becoming cannibals. The film never adequately explains how this happens, but it doesn’t really matter because we get to see plenty of shooting and the liberal use of a flamethrower. This sequence is marred somewhat by the cheapskate tactic of including library footage from the Vietnam War which is clumsily edited into the film. Visually at least the film gets on a more even keel when the actions shifts to Atlanta, Georgia. Hoppers nightmares are not the only manifestation of a mind troubled about events in Vietnam. The raw meat in his fridge becomes awfully tempting to him, and when seduced by the prick tease girl next door he has a little nibble on her. Meanwhile Bukowski is walking the streets (the film implies a failure in the psychiatric profession, but doesn’t have time to develop this critique) and pretty soon he’s dining on exposed human flesh. It doesn’t take long for the old Vietnam gang to get back together and pretty soon the cannibal contagion is spreading. Its up to seasoned veteran cop Captain McCoy (Wallace Wilkinson) to make the sure the spread is contained.
﻿
This film has more in common with zombie films than cannibal films. The rabies like disease that turns normal people into cannibals is really the disease of returning Vietnam veterans. The film doesn’t make any overt statement about this, but its fairly clear that the problem is the veterans themselves. The film offers no redeeming image of those who fought in the conflict, but instead seeks to emphasise their difference. They are all psychologically scarred by the conflict, but writer Dardano Sachetti goes a step further by suggesting the time spent in Indochina has altered the physical and cellular make up of these people. In this respect Cannibal Apocalypse belongs to a sub-genre of films dealing with returning Vietnam veterans that also includes Coming Home (1978), The Deer Hunter (1978) and First Blood (1982). In the shape of John Saxon the film has a protagonist with genuine pathos who is tortured by both guilt and the realisation of his difference. Radice also puts in a great performance as Bukowski whose demise in the sewers of Atlanta is the most memorable scene in the film. The labyrinthine tunnels and passageways of the sewer system offers an effective metaphor for the strangulating atmosphere of the Vietnam jungle, but just as effective is the urban nightmare of the inner city. This is as much a film about returning veterans failure to readjust to the concrete jungle. What elevates this above much of the product being produced in Italy at the time is the brilliant action scenes and numerous shootouts. Margheriti shows a real flair in his composition of these sequences that is distinctly lacking in the quieter moments of dialogue exchange. Not as gory or as violent as many of its contemporaries Cannibal Apocalypse has nevertheless endured considerable censorship over the years. Misleading title aside this is a solid and entertaining film which has more in common with Hollywood action films than the sadistic cannibal sub-genre which it is often placed in.
﻿© Shaun Anderson 2010
Posted by Shaun Anderson [The Celluloid Highway] at 21:23