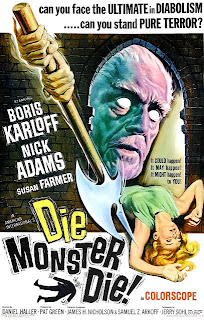 aka:
Monster of Terror


In honour of the birth of H. P. Lovecraft I thought I’d reacquaint myself with one of the earliest film adaptations of his work. Lovecraft has been very badly served by cinema. With the worthy exceptions of Re-Animator (1985) and From Beyond (1986) Lovecraft’s nightmarish vision of cosmic horrors has remained largely unrealised. One of his most evocative and memorable short stories is The Colour Out of Space which Lovecraft wrote in March 1927 and was first printed in the September 1927 edition of Amazing Stories. It has since become one of his most enduring tales. The first thing to say about Jerry Sohl’s screenplay adaptation is that it is very loose. In fact Die, Monster Die! has only a thin resemblance to the story it is based upon. The filmmakers instead are totally intent on recreating the look, feel, and style of the Corman/Poe cycle which was also distributed by American International Pictures. This isn’t much of a surprise when one realises that first time director Daniel Haller had in fact worked on every one of the Poe films as art director. So once again, as was the case with an earlier AIP adaptation of Lovecraft (The Haunted Palace (1963)) Lovecraft is subsumed into filmmaking strategies adopted for the Poe cycle.

The film opens with a bland and featureless hero disembarking from a train at the creepy little English village of Arkham. Sohl opts to retain the name of Lovecraft’s fictional town, but for once an English setting actually detracts from the film. The rural village folk are so rude and uncooperative towards Stephen Reinhart (Nick Adams) that their attitude borders on farcical. After his entreaties of help in getting to the residence of the Witley’s are totally snubbed he sets out on foot. Here Haller’s experience in art direction works wonders. The frame is expansive, and a blackened fire damaged heath is brought to life with impressive matte paintings. On arriving at the typically brooding and haunted looking gothic mansion of the Witley’s, Reinhart encounters all sorts of weird behaviour, most of which emenates from the cryptic waffling of Nahum Witley (Boris Karloff). He spends much of the film in a wheelchair (not a storytelling device, but the reality of his health at the time) and the mystery begins to build up. This is exactly the structure of every Corman/Poe film, and like those films the visual presentation alleviates much of the nonsense going on. Haller possesses an impressive eye for visual expression and composes a number of striking sequences in the isolated setting. The storytelling also has a patience of delivery that is all to rare, if only the mysteries at the heart of this old dark house were actually interesting…or for that matter - mysterious!

Much of the tension in the first half is built around the fact that the inhabitants of the Witley estate should be locked away in a mental asylum. Nahum behaves erratically and irrationally, his disfigured wife Leticia (Freda Jackson) never leaves her room and speaks behind a veil, the butler is virtually a walking cadaver, and a mysterious figure in black stalks the estate. Naturally our heroes Reinhart and Susan Witley (Suzan Farmer) decide it’s a good time to stick around, instead of getting the hell out of there! The film completely loses its subtly built up patience in the first half and becomes a schizophrenic mess in the second. The film rushes headlong into chaos with one plot revelation after another (the second half is only saved by a fun cameo from Patrick Magee as the alcoholic village doctor) and pretty soon the film has lost its pretence toward slow burning atmospherics. The blasted heath was the site of a meteor landing and Witley has been using the cheap looking alien material to grow giant vegetables in his greenhouse. He also has some weird mutants in there caged up! The mutation of his wife is an unfortunate side effect, but a price Witley appears to be willing to pay. Witley is eventually punished for trying to harness the alien technology and becomes an irradiated psychopath - the glowing figure is a striking image, but Witley is all to easily despatched as the mansion is soon engulfed in the predictable flames that seem to conclude most of these films.

Die, Monster Die! is a real missed opportunity, and a major disappointment. Much of the fault I believe lies with a screenplay that is structurally incompetent. Haller manages to emerge from this mess with his reputation in tact. It is no surprise that he was invited by AIP to direct another lacklustre Lovecraft adaptation The Dunwich Horror (1970). The visual presentation, and Boris Karloff’s faultlessly immaculate performance, are the only redeemable aspects of this misguided production. For fans of Lovecraft like myself the decision to totally emulate the Poe films for obvious commercial reasons is one of the most damaging aspects of this film, and an insult to the rich imagery that Lovecraft conjured up. This wouldn’t be quite so bad if the filmmakers had chosen a less prominent story, but The Colour Out of Space is up their with the very best of Lovecraft’s fiction - the result is a juvenile insult to Lovecraft’s legacy.
© Shaun Anderson - 2010
Posted by Shaun Anderson [The Celluloid Highway] at 14:33