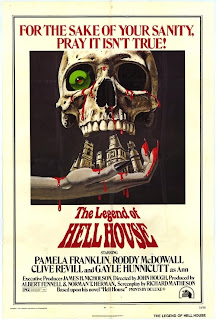 
This somewhat solemn and humourless departure into the splintered realm of the paranormal has stood the test of time exceptionally well. In recent years a lot of haunted house films have been all noise and no intelligence. Just because technology in sound design has reached an apex, that doesn’t mean one should feel duty bound to bombard the audience with an aural discharge that borders on an assault. When modern sound design goes hand in hand with CGI the results are cinematic artificiality on a par with 3D. The Legend of Hell House is a comforting return to an age when creativity was genuinely required in the sound department and where a real set could conjure an atmosphere unlike anything we see today. The blueprint is obviously Robert Wise’s film adaptation of The Haunting (1963). A film that rightfully holds a very prominent place in any discussion of ghostly goings on (or not goings on as the case may be) and although Hell House doesn’t quite reach the brilliance of that earlier film it still achieves a respectability within the form. Richard Matheson’s source material places a greater emphasis on deviant sexuality and past perversion, and plays up in a more aggressive manner the age old dichotomy between rational scientific thought and the irrationality of the psychic world. Matheson’s screenplay tones the novel down, but not to an extent that damages the film.

What is most noticeable now to a modern viewer is the lack of spectacle here. It has an understated and minimal quality which is to be truly admired. With the release of The Exorcist (1973) in the same year this style of filmmaking within the horror genre would increasingly seem outmoded and tame - but there is no doubt in my mind which of the two films is more watchable and enjoyable now - and it isn’t William Friedkin’s masturbatory tribute to the European new wave directors he so desperately wanted to be linked too. Instead the filmmakers here seem intent on creating subtle scares mostly through performance, reducing the physicality that would come to dominate the genre. It doesn’t succeed at all on an intellectual level, but then neither does it insult the audience with petty and ponderous moralising. The film relies almost entirely on the actors and their commitment to the material. As a result of this the special effects are weak and clichéd (airborne crockery, creaking door hinges, slamming doors, ghostly footsteps etc). No doubt budgetary constraints were a concern, but the key aspect of the film they get spot on - the casting. 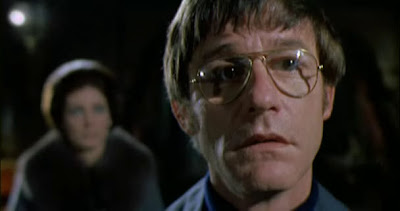 Even the usually manic over-acting of Roddy McDowall is kept in check for the first half of the film. He plays the only survivor of a previous expedition within the terrifying walls of Hell House. His psychic link increases as the film progresses and his agitated mannerisms and quirky performance techniques begin to emerge at a time when the film is just starting to drag its heels. The film benefits tremendously from its single setting, and in its gallery of characters, all of whom have agendas and vulnerabilities. The house itself is a masterpiece of the baroque, with its elaborate and ornate interior decoration, winding stair cases, candelabra and cloistered passageways. The regular establishing shots of the exterior of the house suffused in an ever present mist gives a real sense of isolation. Unfortunately though this also means there is a fair amount of sitting around and talking, and on occasion the film feels laboured and static. 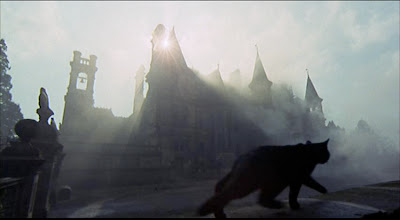 A lack of special effects doesn’t necessarily mean a lack of technical accomplishment - because in its own way this film is just as technically accomplished as anything else being released at the time. The art direction by Robert Jones deserves a special mention, and conveys through the decadence of the design the history of debauchery central to the haunting. The cinematography by Alan Hume is workmanlike, but on occasion highly inventive. A number of low angle shots, photographic distortion and a restricted frame all add to the subtle and encroaching atmosphere. But as alluded to earlier this film is all about its sound design. The efforts of Delia Derbyshire and Brian Hodgson of the BBC Radiophonic Workshop (most famous for its synthesised contributions to Doctor Who in the 1970’s and 80’s) really brings the film to spooky life. Much of the tension and apprehension is created by the weird sounds they conjure up. The director John Hough, who also helmed Hammer’s stylish and enjoyable Twins of Evil (1971), keeps control of a film that could have easily spiralled into chaos. His direction is unobtrusive and continues a trend throughout the film of a downplaying in aesthetics. The only thing that irritated me was the profusion of on screen captions telling us the date and time. The reason for all of the paranormal hullabaloo is incredibly daft and somewhat mars the overall effect. Despite this The Legend of Hell House is a memorable effort by all concerned.
Posted by Shaun Anderson [The Celluloid Highway] at 21:09