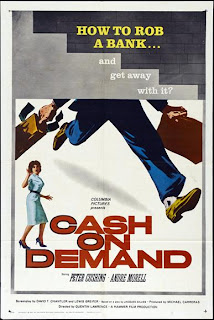 
Cash On Demand is a charming departure from the Mid-European gothic locale for which Hammer were best known. It appeared at a time when producer Michael Carreras was having some success in steering Hammer towards a more diverse range of films and the intention to differentiate this from the popular conception of Hammer is signified by the decision to shoot in black and white. The monochrome cinematography of Arthur Grant is crisp and concise and affords the film a sense of style and atmosphere very different to the gothic horrors -  and the tone of the picture also separates it from the psychological thrillers to which Hammer would give greater attention as the 1960’s progressed. The film marked a return for Hammer to the tactic of adapting a television success - in this case a 1960 episode of Theatre 70 written by Jacques Gillies. With some wisdom Hammer chose to retain Andre Morell from the television show, and in a piece of casting genius pitted him against Peter Cushing. 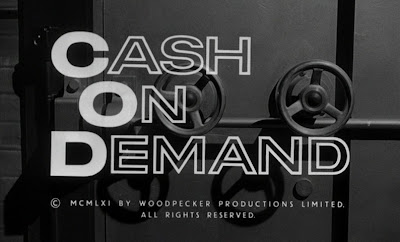 Cushing’s interpretation of the bank manager Fordyce has to be considered one of his finest performances. In his total oblivion to the festive period and his less than charitable attitude to his staff the character and his recuperation at the end evokes Charles Dickens’ A Christmas Carol. Our first sight of Fordyce sees him polishing up the plaque outside the bank and removing his dirty shoes before stepping into the bank. Cushing brings to the role all kinds of tics and mannerisms to build up the officious and fastidious nature of the character. He is constantly adjusting his tie and pursing his lips, gazing at his staff through spectacles in barely disguised contempt. He rules the bank with an iron fist, disapproves of the idea of a staff party, and puts terrible pressure on his put upon number two Pearson (Richard Vernon). Cushing is marvellous and does everything within his repertoire to make Fordyce an overly efficient, stiff, and thoroughly dislikeable management figure, the like of which most of us have encountered in our working lives. 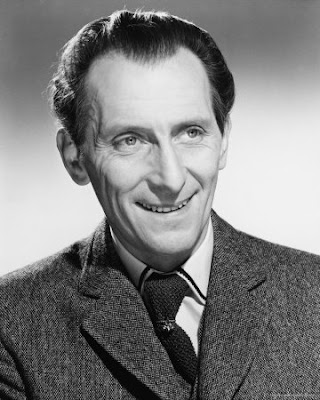 At this point Cash On Demand is a series of petty incidents highlighting in small ways the character of Fordyce, but this is thrown into brilliantly sharp relief by the arrival of gentleman thief Hepburn (Andre Morell) who blackmails Fordyce into assisting in the robbing of his own bank. We soon discover that beneath the icy exterior Fordyce is an incredibly insecure individual who is well aware of his unpopularity and only too self-conscious of the fact that he exists in a hollow and friendless world with only his wife and son for support. Hepburn on the other hand is everything that Fordyce isn’t. He is charming, amusing, cultured and intelligent and in posing as a representative of an insurance company takes an interest in the staff that Fordyce neglects. Their only similarity lies in their meticulousness to detail. Although Fordyce insists that Hepburn is nothing more than a common criminal and has no right to sit in moral judgement, it becomes increasingly clear that Hepburn’s attitude to his fellow man places him on a higher plane to Fordyce. Hepburn is there to steal £97,000 but also to dish out a harsh lesson to the insular and job obsessed Fordyce. He does this by preying on his emotional weaknesses but also by picking apart the network of barriers that Fordyce has constructed in order to keep a distance from his staff. 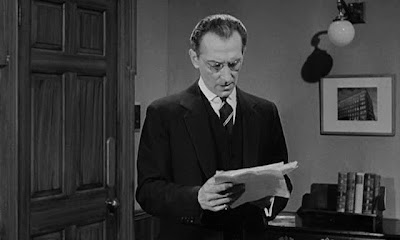 The chemistry between the performers is excellent. Only briefly does Hepburn’s charming exterior falter when he strikes Fordyce for being deceitful. And Cushing really comes into his own when Fordyce is forced to rely on the charity and mercy of the very staff he has mistreated. With just a look in the eyes Cushing communicates beautifully the emotional cost that Fordyce is paying and the surprised gratitude at the unthinking assistance of his staff. The relief is palpable and throughout his ordeal Fordyce seems to shrink to little more than a husk, but on the news that the police have been investigating Hepburn for some time and that his wife and child are unharmed, Fordyce once again assumes an air of quiet authority. But this time it is tempered with a new found awareness for the struggles and needs of his fellow man and an excitement at the prospect of attending the Christmas party to thank the staff that have now become his friends. 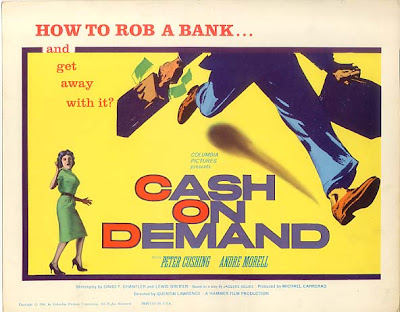 The production design by Bernard Robinson is of particular note. The film is entirely studio bound and the bank setting is well evoked. Fordyce’s office is spacious and uncluttered offering a reflection of the man himself. If there is one criticism of Cash On Demand then it lies in the rather static means of its cinematic expression. This aspect of the adaptation from television to cinema comes across strongly and very few of the cinematic devices utilised in the production of the film add to the overall effect. This is all about performance, delivery, and dialogue. The direction by Quentin Lawrence, who would later go on to direct The Secret of Blood Island (1964) for Hammer is unfussy and efficient which is a perfect for a film devoid of the spectacle most commonly associated with Hammer. Cash On Demand is a delight and is very worthy of the esteem it is now held in and proved yet again that Hammer’s bow had many strings.
Posted by Shaun Anderson [The Celluloid Highway] at 16:08