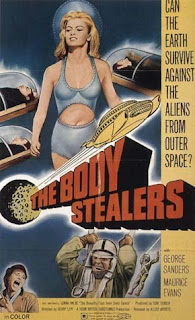 aka:
Thin Air
Out of Thin Air
Invasion of the Body Stealers


The Body Stealers is a painful waste of time, energy, and celluloid. This cinematic excrement was released as part of Anchor Bay’s otherwise decent Tigon Collection in 2005, but as with all box sets it suffers from some substandard fillers. Its status as a filler is perhaps exemplified by the fact that it has taken me five years to get around to actually watching it, and I understood why, as the name Neil Connery appeared on the screen. Watching films and then writing about them is for the majority of the time a pleasure, but every now and then something comes along that is so dreadful that one begins to question whether one is spending their spare time in a constructive manner. Tigon had enjoyed a lot of success at the time with Witchfinder General (1968) and Curse of the Crimson Altar (1968), but for some reason producer Tony Tenser decided there was a need for Tigon to diversify and appeal to a different market - as a result this bastardisation of Invasion of the Body Snatchers (1956), James Bond and Doctor Who surfaced to “thrill” a younger audience in the summer of 1969. Unfortunately for Tigon their attempts to do things outside the horror genre often failed, but that didn’t stop them trying…and trying! 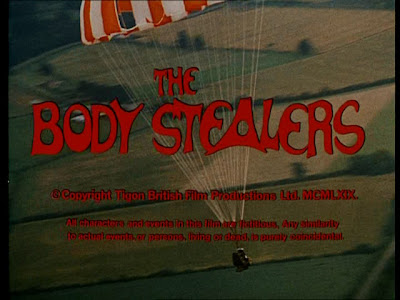 The premise which involves paratroopers vanishing in mid air is intriguing enough I suppose, and the opening scenes dealing with this, set up a scenario which in more confident and intelligent hands might have succeeded. But The Body Stealers, like so much low budget British genre filmmaking, is unable to break free of the shackles of its ultra low budget. The aerial shots which open the film expand the spatial possibillities, but all too soon we find ourselves stuck in non-descript and tackily designed offices, laboratories, and hotel bedrooms. The incompetent military led by General Armstrong (a very bemused looking George Sanders) decide rather swiftly that they are not up to the task of getting to the bottom of the mystery and agree with parachute designer Jim Radford (Neil Connery) to bring an outsider in to clear things up. The outsider in this case is the repugnant Bob Megan (Patrick Allen) a misogynistic dimwit whose primary concern is leaching after women. Although the film lacks the obvious spy elements of Bond Megan’s attitude to women and his brusque attitude to authority figures situates him directly within the Fleming conception of heroism which bled into most genres in the 1960’s. The gimmick casting of Connery reinforces this, but Patrick Allen is totally devoid of the charisma and good looks associated with the Bond style hero. 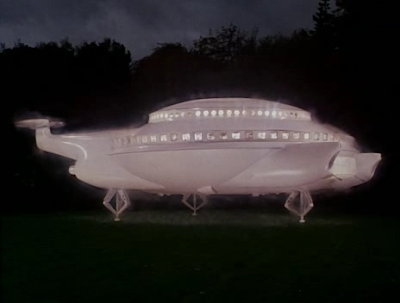 The film suffers from a lot of sitting around and talking, and the detective elements of the plot lack dynamism. This is the type of film which relies on absurd connections and contrivance in order to illuminate what is going on. The film may have been a lot better had the writer Michael St. Clair opted to develop the espionage angle, but this would have totally removed the science-fiction aspects of the plot. The revelation that the paratroopers have been abducted as part of a hair-brained scheme by two (yes just two!) aliens to save their dying planet inspires nothing but contempt for the manner in which the film nakedly panders to the marketplace. We don’t even get the opportunity to see what the aliens really look like, which would have at least provided a laugh. The filmmakers do everything in their power to make The Body Stealers as innocuous and as harmless as possible. The camera constantly cuts away from violence or death, which in a film like this is the only thing to look forward too. 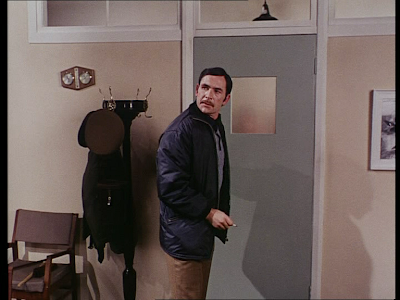 Despite all of these weaknesses producer Tony Tenser managed to somehow assemble a cast of recognisable names. One cannot watch this without feeling eternally sorry for George Sanders and the level to which his career had sunk by this point. Maurice Evans as the body snatched alien leader is similarly wasted. The director Gerry Levy would never again be entrusted with the direction of a film, and on the evidence here, we can be eternally grateful for that. Even the cinematography by John Coquillon is ropey, with the film having a garish look to it. Coquillon had photographed Witchfinder General and would go on to lens other notable horror films including The Oblong Box (1969) and Scream and Scream Again (1970) before reaching greater prominence working with Sam Peckinpah. His talents are clearly wasted here, but the one man who was perfect for such a celluloid travesty was Neil Connery. He might have enjoyed his experience making this film, but I certainly didn’t enjoy mine watching it.
Posted by Shaun Anderson [The Celluloid Highway] at 16:06