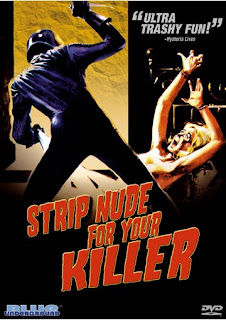 
As the title might suggest Strip Nude For Your Killer is not the most sophisticated and intellectual of cinematic experiences. This is the Italian giallo at its least auspicious and most self-consciously exploitative. This is the flip side to the formal style and elegance of Dario Argento, Mario Bava…and even Lucio Fulci! In this case the visual style takes a complete back seat to gratuitous nudity and perverted sexual antics. There is of course nothing wrong with this - but for the fact director Andrea Bianchi assembled such an ugly and repugnant cast. Bianchi makes a few feeble and perfunctory nods to formal conventions with the occasional use of an intriguing colour scheme, the boring repetition of the zoom lens, and the odd interesting use of point of view shots. If this film fails aesthetically it more than makes up for this in its camp credentials. A tongue in cheek attitude to sexuality (bordering on offensive) goes hand in hand with an array of wild set designs and the usual assortment of eye watering costumes. Photography and fashion is a key preoccupation of the film. The plot centres around a chic fashion house which seems to have been included as a plot point merely for the purpose of exploring the nudity that Bianchi seems to have a fetish for. 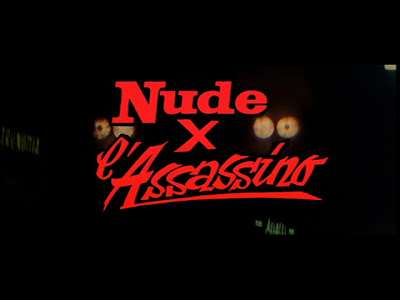 At the level of characterisation this film is a dismal and depressing failure. The characters (almost without exception) are vile and nauseating and deserve the fates meted out to them. Our amateur detective protagonist Carlo (Nino Castelnuovo) is a man with no redeeming qualities and Castelnuovo is an actor utterly devoid of even a token screen presence. He has no charm, is incredibly stupid, and by rights deserved to die an incredibly agonising death, but Bianchi’s hopeless story celebrates these qualities and allows the character to survive. Carlo ends the film with a promise of forced sodomy for his lover , telling us a lot about what constitutes heroism in the eyes of Bianchi. This wouldn’t be so bad, were it not for the fact that Bianchi extends this grotesquery to every character in the film, with the slight exception of Magda (Edwige Fenech). I say slight exception because she at least appears to be a sympathetic character with a level of understanding. I credit Fenech for this, because its clear from the outset what Bianchi sees as the purpose of the character - her first act is to strip off and perform oral sex on the sleaze bag Carlo. If the film has any cult credentials then they lie with both the title of the film and the casting of Fenech. She has become a figure of semi-worship for many a (usually middle aged) fan of European exploitation cinema. However her look in this film does absolutely nothing for me - her androgynous looks inspiring revulsion rather than excitement.

The mystery (such as it is) revolves around a botched abortion. One might imagine that Bianchi is about to embark on a subtle study of this controversial subject, but this is a plot point that seems to have been included for the express purpose of opening the film with a shot of a naked women with her legs spread. Admittedly few films begin with such an arresting image, and Bianchi peppers the narrative with a number of interesting subliminal shots of her corpse in a bathtub, but the motive behind the fashion house slaughter seems tangential to the original tragedy. The assailant is distinctively attired in motorcycle leathers which conceals the identity and gender of the killer. The latter is important because Bianchi has obviously seen Bird with the Crystal Plumage (1970) and copies the gender twist seen in Argento’s far superior film. Unfortunately by this point in the proceedings I didn’t really give a toss about the identity or the gender of the killer so it didn’t really work for me, but I’m sure Bianchi thought it was extremely clever. The most unforgivable thing Bianchi does however is to write and direct a gialli that is completely lacking in suspense. For the exploitation elements one has to concede that Bianchi succeeds admirably. But the most successful and memorable examples of the genre are those that manage to combine the violence, nudity, and exploitation devices with an understandable plot, an impressive visual style and at least one or two well mounted and suspenseful set pieces. Strip Nude For Your Killer only really possesses one of these ingredients, which is why I deem it a failure. 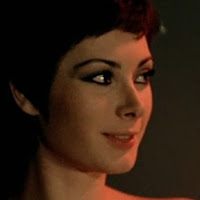 Bianchi would never again set foot in the camp and cosmopolitan terrain of the giallo. The reasons for this are very clear if you have the misfortune to sit through this film. The promise of his debut film, the underrated psychological thriller Night Hair Child (1972), would ultimately remain unfulfilled. For some reason Bianchi was unable to resist the pull of trash and sleaze and his debut film would become an aberration in a career littered with low grade garbage. There is certainly enough in his debut film to suggest that Bianchi could have had an interesting career in a subtle and atmospheric brand of chilling horror, but as it turned out he would put his intellect to such incomprehensible and incompetent dross like Nights of Terror (1981) - a film which in its utter stupidity manages to make Strip Nude For Your Killer seem half decent. By the standards of other gialli that saw the light of day in the 1970’s this is forgettable garbage.
Posted by Shaun Anderson [The Celluloid Highway] at 20:38