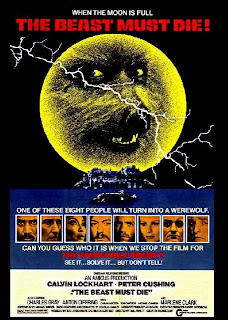 
This utterly daft, but oddly endearing low budget horror flick saw Amicus Productions once again attempting (unsuccessfully) to conquer the single narrative feature film. As a story this is a complete nonsense but The Beast Must Die has the peculiar charm and characteristics of the cult film. An almost indefinable appeal, but one which has nevertheless seen this film remembered fondly. At the time it was heavily criticised for its gimmick of having a ‘werewolf break’ to allow the audience to decide which of Tom Newcliffe’s (Calvin Lockhart) guests is in fact a ravening lycanthrope. But this is precisely the type of detail which now aids a cult reading of the film. Furthermore the film has a large amount of generic hybridisation - melding as it does the horror elements of the werewolf sub-genre, thriller elements, the red herring structure of an Agatha Christie whodunit and various blaxploitation signifiers. Shot largely on location in the Surrey countryside surrounding Shepperton Studios the film makes use of some great rural countryside, especially in the sequences which open the film. 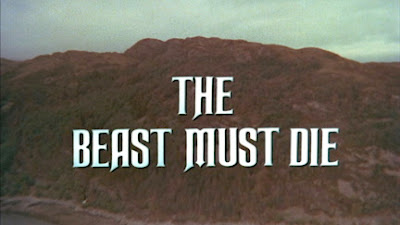 Newcliffe is a self made millionaire whose great passion is big game hunting - and after putting the high tech surveillance equipment he has had installed at great expensive through its paces he announces to his assembled guests that one of them is a werewolf. He has long dreamed about bagging himself such a beast, and his belief in such creatures is unshakeable. After outlining the potential guilt of each guest Newcliffe keeps them prisoner for the three days in which the full moon shines, and makes sure there is plenty of wolf bane about to get up their noses. This naturally leads to a couple of routine escape attempts and an odd car chase sequence which is a bit out of place. As well as having cameras in the trees and microphones in the earth, he has also bugged every room and spends a lot of time hanging out with sceptical Polish surveillance expert Pavel (Anton Diffring - in a rare sympathetic role). Newcliffe’s voyeurism is only mentioned briefly, but both men take an unhealthy pleasure in surreptitiously watching the behaviour of others. The tension begins to slowly build as Michael Winder’s screenplay gives each suspect a couple of scenes to raise doubts about their claims of innocence. 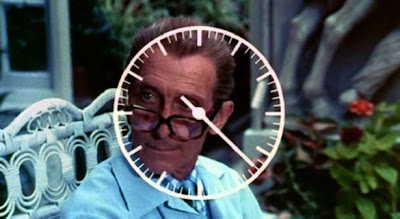 Where the film really does succeed is in its casting of the werewolf suspects. Dr. Christopher Lundgren (no relation to Dolph) is played by the brilliant Peter Cushing, and when he isn’t playing chess with Arthur Bennington (Charles Gray) he is expounding on his favourite subject of lycanthropy. Marlene Clark plays Newcliffe’s wife Caroline, and they both discover plenty about each other that they didn’t know after years of marriage. Jan Jarmakowski (Michael Gambon) is a concert pianist who seems to be followed by violent death and Paul Foote (the hero of the James Blish story There Shall be no Darkness on which the film was based and played by Tom Chadbon) is the ex medical student turned artist who once ate human flesh. The long haired and bearded Foote is one of the most memorable characters in the film. The final guest is Davina Gilmore (Ciaran Madden) the lover of Gambon’s pianist and like the other female lead rather bland and unmemorable. The film gets a lot of mileage out of the interactions and rising tensions of these characters who find themselves imprisoned against their will and at the mercy of a leather clad hunter with a gun fetish. By and large they all perform admirably, which is as well, because Lockhart is an extraordinarily poor actor. 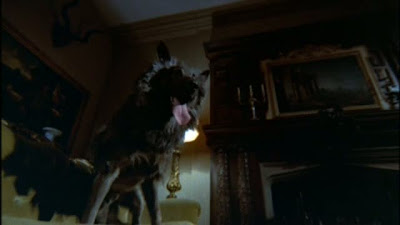 Another criticism the film has endured over the years is of the werewolf itself. There isn’t really a transformation scene at all, instead director Paul Annett just cuts away, and when we see the beast it is merely a dog with some extra fur attached and it is somewhat disappointing. But this decision does give the film a number of striking aerial shots when Newcliffe boards a helicopter and gives chase. Although this marks the film out as different, the scene where the beast is fighting the helicopter pilot are reduced in impact when you see the dogs tail wagging! The death of Pavel is a highlight when the beast jumps down at him through a window and leaves his corpse eyeless in a most ironic fashion. Unfortunately the direction is particularly insipid and pedestrian, with few noteworthy or intriguing shots, but fortunately this doesn’t affect the pacing of the narrative too badly. The funky score by Amicus regular Douglas Gamley emphasises the action elements rather than the horror aspects and adds to the blaxploitation feel. The Beast Must Die is far more entertaining than it has any right to be, it has a cheerfulness of tone which is not even alleviated when the infected Newcliffe kills himself at the end.
Posted by Shaun Anderson [The Celluloid Highway] at 16:21