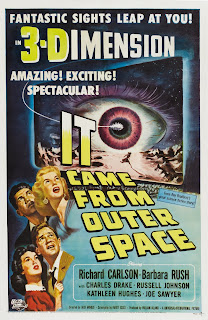 
The 1950’s was a wonderful boom period in the production of science-fiction films in the United States. This resurgence was shaped by a number of factors - both internal to the film industry and external in the wider fabric of society. The first and perhaps most crucial of these from an economic point of view was the creative dead end that the horror genre had found itself in post World War Two. The genre had largely been shaped by émigré directors under the auspices of Universal studios, but the horrors of war and the genre’s increasing stupidity and self parody opened up new terrain for a hybridised genre that mixed the conventions of horror within a discussion of contemporary technology. It was crucial for the horror genre to continue in some form in this age because of the uncertain political and social climate and the latent fears therein - the conventions of horror were still useful in addressing these anxieties. Hollywood quickly set about reconstituting and exploring these fears in a form that was more acceptable and exciting to an ever growing and affluent teenage audience, and the result was the horror/science-fiction hybrid. I prefer to the view the invasion narratives of the 1950’s as a hybridisation of horror and science-fiction because the removal of the formal attributes of either genre leads to a collapse in the effectiveness of the film. 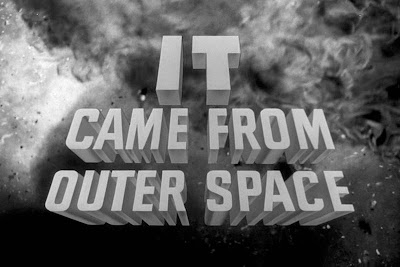 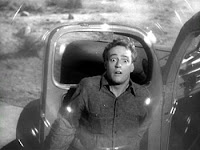 From an external point of view Hollywood found itself dealing with a changing market place that it always seemed one step behind. Instead of setting the pace Hollywood found itself following enterprising production outfits like American International Pictures, who along with other independent producers, would benefit tremendously from the de-monopolisation of the vertically integrated system of production, distribution and exhibition that had unfairly tipped the marketplace in Hollywood’s favour for decades. Furthermore the film industry as a whole had to deal with the rise of television and the concomitant rise of suburbia. A change in tactics was needed at all levels of the production process. The films themselves had to offer pleasures and spectacle that television could not (3D, Cinemascope, Panavision etc) and exhibitors had to be increasingly clever to lure audiences to the theatres. The science-fiction/horror hybrid seems to me representative of these changes, offering the spectacle of outer space, giant insects and alien technoligies. But the true value of these films were their ability to address social and political tensions in an allegoric fashion that horror alone struggled to achieve. 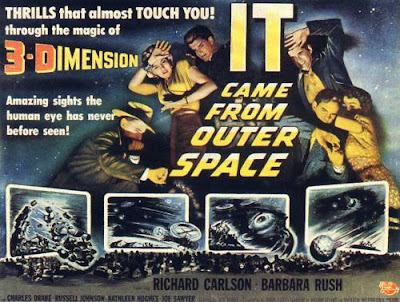 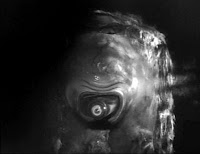 The alien beings in It Came from Outer Space are neither hostile or aggressive - which indicates immediately a more daring attitude to the material that places it in the same philosophical universe as The Day the Earth Stood Still (1951). The aliens have accidentally crash landed on Earth en route to another destination. Their goal is simply to repair their damaged spacecraft and escape our planet with the minimum of fuss and attention. If faced with violent behaviour they naturally respond in kind - making these aliens clear reflections of ourselves. The peaceful intentions of these beings poses a challenge for those who like to view the 50’s invasion narratives through the lens of the communist threat. Instead the quiet pacifism of the aliens is used to highlight our own prejudices and discriminations. The director Jack Arnold is more interested in interrogating questions of tolerance, charity, and acceptance. These are themes that would recur throughout his films of the 1950’s. 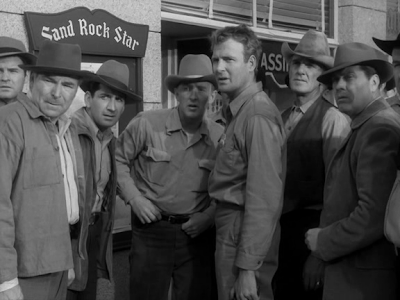 The typically bland hero of the piece is John Putnam (Richard Carlson) who is an amateur astronomer holed up in a desert community that has bestowed upon him the status of outsider. This status which is signified by him living out of town predictably leads to him allying himself with the aliens and offering a point of sympathetic contact. Putnam’s eventual return to community comes as a result of him shaming the townsfolk for their lack of understanding and tolerance. The film benefits tremendously from a very literate and at times poetic screenplay by Harry Essex which is based upon the short story by Ray Bradbury. It is a screenplay more interested in characters than it is the spectacle of science-fiction. It finds time to give even minor characters the opportunity to add a philosophical layer to the proceedings and infuses characters with a depth unusual for this type of film. 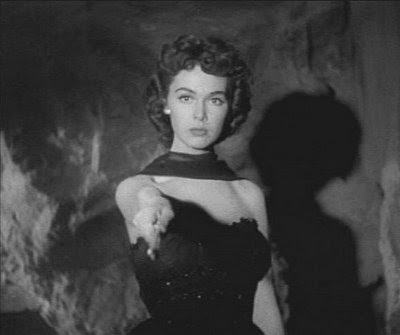 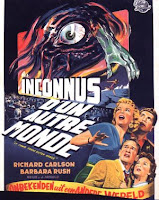 The barren isolation of the desert setting is utilised to great effect, and it would be one that Arnold would return too throughout his science-fiction films. The camera lingers on oddly shaped cacti and strange rock formations in order to evoke the alien and otherworldly nature of the landscape. Often the human characters look as out of the place in this inhospitable terrain as the one eyed aliens. The creatures themselves are, as expected, less than impressive and something of a let down, but the opening sequence which shows their alien vessel crash landing more than makes up for their shortcomings. Unusually for the period the film also affords the aliens a point of view shot giving them a sense of identity and subjectivity that was rare at the time. Also thrown into the mix is the thematic potential of body snatching - the aliens possess the ability to create facsimiles of the townsfolk, though unlike the pod people of Invasion of the Body Snatchers (1956) this is in order to keep the peace. This was the first of Universal International’s sci-fi/horror films and it is easily one of the most thoughtful and literate of its era.
Posted by Shaun Anderson [The Celluloid Highway] at 15:00