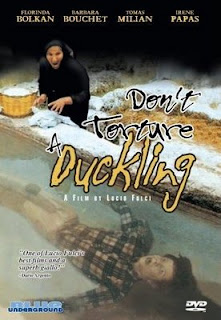 
Lucio Fulci is now a name that is firmly associated with a series of highly stylised and graphically violent horror films which he made between 1979 and 1983. This cycle of films, in a long and generically diverse career, eschewed a plausible attitude to plot construction and were riddled with the numerous continuity errors that came with a more surreal outlook to editing. In a peculiar twist of fortune this fragmented approach to screen time and space created an hallucinatory atmosphere which was highly appropriate to the Lovecraftian imagery on display. Whilst much discussion has centred on questions of authorship throughout Fulci’s oeuvre, it is perhaps more illuminating to approach his work from the position of genre. Fulci was one of many filmmakers operating in Italy that reacted to popular cycles, and he was particularly adept at shifting into different terrain. It was almost inevitable that Fulci would turn his hand to the gialli and his first attempt was the obscure curiosity Perversion Story (1969, aka One on Top of the Other). He followed this with A Lizard in a Woman’s Skin (1971), Don’t Torture a Duckling (1972) and The Psychic (1977). Don’t Torture a Duckling is easily the most accomplished of these and emerges as not only an excellent example of the form, but also as a strong contender for Fulci’s finest film. 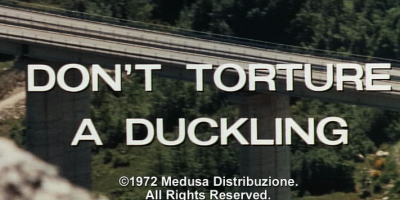 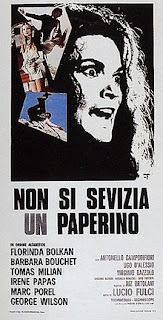 Unlike Fulci’s later horror films which gleefully did away with causal logic, this particular films sits within a genre that is reliant on a strong narrative structure. With three writers on board (Fulci, Roberto Gianviti and Gianfranco Clerici) the omens aren’t good, but this film is refreshingly well plotted, and puts a number of other gialli to shame in the satisfying manner in which the story plays out. Fulci and his collaborators are only content to utilise the basic conventions of the form and  infuse the story with dark and supernatural undertones the like of which Fulci used to great effect later in his career. The key difference here though is in the setting. Most gialli situate their tales in the middle class apartments, art galleries, and streets of modern European Capital cities. This particular entry situates its action in a rural part of Northern Italy, and this setting allows Fulci to develop the themes that are clearly close to his heart. The theme of superstition is a major motif, witchcraft and the occult are touched upon, and it is redolent in a community of insular peasant folk intolerant to outsiders and ignorant of the perversity in their midst. Instead of building up a series of incidental red herrings, the supernatural itself acts as the red herring here. The film overflows with an unsettling and disturbing atmosphere of repressed sexuality and adult perversion. The depths of adult morality are plumbed amid a culture of hypocrisy and orthodoxy. One only need to look to the scene in which Patrizia (Barbara Bouchet) reclines naked on a chair and proceeds to prick tease an underage boy to see the position the film takes.

Don’t Torture a Duckling is a subversive attack on many aspects of rural Italian life. The insularity of the community is over-emphasised, the inhabitants adherence to outmoded moral codes are struck down, and all this exists beneath the asphyxiating clutch of Catholicism. This sense of repression and strangulation is reinforced by the unremitting brightness of the whitewashed walls of the village, labyrinthine streets, and humid woodlands. The villagers mistrust strangers, especially those from the cities, and regard them with fear and suspicion. They mete out their own brand of backward vigilante justice, which includes the harrowing and brutal chain whipping of a local woman suspected of being a witch. This scene offers a chilling pre-warning of the excessive violence to come in later Fulci films. In the best gialli fashion the local police force are depicted as ineffectual bunglers, and the responsibility of finding the culprit behind a spate of vicious child murders falls to two amateurs from the city. That they succeed where the local police fail offers no doubt as to where the film stands in relation to the dichotomy between the modernity of the city, and a rural village dominated by catholic doctrines. 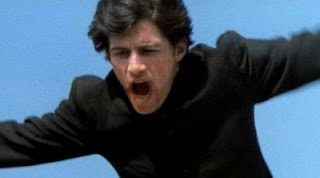 The motives of the murderer remain one of the most fascinating aspects of this film. Instead of coming from some perverse psycho-sexual realm, the motive instead belongs to a an overzealous moral idealism shot through with the tenets of catholicism. The killer seeks to preserve the innocence of childhood by eliminating those children who have become infected by the polluting tentacles of city life. This is an ideological killer whose response to the vice and immorality of the modern world is to embark on a murderous crusade. The killer meets his maker in unforgettable fashion as Fulci pulls out one of the best climaxes to be seen in any gialli. The stifling summer heat of Northern Italy and the sun bleached walls of a harsh and unforgiving village become a metaphor for a society crushed beneath the fears generated by religious orthodoxy. This is a brilliantly structured statement by Fulci and his co-writers which is brought to life by vivid direction, excellent performances, and an appropriate score by Riz Ortolani.
Posted by Shaun Anderson [The Celluloid Highway] at 22:11