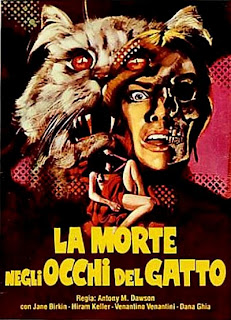 
Seven Deaths in the Cat’s Eye is a serviceable and entertaining murder mystery, but one which sits uncomfortably within the giallo genre that history has consigned it too. The film makes far more effective use of its various gothic elements than it does the chic and camp ephemera of gialli. Instead of the action residing within the modern architectural centre of a bustling European city, we instead find ourselves in a small castle in the highlands of Scotland. There is little sense of a wider world, aside from some investigating police officers who regularly appear from nowhere during the film. The insularity and claustrophobia of the isolated setting adds a great deal of atmosphere to the proceedings as director Antonio Margheriti efficiently works through the conventions of the gialli plot. The plot complexities and the mounting red herrings do at least place this film within the narrative structure of the gialli, but visually this is one of the more unusual examples.

The only indication of the modern world is signified by Lady Mary MacGrief’s (Francoise Christophe) anxiety about the financial ruin of the MacGrief clan. The MacGrief’s are no longer able to afford the foreboding Dragonstone Castle which initially sets up a series of red herrings motivated by inheritances and wills. The castle itself is a wonderfully baroque setting with gargoyles, a family crypt, a damp underground cellar replete with a mouldering corpse the rats are fond of (this death opens the film in suitably gory fashion), secret passageways, a maze, and acres of wild and barren woodland surrounding it. Into this charged environment comes Corringa (Jane Birkin), a relative and an innocent sexually repressed woman fresh out of convent school. The various characters that assemble at Dragonstone are all damaged in some way and are all potential murderers. The murderer is particularly resourceful though and makes use of a mythical family curse to add a layer of the supernatural to the proceedings. After the smothering of her mother, Corringa makes an unlikely ally with the hypersensitive and withdrawn Lord James MacGrief (Hiram Keller) who covers up his vulnerability and loneliness by appearing insane with acts of boorish rudeness - one of the best is an early dinner part scene in which he manages to offend every guest. He is also a painter and philosophiser and has a homicidal pet Orang-utan - another pointless red herring, but one which adds a strange and surreal tone to the overall effect.

One of the weaker aspects of the narrative is the gimmick of the pet cat witnessing each murder. The arrival of the cat instantly indicates a death is on the way and much suspense is thus eliminated. This seems like a commercial gimmick in order to take advantage of having an animal in the title and linking it to the Argento inspired gialli which did the same. Other pointless aspects include a stupid undercurrent of lesbianism, and far too many incidental characters - the whole thing seems a little cluttered. Anton Diffring adds some much needed class as the sleazy Dr. Franz who has been brought in to cure the Lord’s malady, but is more intent on personal gain. The killer is of course almost impossible to predict and as per usual is a bolt out of the blue, and the film which up to this point had been slow and talky seems intent on rushing the climax. To take advantage of the casting of Jane Birkin, Serge Gainsbourg pops up in a pointless cameo as a Police Inspector who knows more than he lets on. Margheriti’s direction is assured as one would expect from such a journeyman filmmaker, but like many other filmmakers working in this genre he seems to have a fondness for zooms. These zooms add significance where there is none and are an irritating distraction. His attitude to colour isn’t though and along with his cinematographer Carlo Carlini manage to compose some very well lit scenes. The funeral of Corringa’s mother is a visual highlight, as is a nightmare vision Corringa has of her vampiric mother.

By and large the screenplay which was penned by Margheriti and Giovanni Simonelli and based upon a novel by Peter Bryan (the writer of several Hammer screenplays including Brides of Dracula (1960) and The Plague of the Zombies (1966)) holds itself together and is certainly less convoluted and congested than other examples of the form. But at far too many moments the narrative seems to run out of steam and meander lifelessly from one scene to the next. Fortunately this slovenly progress is offset by some beautifully composed shots and a tense soundtrack by Riz Ortolani. Seven Deaths in the Cat’s Eye doesn’t pull any punches with its violence and there are number of well mounted set pieces, but this energy is only fleetingly glimpsed. Belonging more to the mould of the West German Edgar Wallace Krimi films and the gothic horror of Mario Bava this film is well deserving of 95 minutes of anyone’s time.
Posted by Shaun Anderson [The Celluloid Highway] at 21:21