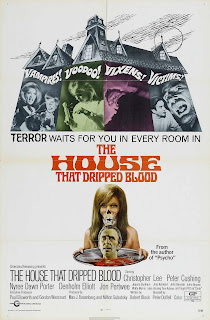 
Despite being hamstrung by one of Max J. Rosenberg’s silliest and most inappropriate titles (the director Peter Duffell wanted the far superior Death and the Maiden) The House that Dripped Blood is easily one of the finest, if not the finest, anthology horror film too emerge from Amicus Productions. Brilliant casting, excellent writing, and most importantly, unusually good direction give these simple morality tales an impressive veneer that Amicus only reached on a few exceptional occassions. If the film does have a weakness then it lies in the rather feeble and half-hearted framing narrative. This sees Detective Inspector Holloway (John Bennett) from Scotland Yard investigating (this involves sitting around, drinking tea, and being told creepy stories!) the recent disappearance of actor Paul Henderson (Jon Pertwee). The estate agent, who is named A. J. Stoker (John Bryans) in one of numerous self reflexive touches, expresses dire warnings, but they ultimately go on deaf ears as the film reaches a somewhat predictable climax. 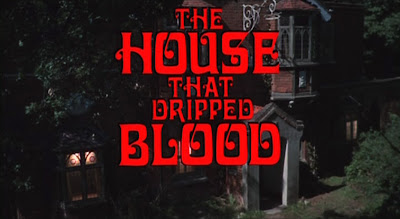 All the tales came from the pen of Robert Bloch, who is one of the greatest writers of that dying art - the short story. He was no stranger to the slipshod approach of Amicus having provided screenplays for The Psychopath (1966), The Deadly Bees (1967) and Torture Garden (1967). Fortunately its fourth time lucky! The opening tale Method for Murder gets things off to an atmospheric and creepy start as horror writer Charles Hillyer (Denholm Elliot) rents the eponymous house in a bid to loosen up his writers block. He succeeds admirably in this and is so proud of Dominick (the insane villain with a penchant for strangulation in his latest work) that he begins seeing him for real. Duffell makes excellent use of the stairs, the windows, reflections, and shadows to build a palpable sense of impending doom, that its something of a letdown when we discover it is a plot between Hillyer’s wife Alice (Joanna Dunham) and her secret lover Richard (Tom Adams). It wouldn’t be an Amicus film if there wasn’t at least one story involving a greedy husband/wife/relative trying to get their hands on an inheritance. The ’twist’ which sees the personality of Richard subsumed into that of Dominick is a somewhat contrived end to a neat little opener. 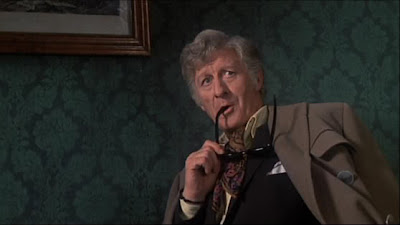 The second tale Waxworks raises the bar considerably. Here we see retired stockbroker Phillip Grayson (Peter Cushing) enjoying his retirement by reading, listening to music, going for picturesque walks in graveyards, and ultimately being decapitated. On discovery of a lurid and cheap Chamber of Horrors in town Grayson and his mate Neville (Joss Ackland) are both haunted by the similarity between a life like model of Salome (the dead wife of the museum’s proprietor) and a lover from their past who jilted them both. The highlight here is a chilling nightmare scene - all greens and reds and weird camera angles -  and Cushing’s outstanding wardrobe. An excellent montage of images which shows the solitude, frailty, and vulnerability of Grayson accompanied by Schubert’s "Death and the Maiden" adds a touch of class. The director cleverly locates the action in different rooms of the house, shoots entirely in daylight, and includes a number of fine location shots to provide contrast with the dark ambience of the opener. 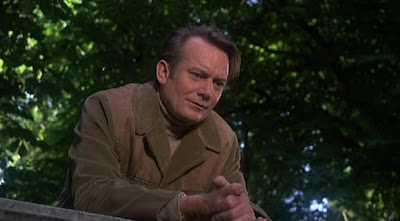 The third story Sweets for the Sweet features a typically dour and ramrod straight performance from Christopher Lee as the very strict and authoritarian single parent John Reid. After employing Ann Norton (Nyree Dawn Porter) to teach his daughter Jane (Chloe Franks) his behaviour toward the child takes a sinister turn. This story builds subtly and Lee does an excellent job of making his character very unsympathetic to add impetus to the final revelation. Jane’s fear of fire, her knowledge of trees, and the figurine she has made out of wax offers disturbing evidence of an ability that Ann is not in time to intercept. A series of committed performances aids this rather static, but nevertheless very chilling tale, which subverts the innocence and purity of childhood to good effect. 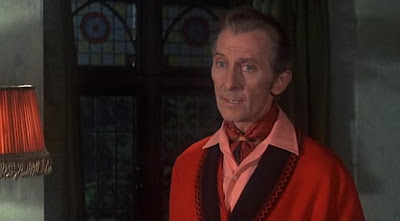 The final tale The Cloak is my personal favourite. It features a storming turn by Jon Pertwee as the arrogant and dandyish horror actor Paul Henderson. He comes out with such self referential lines as “That’s what’s wrong with the present day horror films. There’s no realism. Not like the old ones, the great ones. Frankenstein, Phantom of the Opera, Dracula - the one with Bela Lugosi of course, not this new fellow”. After insulting the wardrobe mistress Henderson decides to find his own costume and unwittingly obtains a cloak from a retiring vampire (Geoffrey Bayldon). Every time Henderson dons the garment the fangs appear, his reflection vanishes, and he finds himself floating toward the ceiling! This tale gets in a lot of digs at low budget horror producers, and shows at least that Amicus were willing to send themselves up. Able support from Ingrid Pitt adds the requisite touch of glamour that had been somewhat lacking in the film up until then. The House that Dripped Blood is worth watching for this segment alone and caps off a delightful anthology that has far less weak links than is normally the case for the portmanteau format.
Posted by Shaun Anderson [The Celluloid Highway] at 15:59