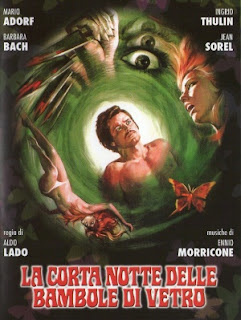 
Short Night of Glass Dolls is easily one of the most intelligent and stylish gialli to emerge out of Italy in the 1970’s. It marked the debut to feature filmmaking of Aldo Lado whose contributions to the giallo sub-genre are often overlooked. This is probably because he only directed two - but both this and Who Saw Her Die? (1972) have a thematic unity and a deftness of touch which separates them from those efforts which simply sought to regurgitate generic conventions. The subversion of the generic terrain is most prominent in Glass Dolls. This is one of the few gialli for example that has no major set piece murder scenes. It does away with the subjective point of view shots, it avoids slipping into the territory of camp, and has a general air of minimalism and subtlety that allows the unusual narrative to have space to breathe and develop. This is a fractured mystery which relies on the memory of the protagonist - and this immediately indicates the possibility of an unreliable narrator. Therein lies the inbuilt tension of the film, a tension that rarely lets up as the film twists and turns it way to an unforgettable and thoroughly disturbing climax. 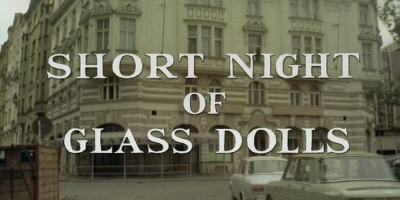 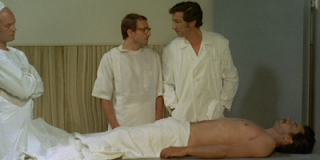 The film opens with the discovery of what we believe to be a corpse in a Prague plaza. An imaginatively shot title sequence follows which gives us a POV tracking shot of the ambulance winding its way through the labyrinthine streets on its way to the hospital. The body is that of Gregory Moore (Jean Sorel) an American journalist on assignment within the oppressive regime of a communist controlled government. The first surprise of the film comes when the body starts to narrate its own predicament in a voice over. Moore is not dead, but in fact lies in a state of paralysed immobility. What follows is Moore’s attempts to piece together just exactly how he came to be in this dilemma. This is a brilliant narrative device because it allows the mystery to unfold entirely within the realm of a subjective flashback. Regularly these flashbacks are interrupted by a return to the hospital as Moore often breaks up his reverie with an attempt to show he is still alive. This gives the film a tense and disjointed quality which is further developed through Lado’s almost subliminal editing strategy. We can literally see the pieces of a jigsaw being slotted into place as the past events begin to take shape. 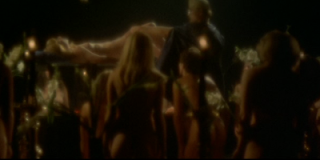 The mystery begins when Moore’s beautiful girlfriend Mira (Barbara Bach) suddenly disappears from his apartment. Suspicions are aroused due to the fact that she didn’t take any of her belongings with her. With the assistance of fellow journalists Jacques (Mario Adorf) and Jessica (Ingrid Thulin) Moore begins his own investigation despite violent threats from the authorities. After a little digging he discovers that Prague has a long history in which young woman have vanished and pretty soon he uncovers a far larger and odious conspiracy centred around the activities of the mysterious Club 99. At this point the real message of Lado’s film begins to shine through as he attacks the vile decadence of an older and power hungry generation. The club’s members include retired politicians, doctors, actors, artists, and musicians - and these aged monsters will stop at nothing to cling onto the power they believe is rightfully theirs. They do this by preying, like rapacious vampires, on the younger generation. An element of black magic is brought in, but this is only to give the sacrificial images a supernatural resonance that adds to the anxiety of the protagonist. The orgy scene is shot in slow motion and is oddly revolting - largely due to the large amount of fat middle aged naked flesh on show. But the corruption and profligacy of this ugly elite is hammered home with unrelenting precision by a politically motivated filmmaker. 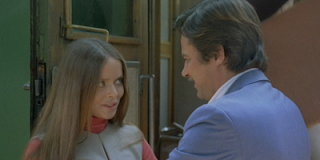 It is unclear whether Lado is simply attacking communism. He seems to be making a larger and all encompassing vision of the generational divide and the nature of power in the modern age. What the communist setting does achieve though is a constant atmosphere of oppression, an icy sensation of brutal authoritarians, and the strangulation of freedom. No other gialli to my knowledge sets itself within the ideology of the iron curtain and this film benefits tremendously from the inbuilt tone of a society devoid of liberty. The original title of the film was The Short Night of the Butterflies which made use of a very effective symbol and metaphor that recurs in the film and  gives this gialli a much more artier feel than many of its contemporaries. The manner in which the plot unfolds, the political message, and the unique setting all give this film an unusual flavour and indicates that within the right intellectual hands the giallo could provide a very good form with which to make a statement.
Posted by Shaun Anderson [The Celluloid Highway] at 20:43