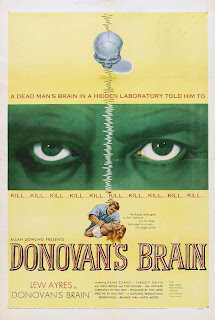 
Writer/producer/director Curt Siodmak was an instrumental figure in establishing the cross pollination of horror and science-fiction in the 1940’s and 1950’s. This émigré filmmaker who hailed from Dresden in Germany, wrote key screenplays for Universal’s The Wolf Man (1941), the Val Lewton produced I Walked with a Zombie (1943) and the brilliant Earth vs. The Flying Saucers (1956). But his most celebrated work was his 1942 novel Donovan’s Brain. It immediately proved a durable and adaptable narrative with an early film version appearing under the title The Lady and the Monster in 1943. In 1944 no less a talent than Orson Welles was suitably impressed by the pulp premise that he commissioned a two part radio production. In 1962 an Anglo/German production entitled The Brain directed by Freddie Francis appeared, but it is the 1953 version featuring Lew Ayers and Gene Evans that remains the most fondly remembered. The premise might be utterly ludicrous, but the notion of disembodied brain’s controlling and dominating susceptible minds became a remarkably pervasive science-fiction staple. From low grade imitations like The Brain from Planet Arous (1957), The Brain that Wouldn’t Die (1962), and the slightly more impressive Fiend Without a Face (1958) to the Steve Martin vehicle The Man with Two Brains (1982), Siodmak’s influence has resonated down the decades. 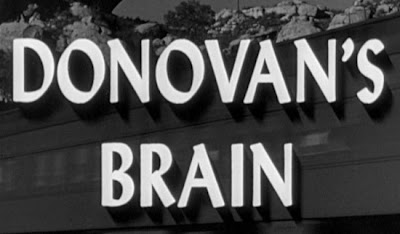 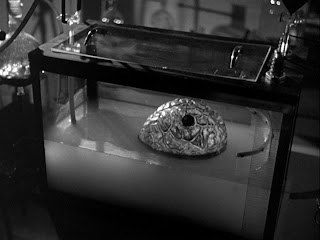 The 1953 version was adapted by Hugh Brooke with a screenplay provided by the director Felix E. Feist, and it was independently produced before obtaining distribution through United Artists. Feist is a somewhat undistinguished and unmemorable filmmaker and he brings little in the way of cinematic dynamism to this movie. But the decision to shoot in black and white is by and large a sensible one and the cinematographer Joseph F. Biroc achieves some measure of success in his lighting strategies. The laboratory which houses the brain, although incredibly cramped, is given a few suitably gothic touches towards the films climax. But overall Donovan’s Brain is lacking in the atmosphere and style of the Universal horror films it most closely approximates. Instead the emphasis is placed squarely on the performance of Lew Ayers as the research scientist Dr. Patrick Cory. As a scientist Cory is incredibly well intentioned, he is aware of the ethics and morality of his experimentations, and is generally speaking a very principled scientist. When the corpse of millionaire W. H. Donovan comes into his possession, Cory sees an opportunity to experiment with a human brain and is quite willing to break the law in order to achieve his scientific breakthrough. 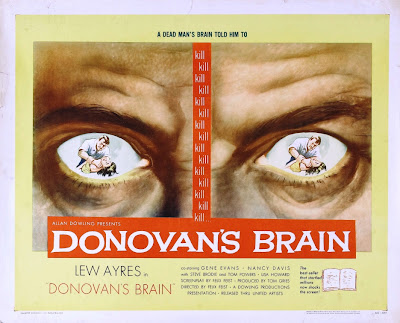 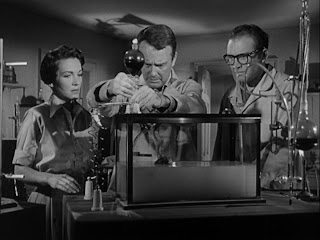 Donovan by contrast is a ruthless and vindictive individual who will stop at nothing to continue his economic rise. In fact he is so determined in this that his disembodied brain retains his dominant will and effortlessly possesses the weak and vulnerably Cory. Much of the enjoyment in the film comes in seeing the affable Cory consumed by Donovan’s petty will, forced to perform acts of blackmail and cruelty to further Donovan’s wicked plans. Pretty soon Donovan has Cory dressing like him, smoking the same brand of cigars, and most tellingly assuming the limp that plagued Donovan in life. The two definite things in life are death and taxes, but Donovan has managed to avoid both. The second part of the film sees Donovan’s human puppet attempting to keep in place the delicate web that has enabled him to evade tax for so long. The pro-science themes are set up in opposition to the evils of capitalism. Although Cory sets in motion the chain of events, it is Donovan’s putrid love of money and power that becomes the motivating force. As if to physically confirm Donovan’s repulsive lust for wealth his brain glows and pulsates in its tank, and steadily grows, gorging itself on the life fluid that fills its new habitat. Against expectation the brain does not leave the tank, a decision which benefit’s the film. Instead Donovan utilises telepathy to destroy those who stand in his way. 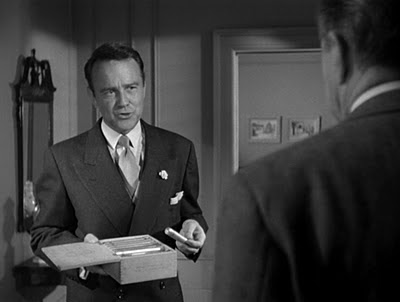 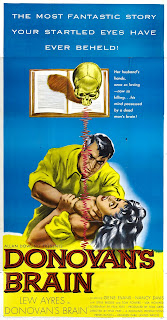 This telepathic control is extremely well conveyed through impressive sound design, the one filmmaking technique that achieves a zenith of stylistic excellence in an otherwise unobtrusive cinematic endeavour. Like most science-fiction/horror pictures of the 1950’s Donovan’s Brain suffers from abysmal dialogue and the prevailing sexism of the day. The phrase ‘eye candy’ doesn’t really apply to Nancy Davis (later Reagan) who plays an unlikely character that shifts from being ordered to make dinner to research assistant in the blink of an eye. Gene Evan’s brings life to the film as the alcoholic Dr. Frank Schratt, a man who is only too aware of what the pulsing brain is up too, and effectively performs the role of emotional counterweight to Cory/Donovan. In an interesting generic inversion the evil brain is actually destroyed by an all too convenient bolt of lightning that strikes a rod on the roof of the house. This event is traditionally the symbol of creation in films involving mad science and reanimation. Perhaps this is the most radical moment in Donovan’s Brain, a sequence which breaks with a past tradition in attempting too establishing something new. On the whole though it doesn’t quite work, and although this remains my personal favourite version of the tale, in the grand scheme of science-fiction in the 1950’s this is a minor footnote.
© Shaun Anderson 2011
Posted by Shaun Anderson [The Celluloid Highway] at 17:13