The Monster that Challenged the World (1957) 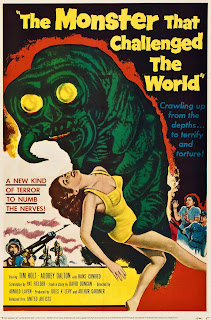 
The Monster that Challenged the World is a curious little film from 1957 that is very undeserving of the relative obscurity it has endured. The essential premise borrows liberally from the giants of atomic age science-fiction, but presents the material in a charming and self-effacing spirit made all the more enjoyable by the likeable characters. The story was written by David Duncan who had put his name to such productions as The Black Scorpion (1957), Monster on Campus (1958), The Leech Woman (1960) and most notably of all The Time Machine (1960). Although the film expresses anxieties towards radiation and secret scientific endeavour, the threat to civilisation is never implicitly linked to the effects of atomic testing. Instead an earthquake on the Californian coast creates a fissure in the depths of the Salton Sea which releases an army of enlarged blood sucking molluscs. This exactly mirrors the erupting volcano that creates an opening in the earth to release the giant scorpions of Duncan’s earlier The Black Scorpion. In both of these films the natural world has a destructive capability that matches anything the scientists can conjure up in their laboratories. The Black Scorpion was refreshingly bereft of atom age paranoia, but with its naval base setting The Monster is unable to avoid getting tied up in tensions between science and military. However this remains a subtext here, what emerges as the strongest element of this narrative is professionalism, collusion, respect, and a communal sense of pulling together for the greater good. 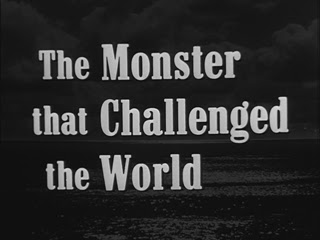 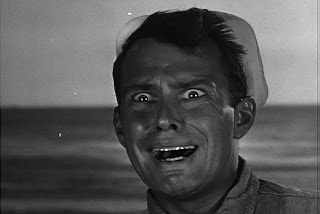 The film benefits from the interesting and unusual coastal setting. With the Salton Sea located directly on the San Andreas fault a certain plausibility informs the opening events. Events that are communicated in part by the obligatory voice over. For a change though the narrator is neither intrusive or pompous. The saline lake is the site of parachute jumps and unnamed scientific tests, and when one such jump ends in bizarre tragedy the naval authorities are on hand to conduct the investigation. Much of the narrative is given to the efforts of Lt Cmdr John Twillinger (Tim Holt) to bring the base together and create a culture of harmony and cooperation. He initially does this with a bullish and no-nonsense attitude which mellows as the film progresses. The important point here is that Twillinger’s character actually develops. His attitude to children, and his emotional understanding toward secretary Gail MacKenzie (Audrey Dalton) humanises the character and gives him dimension. Hans Conried is equally likeable as lead scientist Dr. Rogers, whose initially spiky releationship with Twillinger thaws and blossoms into a genuine friendship. The film presents the opposing attitudes of the military and the scientific and bridges the gap with credible moments of human frailty. These moments are allowed to flourish because by and large the film follows the structure of a police procedural. 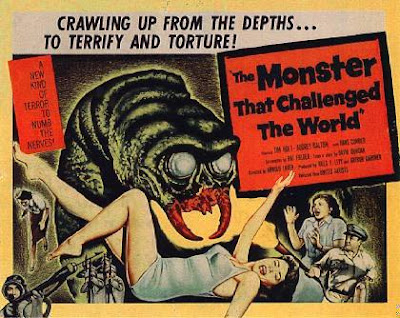 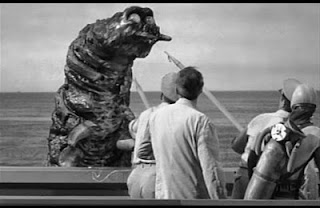 The main clue is the sticky white secretion left behind by the creatures, who begin to terrorise the inhabitants of a small coastal town. This leads to beach closures, encounters with argumentative local businessmen and the deaths of two young swimmers. I think a certain Mr. Spielberg may well have been impressed by this film as a youth. Another lift from The Black Scorpion sees two scientists conduct an underwater investigation into the lair of the oversized slugs. Only one returns, but he manages to secure an egg which is then kept at a secure temperature in the base. This plot device leads to one of the films worst and best moments. The series of events that lead to the egg hatching is abysmally written and a major weakness of Pat Fielders screenplay. However the sequence that follows in which Gail and her daughter are terrorised by the newly born (but yet still gigantic) mollusc is superbly composed by director Arnold Laven. Holt’s expression of terror as he fends the beast off with a fire extinguisher is one of the few moments of 50’s sci-fi that feels genuine. This finale comes at a point when the main threat has been contained and is highly critical of the scientific curiosity that leads up to it. 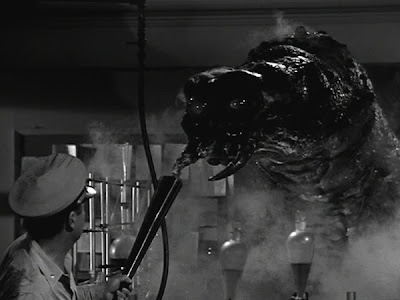 The titles for these films are often wonderful, but also a complete fabrication of the content. But then The Monster that Challenged a Small Coastal town in California hardly possesses marquee value. However the idea of the creatures using the complicated series of canals in California’s Imperial Valley is a disturbing and effective one. Much time is wasted in the final third of the film hanging around these canals, but the death of one canal keeper is a highlight because of an excellent use of off screen space. The creatures themselves are impressively designed and certainly not as silly as they sound on paper. A few ill advised close ups shatter the illusion, but by and large the molluscs are an admirable threat, and the shrivelled corpses they leave behind suitably grisly. Much of this of course will feel very familiar, but there is just enough in The Monster that Challenged the World to separate it from its more derivative contemporaries. There is an interest in character, an interest in relationships, a surprising emotional core, a peculiar monstrous threat, and ultimately a very neat affirmation of the prevailing values of the day.
© Shaun Anderson 2011
Posted by Shaun Anderson [The Celluloid Highway] at 15:55