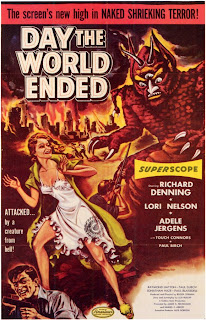 
Day the World Ended was Roger Corman’s third official film as a director and his first major foray into the realm of science-fiction. Corman has quite rightly become a cult hero, the messiah of low budget guerrilla filmmaking. But I’m under no illusion that his greatest contribution to cinema came as a producer. There is an easy temptation to be overly generous towards Corman’s 1950’s productions because of the esteem that enthusiasts of genre cinema hold him in. This is often the same attitude taken toward AIP, the production company to which Corman had an intimate relationship. Whereas most directors would be pilloried for amateurishness, Corman’s brand of amateur filmmaking is celebrated. But in the case of Day the World Ended the incompetence of the novice filmmaker is not alleviated by an intelligent screenplay, nor is it saved by an enthusiastic tone - the film is actually incredibly ponderous and suffers from a solemnity that becomes quite irritating at times. I understand that the end of the world is a serious matter, but Lou Rusoff’s screenplay makes no effort to lighten a leaden tone. One would imagine that working within such a sombre and ominous framework the film would be afforded the philosophical and metaphysical insights of serious drama. Instead it opts for the sensational and ultimately comes across as a stupid and empty rip off of Arch Oboler’s far superior Five (1951).

As is often the case with low budget 50’s B movies the tone is lightened with unintentional hilarity. This is provided by some abysmal dialogue, a couple of uproarious fistfights (replete with shaking walls) and a bug eyed, steel clawed, radioactive monster that is mercifully kept off screen as long as possible. The film seems intent on communicating to the audience that this should be taken completely seriously. Rusoff’s screenplay goes as far as including a spiritual subtext, with biblical proclamations vying for screen time with an Adam and Eve finale. Corman illustrates his contempt for the audience’s intelligence by ending the film with “The Beginning” emblazoned on the screen as the hero and heroine stroll off into the fallout of the future. One of the more amusing aspects of this film is seeing the attempts of the filmmakers to provide gravitas in the face of rampant sensationalism and exploitation. To be fair they give it a go, and even in his filmmaking infancy Corman shows a talent at bridging these two seemingly opposing forces. 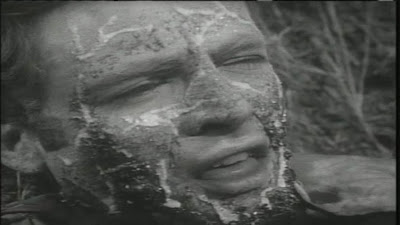 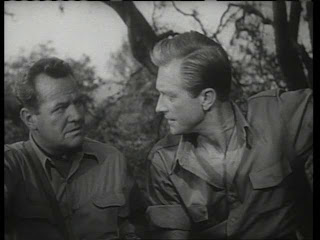 The apocalypse is signified with the tremendously imaginative use of mushroom cloud library footage before the obligatory narrator makes doom laden pronouncements. Unfortunately (and I rarely say this) the narrator is dropped far too quickly. The opening moments of the film cry out for more detailed exposition, without it the premise becomes absurdly contrived with each character appearing out of nowhere in the space of a few minutes to descend on the house of Jim Maddison (Paul Birch). Jim is a taciturn old bastard, a retired naval captain whose certainty of mankind’s impending nuclear annihilation led him to select his place of abode carefully. His house is situated in a deep rural valley, secure from the dangers of radiation because the mountains are lined with lead ore. He has planned for this eventuality, so the arrival of six strangers on his doorstep is extremely unwelcome. How these six individuals find themselves in the middle of nowhere at the same time remains unexplained, and it doesn’t seem to bother Maddison, who accepts them all, and thrives on giving out orders and generally being the man. 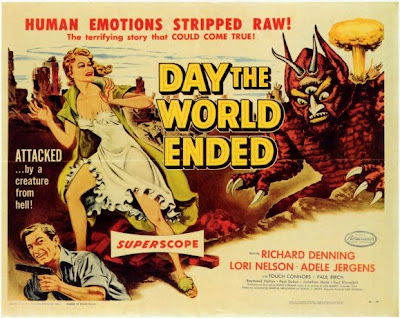 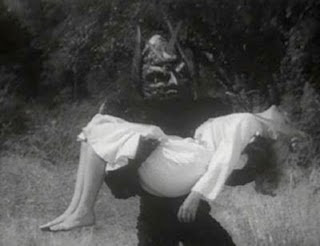 Each character is a representative of a certain set of values. The geologist Rick (Richard Denning) is the square jawed all American hero, he shows all the scientific know how of a block of concrete, but he can handle a gun and that’s all that matters. The crooked Tony (Mike Connors) is the criminal scum who creates much of the tension in the household. He is desperate to get the gun, but even more desperate to fuck Jim’s daughter Louise (Lori Nelson). Tony is without a doubt the best thing about this movie. He’s a true low life who stabs his sluttish girlfriend Ruby (Adele Jergens) and then throws her body off a cliff with a “happy landing”. The power struggle within the Maddison house revolves entirely around who has possession of a gun. Which is perhaps the most depressing aspect of the entire film. If internal tensions aren’t enough (and we have a couple of bikini clad swimming scenes just to make things a little hotter) the surrounding countryside is being stalked by a frightening presence. It is something that the diseased Radick (Paul Duboy) fears and hates, and so he should, he’s about to become the same. But Radick has already succumbed to cannibalism, which gives him a monstrousness that the radioactive creature lacks.

The identity of the beast and the subtle way the film alludes to it is the most intelligent and effective moment in the entire film. It is in fact the only aspect of the film that makes it worth watching. Its death in purifying and radiation free rain is an oddly poignant moment, in a film almost totally devoid of pathos. Even the death of Jim is dealt with swiftly. But the camera lingers on the death throes of the pitiful mutation as if to suggest the sympathies of the film lie with it. The ultra low budget of $96,000 and the reputed nine day shoot takes its toll on Corman’s stylistic and formal choices. This is an incredibly static picture. Corman’s camera is barely mobile, and the tableaux set ups give the film a stiff and stagy theatricality. There is too much talk, and Corman is unable to enthuse these moments with energy or dynamism. Not for the first time Corman’s own shortcomings as a filmmaker contrive to damage the film. Why he chose to shoot in Superscope is anyone’s guess because the black and white cinematography was hardly pushing boundaries. Corman’s use of the frame is consistent with the rest of the film - uninspired and inept.
© Shaun Anderson 2011
Posted by Shaun Anderson [The Celluloid Highway] at 21:08