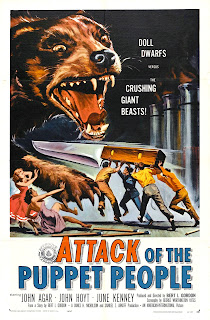 AKA:
Six Inches Tall
I Was a Teenage Doll
The Fantastic Puppet People


It was very difficult for me to resist a film with the title Attack of the Puppet People, but I wish I had. This flimsy waste of celluloid was created entirely to cash in on the success of Universal-International’s intelligent and philosophical The Incredible Shrinking Man (1957). The perpetrators of this mindless travesty were AIP, an independent production/distribution company I have a love/hate relationship with. At times I think AIP are treated a bit too charitably, and while they did produce some worthy additions to popular American genres, this particular movie is one I could have done without. The paper thin screenplay was concocted by sci-fi stalwarts George Worthing Yates and Bert I. Gordon. Yates had shown some flair and intelligence with the writing of Them! (1954) and Earth vs. The Flying Saucers (1956), unfortunately flair and intelligence are in very short supply with this movie. Perhaps the fault rests more with Wisconsin born director/writer/producer Bert I. Gordon. This was his fifth feature film and the previous four King Dinosaur (1955), Beginning of the End (1957), The Cyclops (1957) and The Amazing Colossal Man (1957) were only distinguishable for their special effects and perhaps their stupidity. Gordon’s films however possess a charm that is highly infectious, which makes Puppet People’s hollowness all the more surprising. 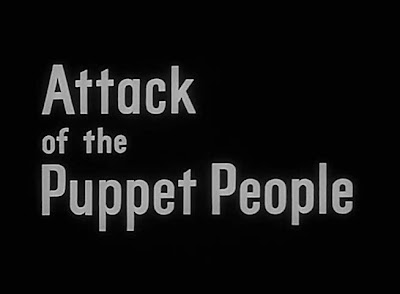 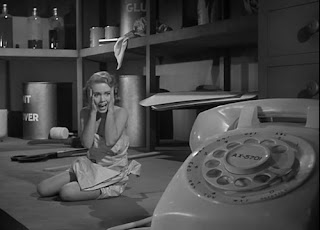 One of the major weaknesses of the film is a central villain who quite simply is not villainous enough. Mr. Franz is the owner of Dolls Incorporated a small toy manufacturer operating out of a non-descript office block. Franz is a gifted artist and at one time performed marionette shows throughout Europe. John Hoyt adopts a slight accentuated twang to his voice, but the characters origins remain an underdeveloped aspect of the plot. His one defining feature is autophobia, a fear of loneliness that drives him to perform the maniacal act of shrinking human beings to the size of dolls and collecting them to compensate for the anxieties that solitude may bring. In addition to his skill at creating toys Franz is also something of an inventor on the side, and the machine he has created to perform his acts of molecular shrinkage represent some of the daftest writing in 50’s sci-fi. Franz is unhinged, but he is not evil. In fact the performance of Hoyt is one of the few acceptable aspects of this misguided venture. He brings a certain emotional pathos to the character, and comes across as a rather tragic and pathetic individual. Nevertheless he does keep the diminutive people prisoner and when they are released from their containers he forces them to perform for his enjoyment. However on occasion the cruelty of the dictator does shine through, but one’s affection for Franz is never usurped due to the abysmal supporting characters that populate the film. 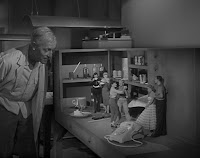 The puppet people are led by Bob Westley (John Agar) a typically bland 50’s sci-fi hero with no intriguing characteristics at all. By this point Agar was a veteran of such productions as Revenge of the Creature (1955), Tarantula (1955), The Mole People (1956), and The Brain from Planet Arous (1957). He brings absolutely nothing to this movie, and nor does June Kenney as the love interest Sally Reynolds (apart from the obvious that is!). Their characters are so thinly sketched that even the inevitable police investigation into their disappearance is perfunctory at best. The plot is set up in a way that makes the audience expect a revolution against the tyrannical rule of Dr. Franz, but initially at least several of the shrunken simpletons are very happy with their lot. It takes Bob and Sally about three minutes of screen time to convince them all to oppose Franz and what precedes is one of the most fitful and ineffectual ‘attacks’ in cinema history. The truly odious aspect of this film is the flagrant manner in which the audience are cheated. In fact the film is far more comfortable with the padding represented by the character of Emil, a subplot which goes absolutely nowhere, but adds a precious ten minutes to the running time. 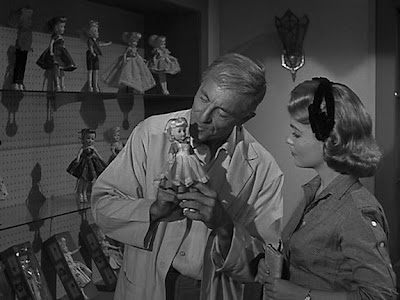 Bert I. Gordon also created the special effects for this film, and I suppose in a way one could argue he is an auteur of sorts. His films certainly possess a visual and stylistic uniformity, even if his themes have failed to develop beyond adolescence. The effects are less impressive than those seen a year before in The Incredible Shrinking Man, but Gordon does manage one or two moments of inspiration. A tiny cat in a matchbox for example, Bob’s violent attack on a Mr. Hyde dummy, Bob and Sally terrorised by a vicious looking dog, the human puppets attempting to use a phone. But with the exception of the cinematography by Ernest Laszlo an air of amateurishness pervades the production. The lack of an attack by the puppet people is a travesty, but the film plumbs untold depths with the truly lame ending. The feeble and derisory way the film concludes will leave even the most charitable viewers repulsed. This is a frustrating film because there was obvious potential here. AIP and Bert I. Gordon clearly thought it was enough to simply replicate the photographic effects of The Incredible Shrinking Man, but by dispensing with the thematic and philosophical depth of Jack Arnold’s film, Attack of the Puppet People becomes an empty vessel.
© Shaun Anderson 2011
Posted by Shaun Anderson [The Celluloid Highway] at 22:04