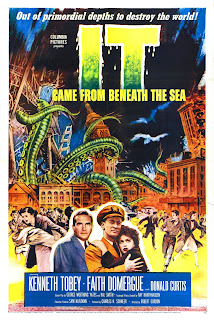 AKA:
Monster from Beneath the Sea


It Came from Beneath the Sea marked the first occasion that producer Charles H. Schneer and visual effects wizard Ray Harryhausen collaborated. The two filmmakers would establish a partnership that would survive throughout the 1950’s, 1960’s, and 1970’s finally coming to rest with Clash of the Titans (1981). This alone provides the movie with historical importance, even if the content was highly derivative and presented in a somewhat staid and lifeless fashion. Harryhausen’s art was still very much in its infancy at this point, the animated effects he provided for The Beast from 20,000 Fathoms (1953) marked him out as a rare and special talent, and here he gets an opportunity too expand his scope with the creation of a giant Octopus. The earlier film is an important reference point because Beneath the Sea is virtually a carbon copy, and adds very little to what was presented in 20,000 Fathoms. It also lacks the charm and dynamism of the earlier picture and a comparison between the two sees Beneath the Sea come off significantly worse. It is possible the film was also influenced by the success of Gojira (1954), itself hugely indebted to 20,000 Fathoms, but important for continuing to prove their was an eager market for giant radioactive creatures from the ocean depths. 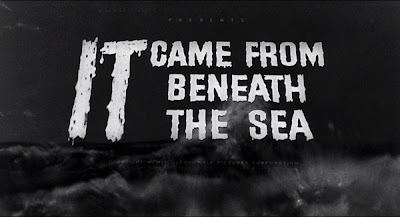 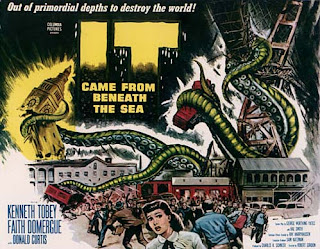 Perhaps the most notable talents behind the picture at the time were the writers George Worthing Yates and Harold Jacob Smith. The former contributed the story for Them! (1954), adapted Conquest of Space (1955) and wrote screenplays for Earth vs. The Flying Saucers (1956), War of the Colossal Beast (1958) and Earth vs. The Spider (1958). The latter contributing screenplays for The River’s Edge (1957) and The Defiant Ones (1958). It has to be said that this movie isn’t their finest hour. A major weakness is the infrequency with which see the Octopus in the first hour. The screenplay saves it all for up for the last fifteen minutes, this wouldn’t be so bad, if it wasn’t for the proliferation of static scenes in offices and laboratories. The first hour is marked by a lot of talk, and a remarkable lack of urgency on the part of the US Navy and the Pentagon officials who are far happier taking positions of scepticism rather than action. The film opens with a gushing celebration of nuclear driven technology as it shows off the latest naval innovation of atomic submarines. If we didn’t get this by the use of patriotic library footage, the inane and irritating narration that plagues the film informs us of the magnitude of such scientific endeavour. But this is a film paranoid about the effects of radiation and pretty soon the submarine’s commander Pete Matthews (Kenneth Tobey) is facing an unknown radioactive threat that only goes too emphasis the limitations of modern technology. 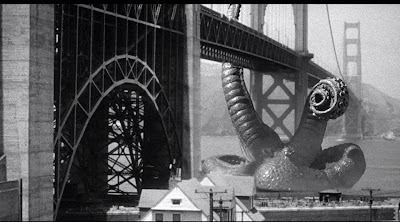 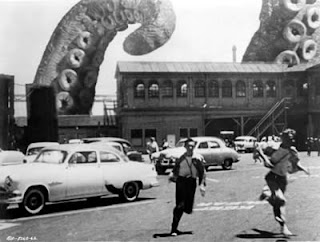 It turns out of course that the military are to blame with their pesky H-bomb tests. The contempt shown for the animal kingdom in these type of films is only matched by their crassness, and by default I always find myself cheering the mutated marauders. In this case the oceanic intruder is impressively conveyed. This is one of Harryhausen’s most successful creations of the 1950’s and it is shown off too excellent effect when it entwines itself around San Francisco’s Golden Gate bridge. It has to be said though that the benighted beast enacts a rather limp revenge against mankind. It succeeds in terrorising the coast of California, but its efforts to punish the city dwellers are ineffectual and pretty soon it has been driven back to the sea by the blazing scourge of the flamethrower. The screams of agony from the mutant as the flames lick at its tentacles is one of the most memorable scenes in the film. The body count is disappointingly low and the carnage minimal, a lacklustre display which would have had Godzilla hanging his head in embarrassed shame. 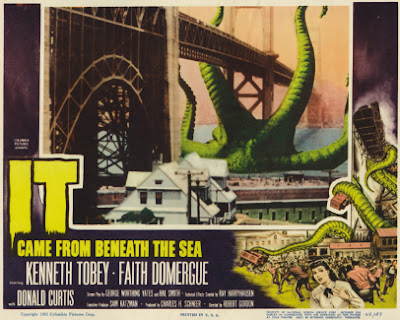 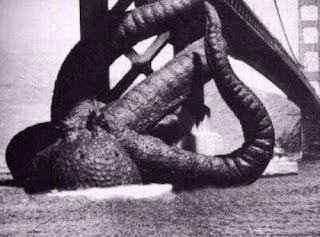 ﻿The movie in fact seems far more interested in a petty and perfunctory romantic subplot featuring Pete Matthews, Prof Lesley Joyce (Faith Domergue), and Dr. John Carter (Donald Curtis). A pathetic kind of love triangle develops between the three, who find plenty of time to indulge in trivialities while tankers are being destroyed by a radioactive monster. The proto-feminism of Professor Joyce gives Faith Domergue something to get her teeth into, and she emerges as a reasonably well rounded character battling the prevailing sexism of the day. That doesn’t stop her falling for the rugged charms or the crisp white naval uniform of Matthews though. Matthews himself is a no-nonsense kind of guy who spends most of the film squinting and smoking, but it is good to see Kenneth Tobey take the lead for once. Ultimately however the characters are unengaging and it becomes patently obvious that the romantic subplot has been entirely invented for the purposes of padding out a very thin and insubstantial narrative. Although the film essays a paranoid view of the pitfalls of atomic power, it is the atomic submarine which eventually saves the day. This offers the typically contradictory view of the majority of these mutated monster movies. What begins as a potentially subversive and radical statement about the abuses of nuclear power concludes conservatively, and celebrates the efficiency of the power, a power that caused the problem in the first place.
© Shaun Anderson 2011
Posted by Shaun Anderson [The Celluloid Highway] at 21:11