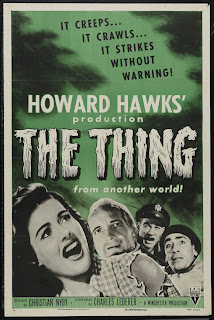 
Howard Hawks’ production The Thing from Another World is a towering heavyweight within the landscape of 1950’s science-fiction. Its status as such is in fact highly contestable however because this was the first notable occasion that the tropes of the horror genre were melded seamlessly with that of science-fiction. Like the alien creature that terrorises the isolated Arctic outpost this is a product of hybridity, an example of generic interbreeding that evolved a new form. For this to succeed one requires generic expertise, and none were more savvy at delivering assured genre pieces than producer/director Howard Hawks. The notion of an alien invader intent on the destruction of the human race is now riddled with cliché, but in 1951 this was a narrative innovation for cinematic sci-fi/horror. Hundreds of invasion narratives ebbed and flowed from this one important example, their attitude and politics may have differed, but the template remained unshakeable. The source material came from acclaimed sci-fi writer John W. Campbell Jr. whose short story Who Goes There? first appeared in the August 1938 edition of Astounding Stories. It might be a surprise to some how little Charles Lederer’s screenplay resembles the story, preferring as it does to just adopt the basic premise. For a more rigorous and authentic adaptation one should look no further than John Carpenter’s 1982 remake. 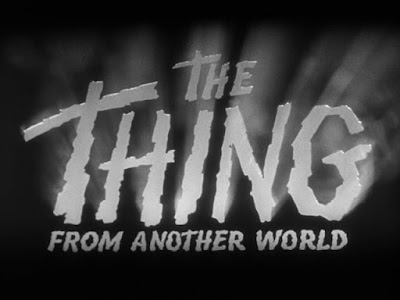 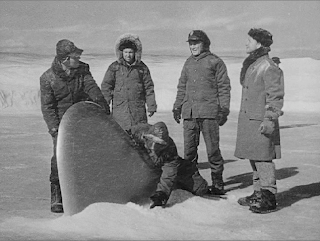 Instead the basic plot elements of Campbell’s story are utilised as a peg to hang a number of Hawks’ prevailing values and to flag up tensions between the oppositional forces of the military and science. The discovery of a flying saucer buried in the Arctic ice feeds directly into the prevailing UFO craze of the early 1950’s, and the unearthing of the spacecraft’s sole occupant adds another layer of anxiety. The creature turns out to be of plant origin, with a proclivity for blood, and possesses an ability to regenerate damaged tissue. Our few brief glimpses show him to be a brute, seen mostly in shadow, we are however witness to him throwing dogs hither and thither, indicating an impressive strength. The occassions when do get to see the creature are predictably disappointing. But we are still treated to the films greatest shock moment when it looms menacingly behind a door. The thankless role went to James Arness who quite rightly bitched about the inadequacies of the monster. But ‘The Thing’ is merely a plot device that propels the conservative agenda of the film. The real concern lies in the fraught and tense exchanges between military representatives led by Captain Pat Hendry (the excellent Kenneth Tobey) and the research scientists led by Dr. Carrington (the equally superb Robert Cornthwaite). The screenplay gives a luxurious amount of time to exploring their opposing positions and thus gives the film a well developed philosophical layer. 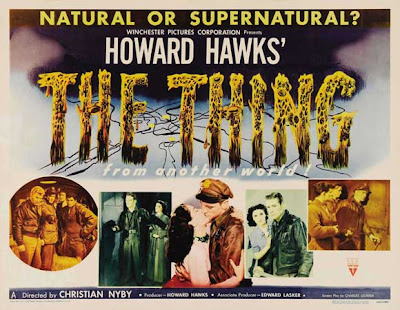 The military are the unbending conservative presence here. Hendry and his cohorts have no thought in their mind other than the complete destruction of the alien vegetable. Hendry is even willing to risk court martial to see to its annihilation. There is no curiosity and absolutely no hint of collusion for the purposes of research. Hendry is only comfortable when creating tactics for defence and plotting strategies of attack. Yet Hendry is humanised by the camaraderie of his colleagues and his romantic interest in Nikki (Margaret Sheridan). Much of this humanity is achieved through a warm hearted brand of comedy that offers a contrast to the bitter icy wasteland outside. Carrington on the other hand is a dandyish type - he strolls around in a silk dressing gown and sports a perfectly manicured goatee. His radicalism is as much indicated by his faint effeminacy as it is his scientific attitude. Carrington is desperate to communicate with ‘The Thing’ and is convinced the creature harbours a wisdom that sets it above mankind. His willingness to sacrifice human lives for the discovery of the alien’s knowledge is a shock moment and one which illustrates perfectly his extremism. The outcome of this struggle is entirely dependant on which position the filmmakers side with, and its not a huge surprise that a production led by Howard Hawks opts for conservative values and the electrocution of the alien interloper. Carrington’s position is found wanting, his attempts to communicate with the unthinking beast swept aside in an act of violence. 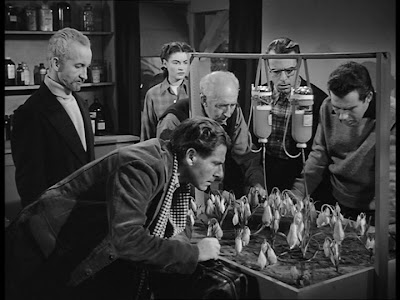 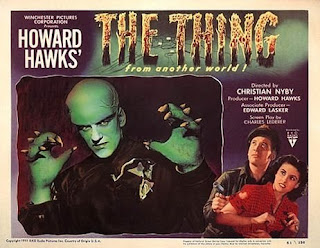 The direction of this film has long been contested. The credit went to Christian Nyby who was making his feature film debut, but the film has an assured confidence which suggests that Hawks had a very active role. Other evidence stacks up in Hawks’ favour; the razor sharp overlapping dialogue, the efficient pacing, the humour, and male solidarity. Intriguingly though it is Nikki who alights on the idea to destroy ‘The Thing’, though this is somewhat undermined by the fact that the inspiration for it comes from time spent in the kitchen. Although the film lacks major science-fiction spectacle (save for an excellent scene in which ‘The Thing’ is set alight in a confined room) it does possess a wonderful sense of space thanks to location work in Montana’s Glacier National Park. The dependable score by veteran composer Dimitri Tiomkin both enhances the claustrophobia and ratchets up the tension when ‘The Thing’ is present. Often the creature’s presence is indicated by the ticking of a Geiger counter, and tension mounts with an unnerving use of off screen space. In the past I’ve been accused of gleefully slaughtering the sacred cows of cinematic history, but I’m happy to let The Thing from Another World roam free in green and pleasant pastures.
© Shaun Anderson 2011
Posted by Shaun Anderson [The Celluloid Highway] at 21:59