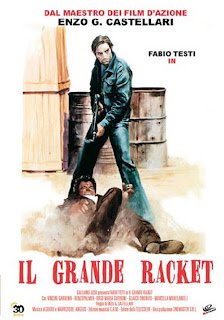 
The Big Racket was director Enzo G. Castellari’s third poliziotteschi thriller after the tremendous commercial success of High Crime (1973) and Street Law (1974). These two films were marked by high octane chase and action sequences, remarkable stunts, and imperiously charismatic lead performances by Franco Nero. In many ways both films were a fascistic celebration of rampant machismo and unchecked masculinity. A perfect case study for the concurrent feminism of the day. Suffice it to say The Big Racket continues Castellari’s macho ethos. The only female characters being a vile masculinised thug who is more at home kicking the shit out of honest businessmen than burning her bra, and a schoolgirl who commits suicide after being raped. Yes, we are once again in the polarised social firmament that marks the writing of Massimo De Rita and Arduino Maluri. Instead of Nero’s bristling moustache and piercing blue eyes we have the dark and swarthy casualness of Fabio Testi. Testi lacks Nero’s charisma, and seems to struggle with the burden of being the films moral centre. He is on much firmer ground playing the laid back undercover cop in Castellari’s fourth poliziotteschi The Heroin Busters (1977). In that film Testi is quite magnificent, but he seems ill at ease with the character of Inspector Nico Palmieri, and at times his performance is stilted and unconvincing. 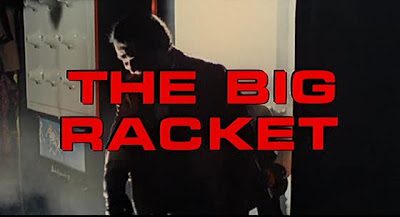 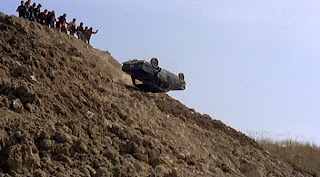 The film opens with a familiar Castellari technique; a montage of establishing set pieces. In this case illustrating the brutality and cruelty of the extortion of cash through protection rackets. The other thing the opening montage does is establish the monstrousness of the villains. In the best tradition of vigilante films, the villains are presented in such a way, that it is almost impossible for the audience not to cheer their violent demise. The reign of terror administered by these callow cowardly hooligans is propped up by a crime syndicate, the members of which time and again escape justice. Palmieri is determined to bring their terrorism to an end, but even he struggles to match them in the early exchanges. In one astonishing moment he and his car are pushed over the side of a huge embankment. A camera placed inside the car as it tumbles to the bottom gives the scene an intensity and immediacy which is staggering. Unfortunately the film doesn’t quite live up to this brilliant moment. It does give Palmieri the personal motive of revenge, but the pointless scenes of the detective convalescing seem unnecessarily long and padded. These shifts in tone and pace are unwanted. Nevertheless the writers should be commended for a multi-layered screenplay that does have a number of surprise moments. 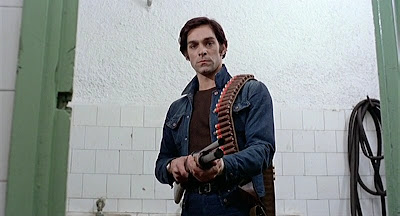 One of these surprises is Palmieri’s own proximity to criminality. In order to flush out the criminals he resorts to breaking the law. He cashes in a favour with gentleman crook Pepe (Vincent Gardenia) in order to gain information. This plot event ultimately leads to his dismissal, and it as this point where The Big Racket really takes off and heads unexpectedly into the terrain of the vigilante film. The template for the final third is The Dirty Dozen (1967) as Palmieri goes about enlisting all those who have suffered particular hardship at the hands of the syndicate. Perhaps the most notable are restaurant owner Luigi (Renzo Palmer) whose daughter commits suicide after being raped (the films most controversial scene) and Olympic rifleman Gianni (Orsa Maria Guerrini) who is punished for assisting the cops in a stakeout by having to watch his wife get gang raped before being burnt alive. Palmieri cynically plays on the emotions of his rag tag bunch of haunted survivors, but their thirst for revenge is only too understandable. 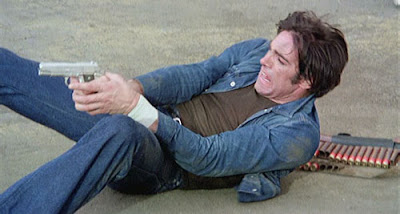 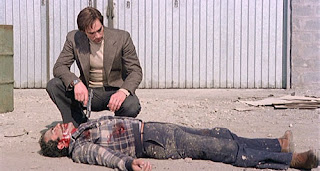 The stake out sequence in which good Samaritan Gianni assists Palmieri is a perfect illustration of The Big Racket’s strange inventiveness. It turns out to be a sting within a sting, and in one deft moment suggests that the criminal conspiracy goes to the very heart of the legal authorities. The political ramifications of De Rita and Maluri’s screenplay are only too visible, which is why the film ends on such a bitter note of resignation. The finale occurs in Castellari’s favourite location for a poliziotteschi showdown; an industrial site. The moments leading up to the expected bloodbath ache with pregnant menace, and the attention placed on the flaky and nervous Luigi only adds to the tension. The showdown doesn’t disappoint (perhaps the only aspect of the film that doesn’t) and it is typically stylised. It overflows with rapid cutting, slow motion, close ups, and plenty of gushing exit wounds. The statement of intent by the surprise (but not really that surprising) man behind the syndicate in which he proposes a racket that will change the fundamental structures of society is disturbingly psychotic. Ironically his part in the proceedings end with him on his knees pleading for his life in a lavatory. The Big Racket is an acidic, indignant and embittered vision of failed institutions. Its currency is mistrust and paranoia and the final despairing freeze frame of an enraged Palmieri is the perfect note on which to end the film.