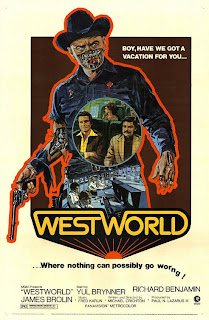 
Produced on a modest budget of $1.25 million by MGM Westworld was one of the most commercially successful science-fiction films in the age before Star Wars (1977). It marked the debut to feature filmmaking of Michael Crichton, who in the 1970’s contributed (either as writer or director) a number of interesting pictures within the ‘Revolt of Technology’ subgenre. The first was The Andromeda Strain (1971) which was based upon his novel of the same name and saw an alien virus come to earth due to technological efficiency. Also of note is an adaptation of his novel The Terminal Man (1974) which charts the effects of a microchip placed in a scientists' brain in order to control his violent seizures. Another major contribution was Coma (1978) which he also directed, and combined elements of the paranoid thriller with technological unease. But for me Westworld eclipses all of these efforts by some distance. It was Crichton’s clearest and most efficient distillation of his techno-phobic themes, but also displayed a brilliantly self aware attitude to genre which was never replicated in Crichton’s later career. Crichton’s awareness of icons, conventions, and expectations makes Westworld both fun and incredibly chilling.

The company Delos offers up to the public the cutting edge in amusement parks. Three spheres of representation and fantasy on one site; Romanworld offers the lust and debauchery of ancient Rome, Medievalworld offers court intrigue, pageantry and sword fights, and finally Westworld offers the brawls, gunfights, hard drinking and easy women of the wild west. These locations are populated by androids as white suited technicians sit in their control rooms making sure the guests have a great experience. Although Crichton’s screenplay doesn’t develop this theme Delos are in fact commercialising violence, death, and adultery. The androids become metaphors for oppression and their revolt is an understandable response to their exploitation. Delos are also selling a Hollywood constructed dream, which possibly excuses the incredible gender imbalance of Crichton’s film. This is a totally masculinised world, and although we do briefly glimpse female guests at the start of the film, the film opts too ignore their experiences. In a way this is what Hollywood has always done, so is this a symptom of 1970’s filmmaking or a clever attempt to show through the reconstructions of Delos the absence of female voices? 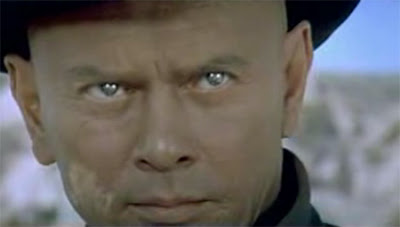 The manner in which Westworld satirises the myths of the wild west within a science-fiction framework is part of its charm. This is achieved through a regular cross cutting technique which shows Peter Martin (Richard Benjamin) and John Blane (James Bolin) adapting to their western experience and the laboratories and technical spaces of the engineers and scientists. This is the 1970’s remember so everything is white and clinical and the computers and mechanical gizmos are clunky and huge. The film does also attempt to satirise the rampant machismo of the wild west through the weedy character of Peter Martin, but all to quickly Martin becomes an efficient killer. The film steadily builds towards the predictable moment when the androids go haywire with a series of minor malfunctions, malfunctions that are overlooked by the capitalist forces that control the amusement parks. Although the malfunctions are never satisfactorily explained (a major plot weakness) Crichton does introduce the concept of a computer virus, a moment of prophetic insight which somehow humanises the androids and gives their rebellion substance. 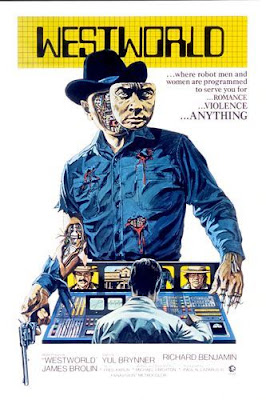 The chief example of this is the battle between Peter Martin and The Gunslinger (Yul Bryner). Having despatched the black dressed gunslinger twice before Martin and Blane are in no mood for him after a night of heavy drinking. The look of gleeful satisfaction on the gunslinger’s face after he has shot Blane almost suggests he is enjoying the cold pleasure of revenge. His silver eyes shine with delight throughout his stalking of Martin, who desperately flees through each resort to escape the violence of the automaton. Bryner is excellent here, and it is clear the heroism of his role in The Magnificent Seven (1960) is being subverted to terrifying effect. We are even afforded several point of view shots from the gunslinger, which gives the character a frightening autonomy and subjectivity. The stalking sequence sees dialogue almost completely excised as man does battle with machine. Although Martin cannot compete with the gunslinger’s efficiency or strength he is able to eventually outwit him. The most terrifying moment comes after Martin has damaged the android’s vision, as Martin shrinks in terror against a wall the inhuman look on the android’s face as it seeks its prey has stayed with me a long time. Fortunately for Westworld these moments come at a time when the film is just starting to lag, and the initial surprise of the premise has been forgotten. A sequel entitled Futureworld appeared in 1976 in which Bryner reprised his role, but it was a significant step down from Westworld.