The Revenge of Frankenstein (1958) 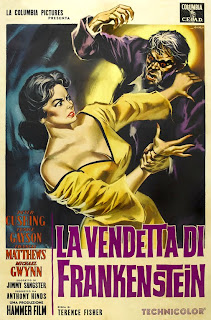 
Hammer Film Productions’ wasted no time in capitalising on the surprise commercial success of their first colour gothic horror film The Curse of Frankenstein (1957). Within a year Peter Cushing was once again impressing audiences with his coldly logical Baron Frankenstein whose steely determination to create life remained undiminished despite a close call with the guillotine. The manner in which Frankenstein survives his execution is further evidence of screenwriter Jimmy Sangster’s ingeniousness. The switch of victims that takes place at the inhospitable gaol is not simply a throwaway event intended to ensure the survival of the films’ lead character, but a fundamental plot element of the ensuing sequel. Sangster’s screenplay builds on this opening by showing the ruthless way in which Frankenstein plays on the vanity of the crippled gaoler Karl, and the terrible price that Karl pays for placing his trust in the aberrant scientist. Not only are we to enjoy the return of the impeccable Peter Cushing as a result of this plot contrivance, but also a deep moral and thematic terrain that interrogates questions of mental illness, trust, and the manipulation of pride and vanity. This thematic trajectory for me makes The Revenge of Frankenstein a far more rewarding experience than The Curse of Frankenstein, and helps it to take its position as the greatest Frankenstein film put out by Hammer. 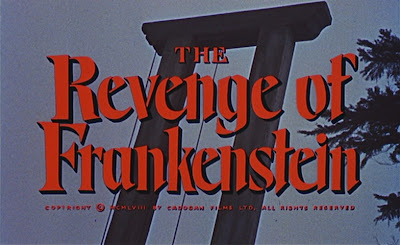 After barely escaping the meeting with his maker that Frankenstein deserved, Herr Baron sets up shop in the German town of Carlsbrück and changes his name to Dr. Victor Stein in order to ensure his anonymity. However Stein’s arrogance and sense of medicinal superiority has led to his practice eclipsing all the others, and the medical council seethe with jealousy and plot his downfall. This expands on an aspect of Frankenstein’s character not really explored in the first film; his status as a radical rogue outsider. The council choke on their own conservatism unable to accept Stein’s success because they have not been invited to be a part of it. Stein represents a force of political disunity which is further highlighted by his relationship to the poor. In order to offset the moral vacuum represented by his treatment of the cosseted and spoilt bourgeoisie, Stein spends his free hours treating the ailments of the poor in a suitably grim ward. This act of philanthropic benevolence is the means by which he is able to both continue his experiments and cover his tracks. Stein is amputating the perfectly healthy body parts of his trusting patients to build the new body he has promised for the crippled man who saved his hide. I think its important to recognise here, that while Stein is exploiting the poor, he is not totally ignoring them. The disgusted reaction of the medical council representatives is in its own way just as awful as what Stein is doing. 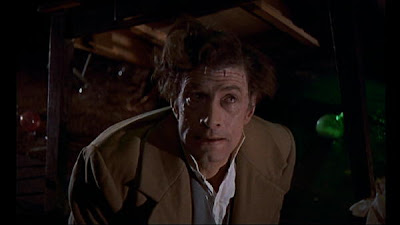 One member of the council Dr. Hans Kleve (Francis Matthews) recognises Stein for who he is, but instead of informing the authorities he joins Stein in his experiments. Both men are at odds with the stuffy procedures of the status quo and are eager for knowledge and success. Matthews provides an excellent foil to Cushing, but surprisingly the character of Kleve does not provide the moral conscious to Stein’s deeds. Instead this is represented by Karl (Michael Gwynne) whose transference into his new body, initially at least, succeeds admirably, and also by Margaret Conrad (Eunice Gayson) whose motivations truly are charitable. The horror Karl experiences at the thought of being paraded around in front of university students and lecturers across Europe (an example of Stein’s vanity and pride and his burning need to show off) motivates him to escape. After a life spent enduring the stares and finger pointing that comes with his deformity, Karl realises he has simply swapped one hell for another; the only difference now is that he can walk properly. His rebellion then is due entirely to the pride of Stein and Kleve, an ironic situation when it is precisely this emotion that Stein has manipulated and toyed with in the first place. Unfortunately Karl’s new body also rebels, a physical manifestation of rebellion as affective as Stein’s political rebellion. However in addition to a twisted body Karl now has the added bonus of cannibalism, a taste brought vividly to life in an incredibly brutal encounter with a sadistic janitor (George Woodbridge). The sight of Karl uncontrollably drooling at the sight of the corpse is one of Hammer’s most disturbing. 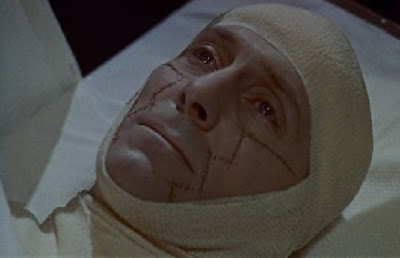 The clash of values between the bourgeois world of Stein’s wealthy patients and the vile and dirty poverty of his ward is illuminated brilliantly in a scene which sees Karl gatecrash a posh party. Is it embarrassment that briefly flits over the face of Stein when he sees his creation? Before his smugness is destroyed forever when Karl discloses his true identity. Stein’s fate at the hands of his exploited poverty stricken patients is a suitable conclusion and one which dramatically enacts the violence associated with class repression. One can’t help feeling though that the stuffy and self satisfied big wigs of the medical council are equally deserving of such punishment. The Revenge of Frankenstein is a major film in Hammer’s history; in scope and themes it is a far more adult film than the one it followed. It gives equal space and treatment to the effects of Frankenstein’s meddling and explores the moral price in a more rounded and intelligent way than any other Frankenstein film. Unfortunately the concluding scenes which see Frankenstein survive by having his brain placed into a new body (without any cannibalistic tendencies it would seem) and setting up practice in London shows the lesser side of Jimmy Sangster’s imagination.
© Shaun Anderson 2010
Posted by Shaun Anderson [The Celluloid Highway] at 18:06