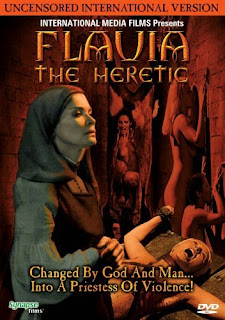 The uncut Region 2 DVD release of Flavia the Heretic by Shameless Screen Entertainment promotes the film with this incredible statement: “Witness the most notoriously graphic and nasty descent into the nunsploitation genre with Gianfranco Mingozzi’s unforgettable masterpiece of shock cinema.” I’m a big supporter of Shameless, but this has to be one of the most deceptive statements about a film I’ve ever read. Firstly Flavia the Heretic is only nominally part of the nunsploitation sub-genre, in so much as there are a few nuns in it. Secondly it is neither graphic or nasty, but then Shameless weren’t going to promote the film with accurate adjectives such as boring. Thirdly this is far from a masterpiece. The stock sub-generic images of lesbianism, sadomasochism, rape fantasises, torture, and the theme of repressed sexuality and desire are diluted to such a degree here that they are virtually non-existent. Instead Mingozzi’s film has broad and ‘worthy’ themes that ally it more to traditions of European art cinema rather than with a film like Behind Convent Walls (1978). We do get a scene in which a nipple is removed, and a scene in which a horse is castrated - but these moments are brief and purely for shock. The camera does not linger in the way it might in a purer example of exploitation and is more focused on seeking moments of symbolic value. A liberated nun sat inside the carcass of a cow for example. These images are noteworthy for the manner in which they work inside a highly symbolic film that is more concerned with interrogating issues of feminine subjectivity. Any erotic or salacious pleasure is soon halted by the apparent importance of Mingozzi’s allegory of female subjugation in an age of rampant religious and patriarchal oppression.

Mingozzi opens his film with a violent prologue that will haunt and shape Flavia throughout her life - the murder of a Moslem soldier by her aggressive and domineering father. This focal point is revisited a number of times in flashbacks and dream sequences, and indicates immediately the centrality of individual subjectivity to the film. This alone should tell anyone familiar with Nunsploitation that this isn’t going to be a regular example of the form. The emphasis on the self, Flavia’s alienation, and her struggle (read quest) places the narrative firmly within the strategies of art cinema. The defining characteristic in 1960’s and 70’s art cinema, one could argue, was in their shift from an objective and omnipotent perspective (still the case in Hollywood films), to an interiorised world of human subjectivity. The narrative was driven by character motivation, emotions and feelings, rather than the action of the plot. Flavia follows a similar trajectory and does so reasonably well. The question to pose with a film like this is whether the director intended all along to make an art film with some of the iconographic elements of genre, or whether it is an exploitation film that is trying to dress itself up as art. I’ll leave you to decide that one for yourself. 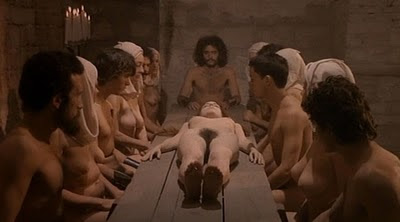 There is no doubt however that the filmmakers develop their themes and rationale in a lucidly delivered and eminently sensible fashion. In this historical period god is merely a device utilised by patriarchy to initiate a systematic campaign of control and domination. Flavia challenges this and is awoken to concepts of bodily liberation when her nunnery is invaded by a highly sexualised pagan cult. The use of certain historical facts by the screenplay writers lends Flavia’s rebellious feminist odyssey a ring of authenticity, and this resilient and driven heroine is brought to life by the strong persona of Florinda Bolkan. Bolkan had risen to fame in the late 1960’s after her appearance in Luchino Visconti’s The Damned (1969), but is more well known to lovers of European exploitation for her performances in Lucio Fulci’s gialli double Lizard in a Woman’s Skin (1971) and Don’t Torture a Duckling (1972). If the film succeeds on any level it is due to Bolkan’s towering performance, but her stern and dour demeanour makes her a difficult protagonist to like. One has to admire the bravery of the filmmakers in their attempts to allegorise the feminism of the 1970’s within a mediaeval setting, but does the film offer a progressive final message? The answer unfortunately is no. Flavia finds that the Moslem invaders who enable her acts of cruel vengeance simply have alternative methods to control and dominate their women. She is allowed to liberate the violence and sexuality that has built up inside her, but this is only one facet of her quest for total subjectivity. For those who are fans of the exploitation elements of Nunsploitation Flavia the Heretic is certain to disappoint, but fans of art cinema may find something of interest or value…but I wouldn’t bet on it!
© Shaun Anderson - 2010
Posted by Shaun Anderson [The Celluloid Highway] at 18:51